Binder to continue with Ajo KTM for 2019 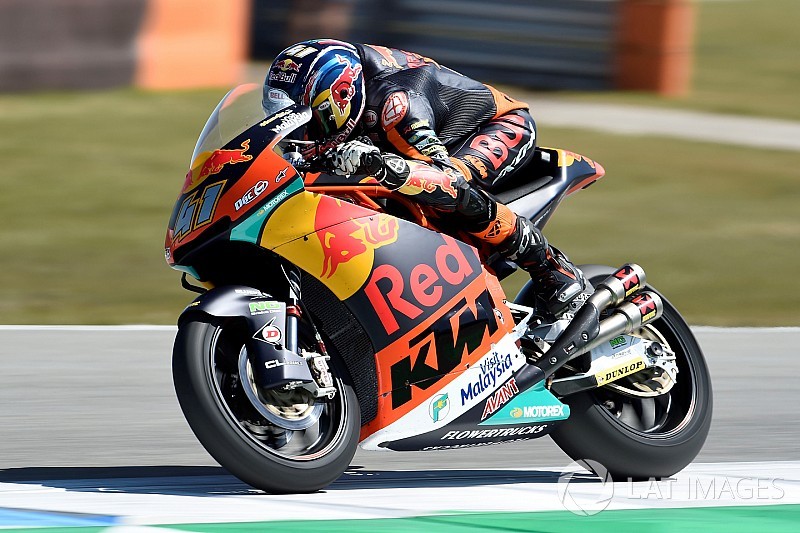 The Ajo KTM team will retain Brad Binder for a third Moto2 campaign in 2019, the South African signing a one-year deal to stay with the team for a fifth consecutive season.

Binder has been racing for the Ajo KTM team since 2015, and won the Moto3 title in 2016 before stepping up to Moto2 and finish eighth overall in an injury-disrupted rookie season.

He ended the 2017 season with three podium finishes but has yet to add more to his tally this year. His best result is sixth, which he has achieved five times in eight races.

Ajo has previously announced that it will replace MotoGP-bound Miguel Oliveira with Moto3 star Jorge Martin, who will be Binder's teammate in 2019.

"The new agreement we have signed this weekend is fantastic," said Binder, who is seventh in the standings, 62 points behind teammate Oliveira.

"I'm really excited to continue at Red Bull KTM Ajo for another year, making it five seasons with them!

"I feel that we still have unfinished business in Moto2, and great improvements to make, so I am very happy and it motivates me to have a whole factory supporting me again.

"That's what I wanted, because I'm very happy as part of this family.

"The goal is always to fight for the highest honours and I think we can achieve this. This year we had a difficult start, but I know we can be up there for the rest of the season.

Team manager Aki Ajo added: "I am very happy that we can confirm that Brad will be staying with us for another year.

"So far we have had a very successful relationship; this is our fourth season together and next year will be the fifth.

"We have never had a rider be part of our structure for so many years, so I am very happy. He is a rider with whom it is very easy to work, and I'm sure that he is one of the most dedicated in the paddock.

"He always wants to improve and that's the most important thing for growing as a rider. We are very pleased to be continuing with Brad and will try to finish this job that we started with him in Moto2 last year."