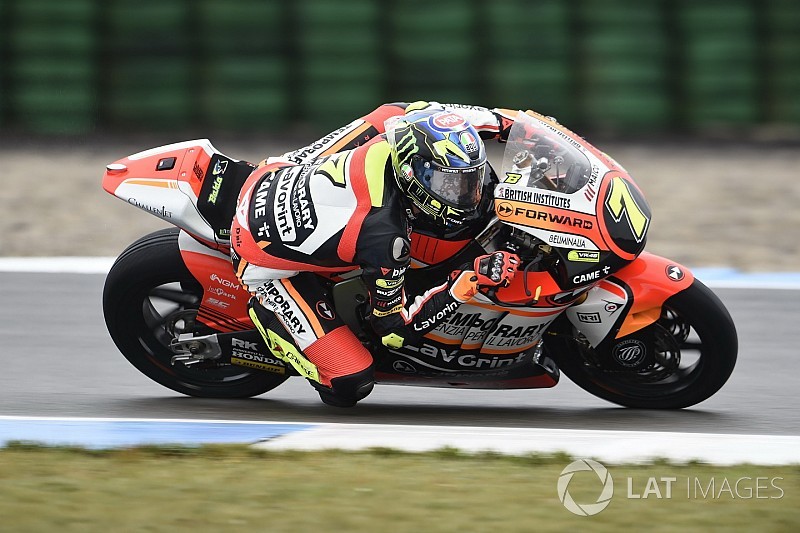 Balddassarri, 20, briefly lost consciousness when he high-sided at the high-speed Ramshoek left-hander on Saturday, bringing out the red flags, and was taken away by ambulance to hospital in nearby Groningen.

There, the Italian rider underwent CT scans was found to have sustained a concussion, which rules him out of action for Sunday's Assen race, but otherwise avoided any other major injuries.

“Lorenzo is now admitted at the emergency room under observation," said Dr Michele Zasa in a statement. "He underwent several CT scans and the results were negative regarding the injury.

"He will still have to undergo an x-ray on his right ankle in order to exclude any fracture. Lorenzo’s vital signs are stable, he is awake, conscious but he doesn’t remember the course of the accident.

"During the next few hours he will be seen by a neurologist and Lorenzo needs to remain under observation overnight. He will be reevaluated tomorrow morning and without any further complications we expect him to be discharged tomorrow.”

Franco Morbidelli, who will step up to MotoGP with Marc VDS next year, took Moto2 pole at Assen by a tenth of a second from Honda protege Takaaki Nakagami, who is also tipped to move up to the premier class next year.

UPDATE: Following further examinations, Baldassarri was diagnosed with a "slight fracture" to his right ankle. The Italian is now awaiting further checks to determine when he can be discharged from hospital.