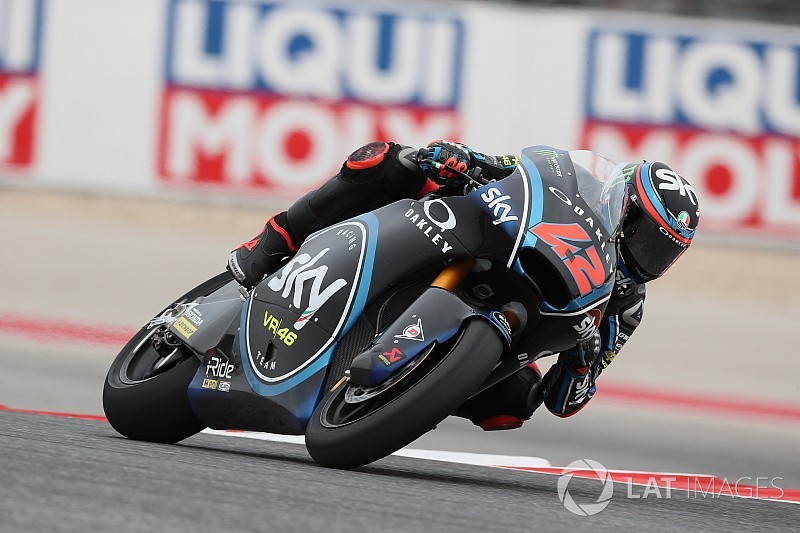 Bagnaia started from fourth place on the grid but passed Sam Lowes off the line and quickly worked his way past Mattia Pasini, as polesitter Marquez opened a one-second advantage.

Bagnaia chipped away at Marquez’s lead and caught his Marc VDS rival mid-distance, shadowing his opponent, and setting up a move into Turn 11.

Marquez immediately re-passed Bagnaia but the Italian fought back a few laps later, battling through the first sequence of corners before prising the lead away into Turn 11, a position he cemented on the brakes into Turn 12.

Marquez briefly countered but was unable to live with the pace set by Bagnaia, who went on to record a comfortable victory, following on from his triumph in Qatar’s season-opener.

Marquez’s pace dropped off across the closing laps, accentuated by a wild moment through Turn 18, though he resisted a resurgent Miguel Oliveira to take second.

Oliveira started from 12th spot but made light work of his opponents, grabbing third mid-distance, though was unable to bridge the four-second deficit to Marquez, in spite of the latter’s late issues.

Joan Mir staged a strong comeback to take fourth spot, having tumbled out of the top 10 on the opening lap following contact with Luca Marini and Dominique Aegerter.

Third and fourth had belonged to Xavi Vierge and Marcel Schrotter, but both crashed out, the former sliding off at Turn 18, moments after losing a couple of spots, while Schrotter suffered a heavy high-side exiting Turn 1.

Schrotter clutched his left shoulder as he clambered to his feet, before heading to the medical centre for further attention.

Iker Lecuona claimed his best-ever result with fifth spot, picking up the pieces for the CGBM Evolution squad after erstwhile front-row starter Lowes crashed through Turn 18.

Brad Binder made similar progress to Red Bull KTM teammate Oliveira to rise from 16th to sixth, as Pasini slipped back to seventh, his prospects underdone by opting for the harder rear tyre.

Jorge Navarro took eighth spot, another rider to make gains from a low-key grid spot, while Aegerter recovered from his Turn 1 clash with Mir to classify ninth.

Lorenzo Baldassarri rounded out the top 10 for the Pons outfit.