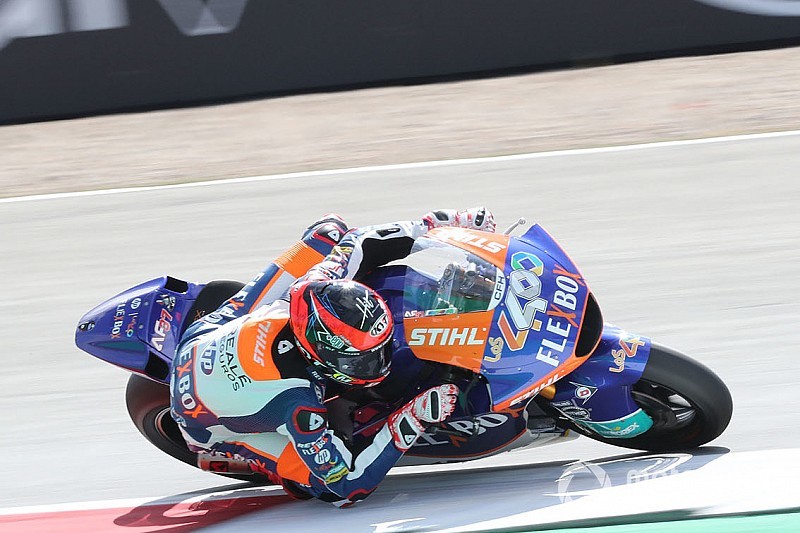 In a frantic Assen race, Fernandez prevailed after an early charge into the podium places as chaos unfolded around him, while fourth-placed Tom Luthi moved into the championship lead as a result of Marquez's crash.

Brad Binder grabbed the holeshot off the line, while poleman Remy Gardner dropped to third behind Xavi Vierge on the sister Marc VDS machine.

Gardner recovered to second on lap two, and quickly scythed Binder's lead - though lost ground on the following tour due to a moment exiting the Strubben Turn 5 hairpin.

Sam Lowes seized the opportunity to move up to fourth, with the Gresini rider moving up to second ahead of Vierge at the final chicane, before overhauling Binder at Turn 4 on the fifth lap.

However, Binder fired his KTM up the inside of Lowes on the run into the Ruskenhoek at Turn 6, and repelled another attack by the Gresini man two laps later at Turn 8.

This opened the door for Augusto Fernandez to charge through to second on the ninth lap, while Gardner dropped out of podium contention with a mistake at Turn 4.

The SAG rider would crash at Turn 16 moments later as he tried to recover, while Lowes's race would end on the following lap when Jorge Martin made slight contact as he came through at Turn 9.

Binder's lead was challenged by Fernandez on lap 14, though the Pons rider was forced to sit up after almost crashing, which allowed Tom Luthi on the Intact bike to come through to second.

Luthi's attempt on Binder's lead was foiled at the last chicane, with the KTM able to move over a second clear as the group behind jostled for second.

Marquez prevailed in that scrap, and immediately cut down Binder's advantage, before taking the lead on lap 20 after teammate Vierge and Italtrans rider Enea Bastianini tangled at Turn 5.

Baldassarri, having started 16th, came through late on to challenge Marquez for the lead, but lost the front going up the inside of Turn 4 and collected the Marc VDS rider.

Fernandez was released into the lead as a result, and led Binder home for a maiden victory, while Luca Marini (Sky VR46) completed the podium despite riding in considerable discomfort from a heavy crash on Saturday.

Fernandez moved up to third in the championship, 25 points behind Luthi.

Luthi finished fourth to take a six-point lead over Marquez in the standings, with Tetsuta Nagashima rounding the top five ahead of Andrea Locatelli (Italtrans) and Stefano Manzi (MV Agusta), who was sent to the back of the grid for a collision in FP1 with Honda Team Asia’s Dimas Ekky Pratama.

Martin crashed heavily out of fourth late on and had to be stretchered off track. His collision with Lowes, as well as the Baldassarri/Marquez clash are under investigation.

Speed Up rider Jorge Navarro also had a fall and retired.