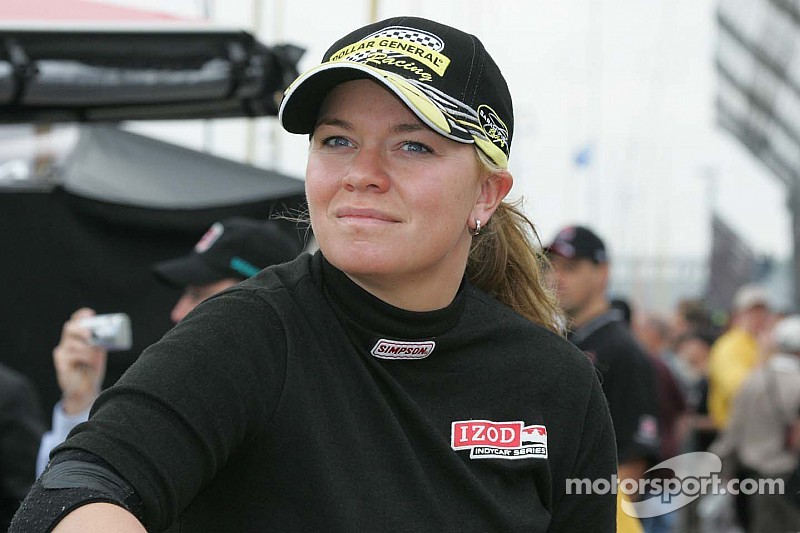 And before you send me the mean emails, read the column.

Yes, as a matter of fact, it is cute that Sarah Fisher plans to race a midget in the 2015 Chili Bowl. I suspect that is exactly what she hopes her competition thinks. Because Sarah Fisher – assuming muscle memory still applies after all these years – can drive the absolute hell out of a midget.

Nearly 20 years ago, during a period when I had nothing to race myself, I signed on as the traveling announcer for Jack and Rose Calabrase’s North American Midget Auto Racing Series. Based in Michigan, NAMARS went as far east as Georgia, as far south as the Kentucky border, and most weekends, I spent far more time driving to the races that at the races themselves.

I was in it for the money, of course: $50 a weekend, no expenses. Had I not had a gasoline credit card from Car and Driver, where I was working at the time, I would have been in the hole a lot more than I was. But I got to see some great racing, got to know some great racers, and announce at tracks all over the Midwest. And, against all odds, I got to be, well, not terrible at it.

Which brings us to Sarah Fisher: The bespectacled teenager began showing up at our races, invariably in the company of her mother, Reba, who looked so much like her that from 100 feet, you had to squint to tell them apart.

Sarah took midget racing seriously. There was another female racer in the field whose name I won’t mention, who was quite talented, but we knew that only one of the two might go on to a professional career, and that was Sarah Fisher. She learned the car, learned the tracks, drove hard and hated to lose.

And while the NAMARS series wasn’t quite USAC, we had our share of hot shoes, meaning Sarah often found herself in the same field as the legendary Mel Kenyon, Jack Hewitt, Dan Drinan, Doug Kalitta (before he went drag racing) and a bunch of other accomplished racers.

Sarah got better and better. She was good in sprint cars on the dirt, amazing in midgets on pavement. After I left NAMARS, I saw her set a track record at Winchester in Indiana, one of the oldest, toughest, roughest paved half-miles in the country.

Let me tell you this: Yes, Sarah had good equipment, but to knock out that record lap at the treacherous Winchester, and I don’t care if you have a jet-powered car, it takes you-know-whats of steel.

Soon, of course, Sarah Fisher sold her equipment (and the guy who bought it never went quite as fast as Sarah had), and went to the Indy Racing League, where she debuted at Texas Motor Speedway in late 1999 in a Derrick Walker car with an engine so tired it was amazing it actually lasted 66 laps before it imploded. Some members of the team were convinced Sarah would crash before the engine failed: They were wrong.

Sarah Fisher never got the ride she deserved, never ran for a team that had the speed and the budget for her to put together an entire season that would reflect the talent she has. At times you could see her confidence waning. I wanted her to moonlight in midgets and sprint cars, and get that confidence back, but it didn’t happen. She spent a couple of years in the Winston West NASCAR series, but never clicked in stock cars, and after a hit-and-miss return to open wheel, eventually driving for her own team.

But it just never happened for Sarah Fisher, and at the end of the 2010 season, she announced she was retiring from driving.

Just after that debut at Texas in 1999, I wrote a story titled, “Can this little girl help save the IRL?” It was the right headline, but the wrong year, the wrong girl – Danica Patrick came along and did just that. Still, Sarah Fisher was voted most popular driver in the series for three straight years, so even though she never got a win in her 83 starts, her career was decidedly a success. And as a team owner, she did get that first win in 2011, and it was deserved.

So now, she will be back in the seat of a midget for the 29th Annual Lucas Oil Chili Bowl in Tulsa, Oklahoma, an event that is fast outgrowing its cult status. She is racing an RW Motorsports car, teaming with brother-in-law Kyle O’Gara and Dave Darland, one of the best short-track open-wheel racers ever. With 324 entries, just making the final feature with 24 cars is a victory in itself.

And if Sarah Fisher makes it, and I hope she does, I would love to see that glint of self-confidence in her eyes I saw nearly two decades ago.

Sarah Fisher getting back behind the wheel