Saldana gets by Clauson, Stenhouse for POWRi midget win 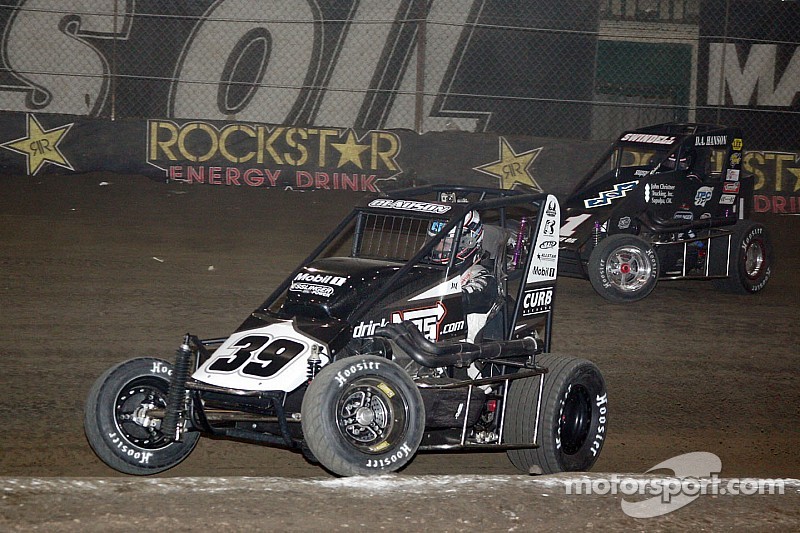 Joey Saldana of Brownsburg, Indiana led the final five laps in the Shannon Saldana-owned Esslinger-powered Spike Chassis, cruising to victory in the non-points event organized by the POWRi Lucas Oil National Midget Series on the 1/6 "Mini-Magic Mile" at the Southern Illinois Center at the Du Quoin State Fair Grounds.

Bryan Clauson of Noblesville, Indiana (in file photo above) started on the outside front row in the Rusty Kunz Racing/Curb-Agajanian, Esslinger-powered Spike Chassis and lurched into the lead at the drop of the green flag with 2013 POWRi Lucas Oil National Midget Series Rookie of the Year, Parker Price-Miller in tow. As Clauson checked out and started working his way towards lap traffic, Andrew Felker's Fontana-powered Boss Chassis would slow entering turn three, while simultaneously Spencer Bayston's Esslinger-powered Spike would slow on the high-side entering turn three, bringing out the caution and momentarily cooling off the Great Clips Battle at the Center presented by K & N Filters.

With 20 laps down, Clauson would lead the field back to green, and after quickly dispatching the lap car in between himself and Clauson, Saldana would attempt to reel in Clauson with no avail. With Clauson comfortably out front, Christopher Bell of Norman, Oklahoma would pick up momentum and reel in Saldana, overtaking the second position on lap 26 and setting his sights on Clauson for the lead.

As Bell's Keith Kunz/Curb-Agajanian Motorsports' Toyota-powered Bullet had closed in on Clauson enough to be positioned to challenge for the lead, 2012 POWRi Lucas Oil National Midget Series Champion Andrew Felker and NASCAR Sprint Cup driver Ricky Stenhouse, Jr. would tangle in turns one and two, collecting Clauson and Bell, bringing out the second caution of the feature. Damage sustained to Bell's machine would be enough to end his bid for the win.

Capitalizing on Clauson and Bell's misfortune, "The Brownsburg Bullet," Joey Saldana would inherit control on lap 35. Also gaining ground from the caution was Dereck King of Vienna, Illinois and Nick Knepper of Belleville, Illinois as both drivers moved into the top three. When Saldana led the field back to green, Clauson would begin the daunting task of working his way back towards the front with 5 laps left. With Saldana out front, Knepper would close on King and start working him over for the second position. As Knepper was positioned to strike, King would loop it entering turns one and two, collecting Knepper, Ryan Criswell, Seth Motsinger, Kevin Ramey and NASCAR Sprint Cup driver Ricky Stenhouse, Jr., bringing out the caution and slowing the action for the final time on lap 37.

With three laps left, it would be a shootout to the finish between Saldana, Justin Peck of Monrovia, Indiana and Bryan Clauson, who worked all the way back up to the third positon. When the field resumed green flag racing, Saldana would take off as Clauson relentlessly put pressure on Peck for second. On lap 39, Bryan Clauson would overtake Peck, but time would run out as Saldana would take the checkers first, followed by Bryan Clauson and Justin Peck. Coming in fourth was 2014 POWRi Lucas Oil National Midget Series Rookie of the Year, Spencer Bayston and rounding out the top five was Daniel Robinson.

"We got so many people that helped us get this car together," explained a victorious Saldana. "It's just the coolest thing to be able to race and stay home with my family for Christmas. I've been gone for like 13 years going to Australia, so I figured I better find another thing to do to stay home and enjoy the parts of life that fade away really fast. I wish my kids could have been here; they would have loved this, but my son had basketball last night and he's got to do what he loves to do and hopefully I can do something that he's proud of. We had a good car. It just goes to show, if you surround yourself with great people, great things can happen. And tonight it was just a blessing, just right place at the right time. I wasn't fast enough to get caught up in what Bryan and Christopher got caught up in, but I was fast enough to win the race, so that's what counts in the end."

"It's a bummer," said second place finisher Bryan Clauson. "You don't get many racecars that dominant. Just wrong place, wrong time, I guess. It was just one of those deals. It was a bummer; you hate to lose big races especially with a dominant car. I guarantee you, they roll this thing off as good as they did this weekend, the Golden Driller is going to have to go through us, not the Swindells.

"I was going to try to wait until the last lap to throw a big slider on Joey if I had gotten close enough, but Bryan snuck in there and made it a little fun," explained third place finisher Justin Peck. "It was a good race, had me scared a couple times, thought we were going to get caught up in a wreck."