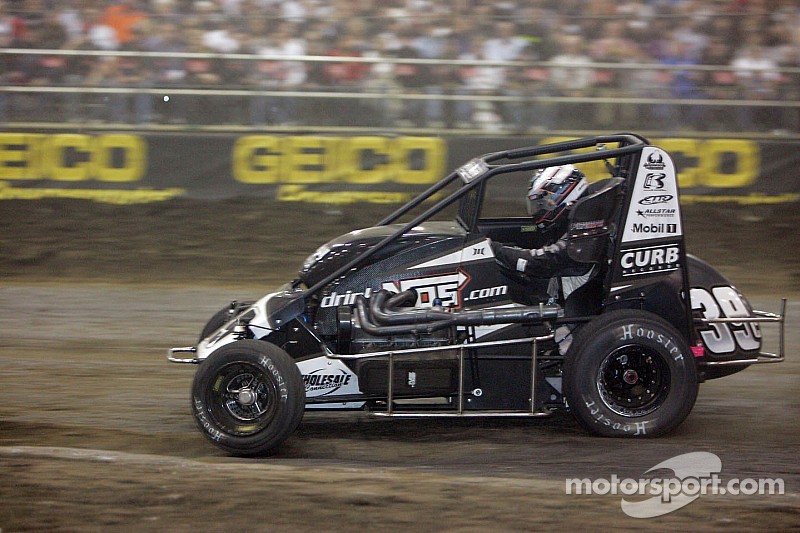 2014 winner will be hard to beat in Saturday feature.

Picking up where he left off in 2014, Bryan Clauson led flag-to-flag in Friday's Vacuworx Global Qualifying Night A-Feature event. The only driver to lead start to finish in a preliminary A-Feature in the 29th annual Lucas Oil Chili Bowl Midget Nationals presented by General Tire, the win is his third career preliminary night victory.

Asked what it would mean to win back-to-back Drillers, Clauson replied, "It would be huge; this place has been under an evil reign for a long time. I got to sit here next to Kevin [Swindell] last year and talk about how easy it is to win off the front row, and this and that. We are on the front row this year, and hopefully it's as easy as he says. Hopefully we can make 55 good ones, and be sitting here again tomorrow."

Working low on the start, Clauson soon jumped to the cushion to begin building his momentum. Racing from eighth, Chad Boat began working Daryn Pittman for third. Making the pass on Lap 7, the pair gave chase as Dave Darland occupied the runner-up spot.

Finding the tail of the field on Lap 12, Clauson began picking his way through slower cars; building a buffer between himself and Darland, who was losing his advantage over Boat and Pittman through traffic. Swapping the third spot on the 18th lap, Boat returned the favor, and then made work of Darland for second on Lap 20 with Pittman in tow. Challenged by Damion Gardner for fourth, Darland and "The Demon" tangled entering the first turn, forcing the race's lone caution on Lap 22.

With seven lapped cars in the lineup, Clauson took the green with no worries of being caught. Racing amongst slower cars, Daryn Pittman managed to work back around Chad Boat for the silver position in the final two laps.

"I hadn't run the bottom in 20 laps so I didn't know what to expect when I went down there," said Pittman of his pass for second. "I was just committed that I was going down there and try to make something happen."

Boat hangs on to make the A

Chad Boat held on to punch the week's final ticket into Saturday's A-Feature.

"You've got to pass everyone you can and our goal was to get up where Bryan was. It probably wasn't realistic, but I think we are all pretty pleased here."

Racing from the night's second B-Feature, Tanner Thorson tore a path from 18th to fourth. California's Darren Hagen rounded out the top-five.

Of the final 78 that made the call for Friday's event, eight ended up adding their name to the Flip Count, which stands at 41. Thankfully all drivers have walked away.

The 29th Lucas Oil Chili Bowl Midget Nationals presented by General Tire concludes on Saturday, January 15, 2015 with the River Spirit Expo Center opening at 7:30 A.M. Hot Laps will begin at 9:45 A.M. with Racing at 10:45 A.M. (CT). Features will start with the "N", going to double features from the "M" through the "B" Features.

Lineups for the Saturday Alphabet will be posted to http://www.chilibowl.com.

Stenhouse happy for Clauson, ready to take on Chili Bowl