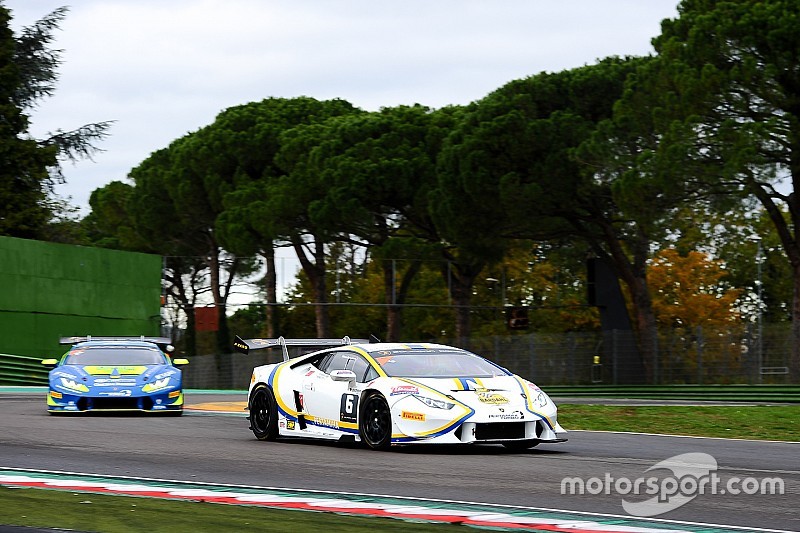 Yuki Nemoto and Raphael Abbate claimed their first Lamborghini Super Trofeo Europe victory at Imola as Loris Spinelli and Mikael Grenier moved to the brink of the title.

Nemoto started the VS Racing entry from second place and could not challenge pole-sitter Vito Postiglione at the rolling start.

But Nemoto attacked around the outside at the Tosa right-hander later in the lap, and although he couldn’t make that move stick, it was the start of a battle that resulted in him taking the lead into Acque Minerali after getting alongside into the Piratella.

Title contender Postiglione was just over a second behind Nemoto when he suffered a right-rear puncture on lap three, heading to the pits and dropping to 31st.

This allowed Spinelli to move up to second place, which he held throughout the first stint despite the interruption of the safety car to clear up the cars of Olivier Jollin and Carlos Sarrea.

Nemoto pitted from the lead at the end of lap 12 to hand over to Abbate, with Spinelli relieved by Mikail Grenier two laps later.

Grenier emerged from the pits a couple of seconds behind Abbate, holding position to the finish just under three seconds ahead when the race was red-flagged with six minutes to go thanks to Mario Cordoni’s crash.

Edoardo Liberati and Nicolas Costa finished third, with the latter passing Richard Antinucci, whose teammate Patrick Kujala had run third before the stops, early in his stint to secure the final podium position.

Antinucci held on to fifth place, just ahead of Sergey Afanasiev, who took over the car started by Harald Schlegelmilch, and Jan Kisiel, sharing with Morgan Haber.

Johnny Cecotto, who took over from Postiglione, came home eighth ahead of the Pro-Am class winning VS entry of Christopher Dreyspring and Liang Jia Tong.

Andrej Lewandoswki and Teodor Myszkowski, already crowned class champions, were the best-placed of the Am entries in 11th place.