Kei Cozzolino and Afiq Yazid took the opening victory in the Lamborghini World Finals race at Vallelunga on Friday morning.

The Clazzio Racing pair took victory in the first Super Trofeo Asia race of the weekend for the one-make Huracán Super Trofeo Evo.

They won by over 13 seconds from James Pull and Jack Bartholomew in their FFF Racing entry. That was despite the leaders picking up a 2.3-second penalty for exceeding the minimum pitstop time when they made their driver swap at half-distance.

The British drivers inherited second right at the end of the 50-minute race when the Huracán of front-row starters Richard Muscat and Ben Gersekowski was forced to pit with a problem, two minutes before the chequered flag.

Muscat slipped to third early on, conceding the place to Pull, but managed to regain second place during the pitstop sequence.

Rounding the final podium position was Artur Janosz and Andrea Amici in second FFF Racing machine. It was an impressive result given their 11th (and last) starting position as a result of an engine problem in qualifying yesterday.

Victory in the Lamborghini Super Trofeo North America race (taking part at the same time) went to Madison Snow and Corey Lewis in their Change Racing-run Huracán. They ran third early on, but took the lead during the pitstop sequence and held on for a comfortable win.

The American duo won by over 10 seconds from a fraught battle between Taylor Proto and Edoardo Piscopo’s US RaceTronics car and the third-placed Jonathan Cecotto/Trent Hindman entry. The latter had been leading from pole position, but fell to third in the pitstops. Late-on the second and third placed cars made contact, but no further action was forthcoming from the stewards.

This is the sixth running of the Lamborghini World Finals where the regional championships of Europe, Asia and North America have their final rounds. 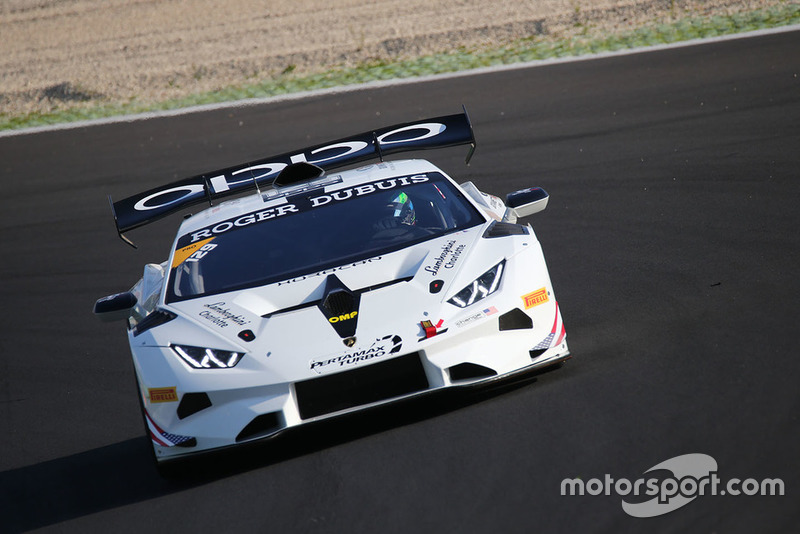