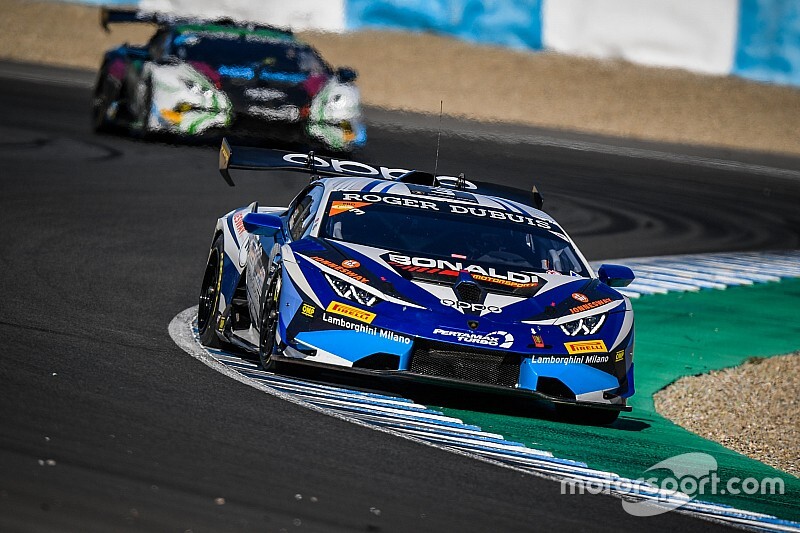 All three regional Lamborghini Super Trofeo titles went down to the wire as the European, North American and Asian seasons reached their conclusion at Jerez.

Change Racing’s Richard Antinucci and Corey Lewis came out on top in a three-way battle for the North American title.

It was once again a disappointing end to the European season for Vito Postiglione, who has now missed out on each of the previous four Super Trofeo titles at the final round.

Kroes and Afanasiev came into the weekend five points ahead of Postiglione and Galbiati but qualified behind the #44 Imperiale Racing Huracan for the opening race.

The #44 had been ahead of Kroes and Afanasiev in the #3 but a left-rear puncture just before the pit window opened extinguished any chances of claiming the title.

Kroes, who had taken over from Afanasiev at the mandatory pit-stop, then kept it clean to trail home former British F4 driver Jack Bartholomew in a Bonaldi one-two to secure the championship.

The North American races were full of action, with Antinucci and Lewis clinching the title with a safe third place behind Precision Performance Motorsport’s Brandon Gdovic – who was partnered by Indycar Series regular Conor Daly.

Antinucci could have sewn up the championship at the previous round at Laguna Seca but was handed a drivethrough penalty for a pitstop infringement.

The same thing happened again in the opening race at Jerez, which the #129 Change Racing Huracan only fourth in class as the #1 Prestige Performance/Wayne Taylor Racing car of Andrea Amici and Sandy Mitchell closed the points deficit with victory.

Amici and Mitchell were due to start race two from pole but the car, with Mitchell aboard, ground to a halt on the installation lap, forcing them to start from the back of the field.

Cedric Sbirrazzuoli and Paolo Ruberti won the race, and crucially denied Gdovic the victory he needed to wrestle the title away from Antinucci and Lewis.

Puhakka, who was beaten to the line by van der Drift’s teammate Evan Chen by just two-tenths of a second in the opening encounter, led until the pit-stops before handing over to Kasai.

The Japanese driver robustly defended an attack from van der Drift exiting Dry Sack but could not prevent the three-time Porsche Carrera Cup Asia champion from getting past as the pair negotiated their way through backmarkers with six minutes remaining.