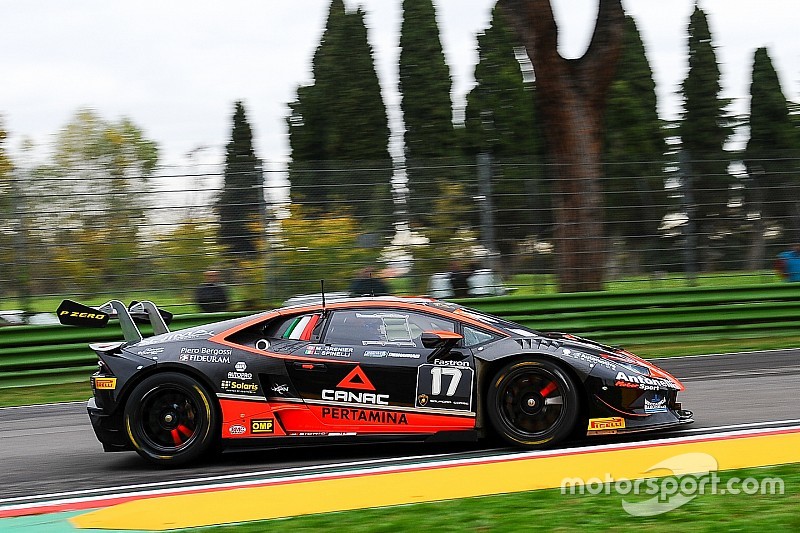 Mikael Grenier and Loris Spinelli clinched the Lamborghini Super Trofeo Europe crown with victory in the season finale at Imola.

Grenier started on pole position and held the lead at the start, but came under increasing pressure from the VS Racing Lamborghini Huracan of Nicolas Costa.

Five laps in, Costa passed Grenier for the lead into Tamburello, but his lead was short lived as he had an off as a result of a problem at Rivazza later in the lap and headed into the pits to retire.

“I don’t know, something broke in the car,” said Costa.

“I don’t think it was anything to do with the kerbs because it was a front tyre or a wheel. I have no idea what happened.”

This gave the lead back to Grenier, who survived a safety car period caused by Miroslav Konopka’s crash that delayed the opening of the pit-stop window.

Gernier retained the lead at the restart and pitted after two laps of green-flag racing to hand over to Spinelli.

When Breukers pitted to hand over to Axcil Jeffries a lap later, Spinelli was able to reclaim the lead as the second-placed car was getting up to speed.

Spinelli held the lead to the finish despite a second safety car period, crossing the line 2.342s ahead of Jefferies.

The result also gave Jefferies and Breukers second in the Pro standings.

The Imperiale Racing entry of Vito Postiglione and Johnny Cecotto, in contention for the title heading into the final round, finished third.

They ran fourth in the closing stages before Postiglione passed Harald Schlegelmilch for the position late on.

As well as Costa’s demise, the crew benefitted from the Race 1 winner Yuki Nemoto beaching his car in the gravel at Tamburello and Patrick Kujala and Richard Antinucci losing time with a long pit-stop.

Christopher Dreyspring and Liang Jia Tong sealed the Pro-Am title with fourth in class in eighth overall thanks to Gianluca Giraudi going off with an apparent puncture after taking over from Kikko Galbiati.