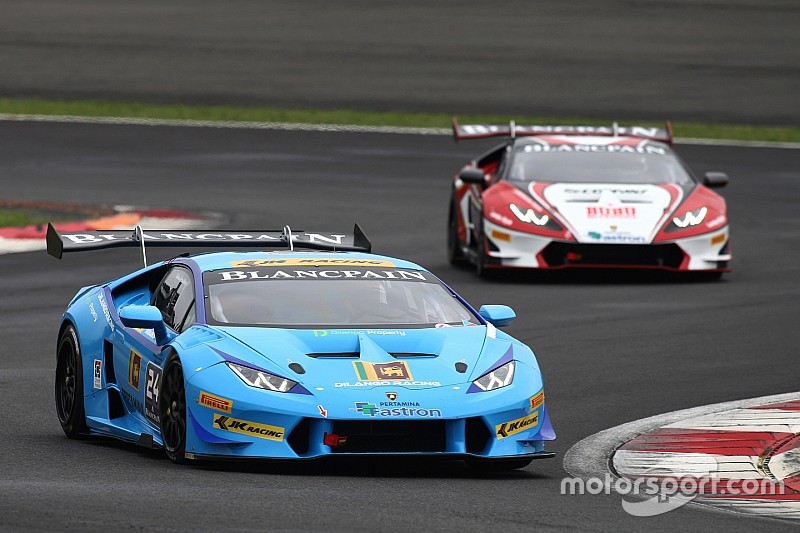 Despite a troubled start to the weekend, Armaan Ebrahim and co-driver Dilantha Malagamuva managed to finish on the podium in the fourth round of the Lamborghini Super Trofeo Asia series at the Sentul International Circuit on Sunday.

Having made a top three appearance at the Kuala Lumpur round last month, expectations were high from the Indo-Sri Lankan duo to eke out another strong performance in Indonesia.

However, such hopes were immediately dashed when Malagamuwa crashed in the first practice session, preventing the two drivers from any meaningful run until qualifying.

Fortunately, a 30 minutes delay to the start of qualifying allowed the mechanics to literally tape the car as they head out for qualifying.

Podium in race one

Starting from ninth on the grid, Ebrahim’s opening stint laid the foundation to a podium finish in race one, with the Indian driver jumping to second place, before handing the duties to Malagamuwa.

The Sri Lankan lost one place due to gearbox gremlins but held on to finish third, completing the podium.

“Coming away with a third placed was definitely a consolation after a disastrous start to the race weekend,” Ebrahim said.

“It was unfortunate that Dilantha [Malagamuwa] lost traction in the first practice session and suffered a big crash which damaged the car badly.

“Missing out on both the practice sessions and most of qualifying meant that I had to go into the race blind. Nevertheless, it was a good race as I had a very good race pace and we were able to come away with a podium position.”

In race two, Ebrahim and Malagamuwa were on course for another podium finish. Ebrahim had piloted the car up to second, having started fifth, and his co-driver was doing just as fine a job when he got behind the wheel.

However, two laps from the chequered flag, disaster struck. The rear tyre of the Lamborghini deflated, forcing the Sri Lankan to drop down the order. He and Ebrahim were eventually classified 11th.

“Race 2 was extremely disappointing as we had done all the hard work and were comfortably placed in second position before Dilantha [Malagamuwa] took over,” Ebrahim said.

“With just two laps to go for the chequered flag, the rear tyre deflated and Dilantha [Malagamuwa] lost track position to finish 11th.”

The next round of the Lamborghini Super Trofeo Asia Series is scheduled between October 17-18 at the Shanghai International Circuit and the Ind-Sri Lankan pair will be eyeing to take back the championship lead.

Podium and a fourth place result for Ebrahim