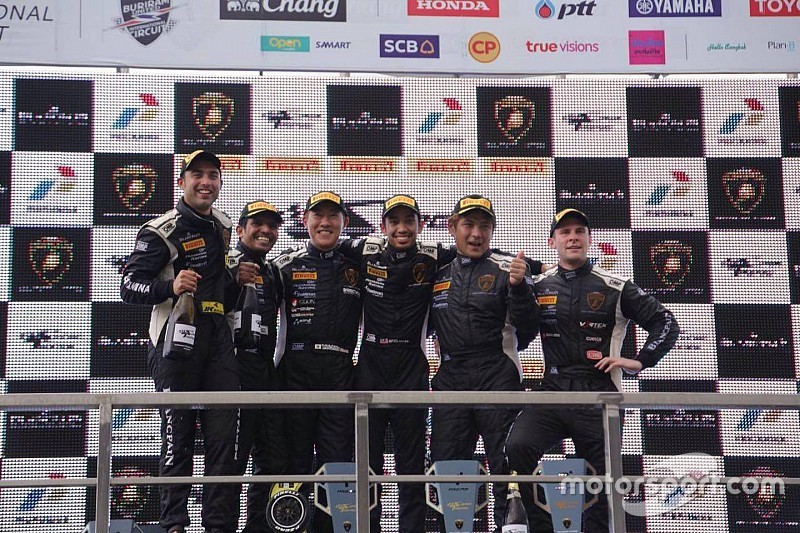 Armaan Ebrahim and Dilantha Malagamuwa continued their podium run in the Lamborghini Super Trofeo Asia Series, notching a double rostrum finish in the third round of the championship in Thailand.

During qualifying for Race 1, Ebrahim qualified his car on the front row of the grid, with Yudai Uchida and New Zealand teammate Jono Lester taking pole position.

In the race on Saturday, the Indian got a better getaway and took lead exiting Turn 1, maintaining a comfortable one second gap once at the front before handing the car to Malagamuwa.

The Sri Lankan, still ailing from food poisoning, was unable to lap at the same pace, the pair lost the lead after a wheel to wheel action.

He, however, managed to hold on to third place to add another podium finish to their tally. Meanwhile, Toshiyuki Ochiai and Afiq Yazid went on to win the race, with Uchida and Lester settling for second.

“We were a bit unfortunate in the first race after I came in when in the lead as Dilantha had not fully recovered from food poisoning that had him on the drips,’’ Ebrahim said.“Considering this, we were happy to finish third."

For the second race on Sunday, Malagamuwa started from sixth and made a rocketing start to move to fourth in the opening stint.

The Sri Lankan then moved into podium position after an opportunistic move, when the driver ahead went wide off the track, before handing the car to Ebrahim.

The Indian, likewise, continued the charge making up another place to eventually finish in a strong second place.

“Once I got in [at the pitstop], I had to drive like [in] qualifying and managed to catch the car in P2 and pass him,’’ he said.

“I started making time on the leader, but the gap was too big and we ran out of time which meant we finished a strong second.”