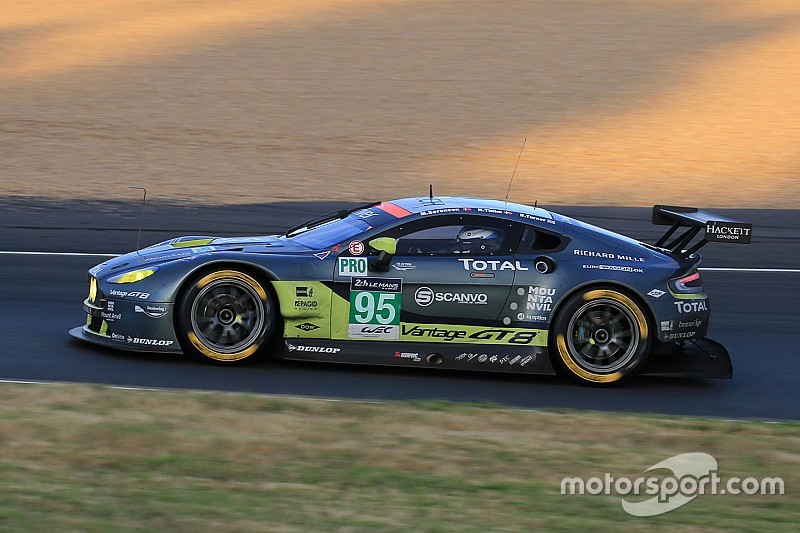 Young Driver AMR experienced an almost trouble free race in it’s fifth participation in the world most important endurance race with it’s quick and reliable Aston Martin. After starting ninth of the GTE Pro grid, the #95 Aston Martin soon moved the order and was in strong fourth place, when the car lost one position due to a puncture caused by debris on the track. Sørensen/Thiim/Turner then brought the Aston Martin to the chequered flag in fifth place and finished one lap behind the class winner.

"The entire team, the drivers, engineers and mechanics did a perfect job", Jan Struve of Young Driver AMR said. "Beside a puncture we had a trouble free over the 24 hours, this does me very proud. The fact that we form such a strong team was the key to claim a fifth place in this race. We didn’t take any unnecessary in the race, as we knew that we couldn’t fight for the victory in terms of outright speed. Beside our great result, we also won the internal Danish championship and beat Jan Magnussens Corvette and Michael Christensen’s Porsche.”

Marco Sørensen: "I’m quite satisfied with the performance of the entire team. My stints were very good and my teammates Nicki und Darren were also very quick. It’s really great to see that we form such a very strong trio. To make to the finish at Le Mans is always something special and with the good amount of points that we scored, Aston Martin took the lead in the manufacturers world championship. We had a clean race but were lacking a bit pace. I hope this issue will be addressed for the next World Championship round at the Nürburgring in about four weeks.“

Nicki Thiim: “If you coming to Le Mans, the goal is always to win your class. This year, we already knew before, that the race would very tough for us, as we are lacking power compared to our competitors. We had to accept this fact. Nevertheless we had a perfect storm and scored good points for the championship. The fact, that didn’t finish on the podium despite our flawless performance showed how competitive Le Mans was this year. We made the best out of it, so eventually I’m satisfied with the result.“

Darren Turner: "Everybody in the team did a perfect job. Nicki and Marco drove a fantastic race and also our strategy was spot on. The start of the race was difficult in severe weather conditions, but we coped with that. The sole problem during the race was a puncture. Unfortunately that happened very early in that lap, so I had to drive a long distance back to the pits at a very slow speed. At the end I’m satisfied wit the fifth position. Aston Martin took the lead in the manufacturers championship and we have a solid base for the second part of the season.”

The next of the FIA World Endurance Championship will take place on 24 July at Nürburgring in Germany.