What happens during scrutineering? 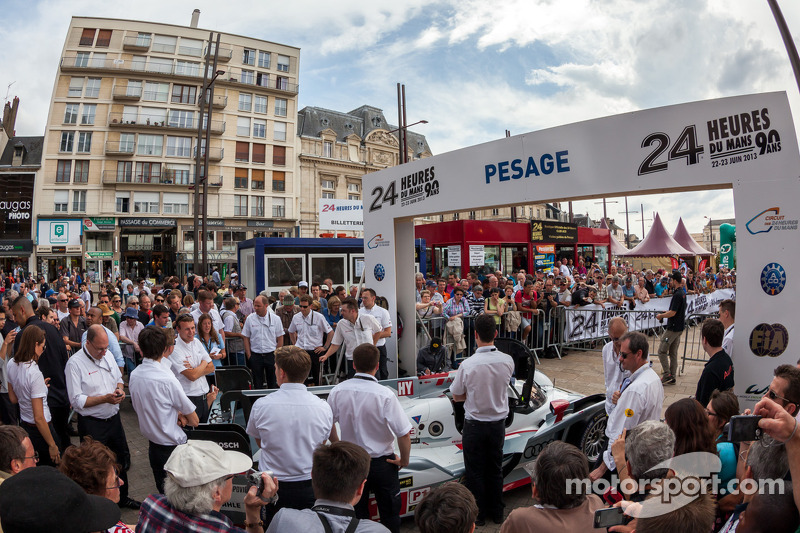 Scrutineering (aka Pesage) for the 24 Hours of Le Mans starts Sunday.

A long week for the competitors which will end seven days later on 15th June at 15h00 when the chequered flag falls at the end of the 82nd edition of the 24 Hours of Le Mans.

As has been the case since 2012, scrutineering and administrative checks will take place at the Place de la République right in the heart of the town. Over one and a half days, 55 cars and the 165 drivers must present themselves one after another to the officials to find out if the cars comply and if the men (and woman) are fit for service!

Scrutineering has three posts. The first is the passage of the car on a horizontal platform equipped with lasers to measure its main dimensions (width, length, overhangs, wheelbase, height of the wing and the fin, dimensions of the holes over the wheels, etc). This platform is also mounted on scales to weigh the cars.

When the car goes through the second post it is placed on a hoist to enable the officials to check the underneath (dimensions of the front and rear diffusers, dimensions and shape of the plank, which guarantees minimum ground clearance and better aerodynamic safety).

At the final one the bodywork is partially removed for the inspection of the safety equipment (extinguishers, belts, circuit breakers, indicators, safety measures for the hybrids’ electrics, etc) the fuel tank and the engine oil recuperation tank. The stickers are also checked here and the timekeepers verify that the transponder is working properly as well as the lights indicating the car’s position in its category. The data acquisition system in each car is scrupulously tested as is the new marshalling system, which tells the drivers in the cars about what’s going on on the circuit and the various actions by the track marshals via a special black box.

This year the LMP1s complying with the new technical regulations will be the object of particularly thorough scrutiny. Checking the engines is no longer the number one priority, that is now to make sure that the new regulations dealing with safety are respected. In all, the various operations last around 50 minutes per car.

While this is going on the drivers in their driver suits go though administrative checks during which their licenses, helmets, driver suits and all their equipment, which must comply with the FIA standards, are inspected. They are also weighed so that their weight can be deducted from that of the car during the checks carried out later on during qualifying. They then have to take part in various communications operations (individual photos, team photos with the cars, press interviews). And also they give autographs to the general public who flock to scrutineering.

The zone has been improved to give the spectators a better view of what’s going on. There is also a mini exhibitors’ village not far from the café terraces on the square, which will make the ambience all the warmer as sunny weather is forecast.

Scrutineering will take place on Sunday from 14h30 to 18h50 when the much-awaited Nissan ZEOD RC will close the day’s proceedings, and it will begin again on Monday 9th June at 10h00 till 17h30.  Topping the bill on Sunday will be the Ligiers, Porsche LMP1s and GTE Pros, the Toyota TS040s.

The other entrants will be checked on Monday. The day’s proceedings will kick off with the two LMP2 SMP Racing Oreca 03R-Nissans and close with the two works Corvette C7Rs. The reigning champion, Audi, is expected at Place de la République at 15h10.