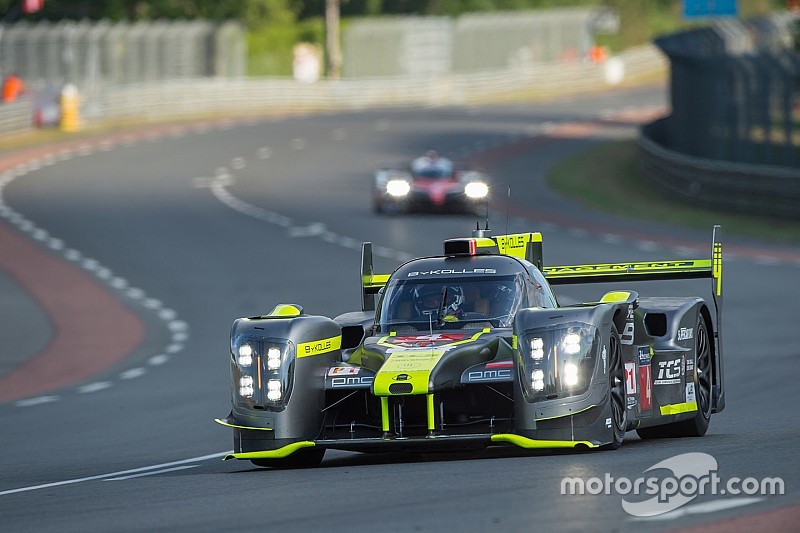 ByKolles driver Oliver Webb says this year's Le Mans 24 Hours was "hard to watch" for him after the team's early retirement, as the scale of the opportunity missed became clear.

Of the five hybrid LMP1 cars entered for the 85th running of the French endurance classic, just two made the finish, and even then only after encountering major reliability issues – allowing an LMP2 car to lead outright for two-and-a-half hours.

The sixth LMP1 car in the field, the #4 ByKolles ENSO CLM P1/01, was the very first retirement of the race, as Webb sustained damage on the opening lap while fighting the hybrids in the opening corners of the race.

Webb had cleared the #9 Toyota TS050 Hybrid to move into fifth when a piece of debris on the track struck the ByKolles machine – breaking its steering and damaging its bodywork, leading to the Nismo engine overheating, the eventual cause of the car's retirement.

"It wasn't a failure on the car, some debris had come up and hit the car, I went wide at Tertre Rouge," Webb explained to Motorsport.com.

"I overtook the [#9] Toyota at the start, got side-by-side with the [#2] Porsche into the Dunlop chicane, but I was just waiting for a nice run onto the Mulsanne straight.

"By our calculations we could have been P1 or P2 heading into the first chicane, with how quick we were in a straight line. But I lost all steering entering Tertre Rouge after a thud on the front, a diveplane or something else not too big.

"I ran wide over the kerbs, which broke the front splitter, which meant I had no front end [grip] at all. I was lucky not to hit the barriers.

"And then all the way down the straight the steering was completely down to the right, and the temperatures went through the roof with no air going into the engine or the radiators.

"Every time went back out the engine was just overheating. And you can't open it up to have a look at it, because now you're banned at Le Mans from touching the engine."

The race was ultimately won by the #2 Porsche 919 Hybrid of Timo Bernhard, Earl Bamber and Brendon Hartley, who recovered from an early spell in the garage to replace a front axle-motor to beat the #38 DC Racing Oreca LMP2 by a lap.

But Webb suggested the ENSO CLM's early race pace meant the ByKolles could have theoretically ended up winning the race overall, had it suffered no further trouble over the remainder of the race.

"If that was the only problem we had all race, we would have been about three laps ahead of the Porsche," he added. "Even when we went out with the engine on lower power, we were doing 3m25s, about seven seconds quicker than the LMP2 race pace.

"It was hard to watch. It was the year for a non-manufacturer hybrid [car] to win, and it could have been a great thing for us. But we have to take the positives.

Stevens starting to “prove himself” with Le Mans Am win