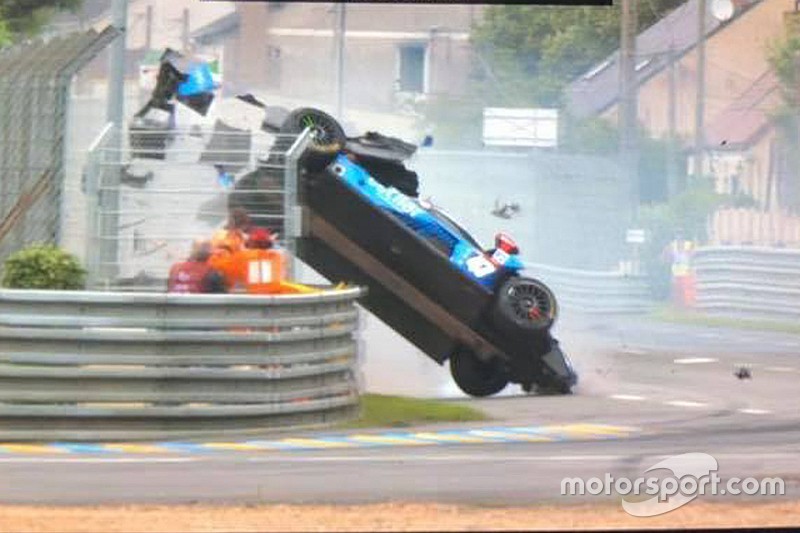 The Villorba Corse LMP2 team is set to be ready to take part in Le Mans 24 Hours warm-up on Saturday after its Dallara chassis survived Giorgio Sernagiotto's airborne crash in qualifying intact.

Sernagiotto suffered a suspected front-right suspension failure approaching the first Mulsanne chicane during second qualifying on Thursday evening, pitching the #47 Dallara P217 into the barriers at high speed and causing heavy damage after it had briefly flown through the air.

However, the tub survived the impact intact, and is set to be reused for the race after the Villorba Corse mechanics stayed up until 3am repairing the car.

The Italian team is awaiting a shipment of fresh bodywork panels from Dallara's base in Italy to be able to complete the rebuild ahead of warm-up on Saturday morning.

"It is a fight against time," said team principal Raimondo Amadio. "We are working in an intense but serene rhythm, helped by the cohesion of a team which proved ready to react even to a situation [we] never previously experienced."

Ex-Formula 1 star Felipe Nasr qualified the #47 car 12th in class prior to Sernagiotto's crash, three seconds off the pace of the LMP2 class-leading IDEC Sport Oreca.

The Brazilian, who drives a Cadillac DPi based on the Dallara chassis with a bespoke aero and powertrain package in the IMSA WeatherTech SportsCar Championship, has voiced his frustration with the limitations placed on Dallara’s LMP2 package.

He believes that the Cadillac’s performances in the US with Action Express and 2017 champions Wayne Taylor Racing demonstrate the Dallara’s potential, but a lack of front downforce for the standard package and limited homologation waivers are holding it back.

“[The Cadillac and Dallara] are totally different, even in terms of driving, but they have similar outcomes in terms of the understeer,” he told Motorsport.com.

“We also have some understeer in the US, but here it’s something that you can’t fix because you end up unbalancing the car and not getting an overall gain.

“You try to cure the understeer but you make the rear worse. I’m sure where the problem is, but it’s just a matter of them and the series, I don’t know.

“It’s clearly limiting the potential of the car, because I know how the car drives in the US and I can win races. I wish we could do the same here.”

Nasr hopes to replicate Villorba Corse's top-seven finish in class from last season, but accepts that the Oreca and Ligier cars are “out of reach.”

“We are struggling especially in the medium-high speed corners, because as soon as we try to bring some speed into the corner, we just don’t have enough front downforce," he said.

“They’ve done their joker already on the front splitter, but it’s clearly not enough. I’m sure people who look after that, they know what’s going on and hopefully they can do something."