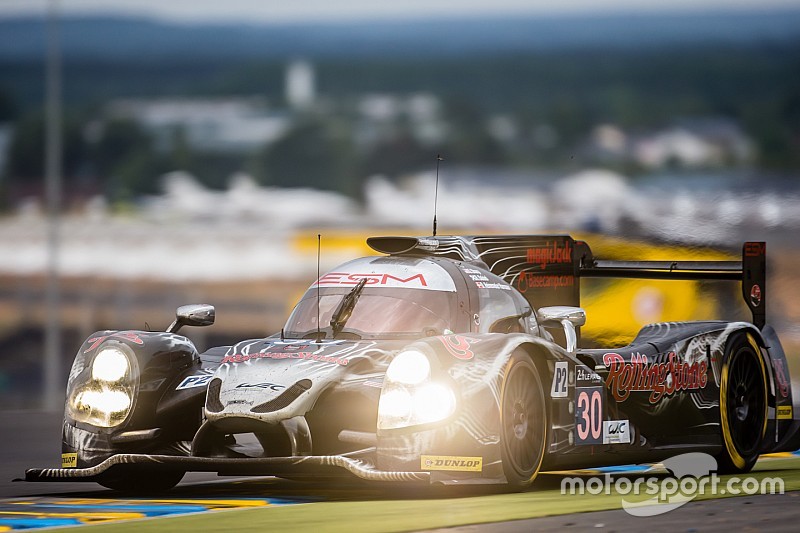 Le Mans, France – Tequila Patrón ESM leaves Le Mans with a victory in its own right – the only two-car American-based LMP2 team finished seventh and 10th at its first attempt at the 24 Hours of Le Mans – the longest and most prestigious sportscar event in the world.

The twice-around-the-clock race provided Tequila Patrón ESM valuable track time with the new chassis and will benefit the team in the upcoming FIA World Endurance Championship (FIA WEC) races. During the 24 Hours of Le Mans, the six drivers completed a total of 641 laps for a combined distance of 5,427.15 miles.

We didn’t have Tequila Patrón on the cars, but the fans knew who we were.

Ed Brown, Johannes van Overbeek and Jon Fogarty, co-drivers of the No. 31 Rolling Stone Ligier JS P2 Honda, finished seventh. The team had a few issues in the first half of the race, but the last 12 hours was a completely different event for the trio.

Knocking on the top-10, the No. 31 team was running 11th in LMP2 at the 12-hour mark. Before sunrise, van Overbeek cracked the top-10 for the first time. Brown, Fogarty and van Overbeek all posted consistent laps and were able to improve position. Ever-changing rain and clear weather proved to be tricky in the closing laps and the decision was made to keep van Overbeek on the Dunlop slick tires to complete the race.

The No. 30 Rolling Stone JS P2 co-drivers Scott Sharp, Ryan Dalziel and David Heinemeier Hansson, finished 10th. The team ran strong in the second half of the event following some eventful on-track occurrences in the first half of the race. Eyeing a top-10 finish with its sister car, the No. 30 team ran strong and was the beneficiary of a few lucky events.

At least three cars ahead of the No. 30 team struggled in the closing hours of the race while Sharp, Dalziel and Heinemeier Hansson ran strong. A brief off-track by Sharp in Tertre Rouge that led to two pit stops for inspection and repairs, so close to earning a top-10 finish in the closing hours of the race. In the end, the team crossed the finish line in 10th place.

A trophy and “Le Mans Champion” title was the goal of the weekend, but the team accomplished far more than walking away with the top spot in class. Competing in and completing the 24 Hours of Le Mans with two Ligier JS P2-Honda prototypes that are less than two months old is a major accomplishment for the Florida-based team.

Next on the schedule for Tequila Patrón ESM is the inaugural 6 Hours of Nürburgring in Germany on August 28-30.

Ed Brown: “It was a good day; it was worth the fight. You hate as a driver or crew member to fight all day to have a good outcome. This was our first time; we learned a lot the whole week. For the No. 31 to get seventh, we were a little surprised, especially when you look at what we had on Saturday between my first stint and not having the right tires on the car. Then Jon had some problems in the middle of the night. The crew really fought through the day, worked hard and we had a clean race. To finish a 24-hour race is a great thing to do. To get two top-10s, that is even better.

“We didn’t have Tequila Patrón on the cars, but the fans knew who we were. Hopefully, next year we the will be able to run our black and Patrón green colors. Rolling Stone was a great partner to have here, hopefully they enjoyed the weekend and seeing the logo on the cars.”

Johannes Van Overbeek: “I was thinking on the in-lap with all the people out there that this was my fifth Le Mans. Just to be able to do this race five times is an honor. Finishing four of the five races is a huge accomplishment. The team did a great job. We had a rocky road getting to this point but the fact that both the Patrón cars finished is amazing. Thanks to Rolling Stone for helping us out this weekend. I’m happy for the crew; they’ve been working really hard and have been away from home for a long time. This hasn’t been easy on anyone. It is nice to get two top-10 finishes today.

“The toughest stint was the last one because you are thinking about what is going to break and especially today, it started to rain and we didn’t have anything to gain but a lot to lose, so we were just cruising around trying to make it to the finish. Night time at Le Mans is very special. Jon and I tripled through the night and it was a great experience driving through the night. The Ligier is physically demanding from a lateral load perspective but easier to drive than a GT car and in other ways it was harder. I don’t think we had the best setup; we were lacking pace this weekend. It was good to drive, get more seat time in the car. I’m looking forward to Nurburgring.”

Jon Fogarty: “We were just trying to race as clean as possible. It looked like everybody had their share of issues this weekend, and we had a handful fewer issues than some of the other teams. We drove our own race. Johannes and Ed both had a great race and we finished in the top-10. It was a great effort by the whole team. Congratulations to all of Tequila Patrón ESM on two top-10 finishes at Le Mans. We wanted more than that by we overcame adversity and completed our task at hand and that was to finish Le Mans.”

“My comfort level with the Ligier JS P2 and at Le Mans has definitely improved. It is amazing because a full stint is only 10 laps. In eight miles of track, there is a lot to learn. It has been difficult; the car wasn’t exactly where we wanted. It wasn’t super-comfortable, so you are fighting the machine a little bit. When we come back here again, it will be a mass improvement from this year.”

Scott Sharp: “There has been so much effort that has gone into getting here and preparing for Le Mans. The guys have had a tumultuous start to the season. Then we finally settled in with the Ligiers and preparing them for this race. It is hard to not be a little bit bummed that so many weird circumstances happened to us during the race. Once you start losing laps, a little here and a little there from isolated incidents, those are laps you never get back.

“It was great for both cars to be able to finish, that’s huge. It is so hard to finish a 24-hour race, as well as everything being so new to us, and we did with both of our race cars! That should give us a lot of confidence in the reliability of the car for the rest of the year. We learned a lot.

“Anything and everything seemed to be thrown at me at this race – more than I expected. In my last stint, the guys called on the radio at the start of the lap and asked if the tires seemed okay. They had seemed all right to me, so I went through the Dunlop Chicane and into the Dunlop Curves and everything was fine. Then I turned on Tertre Rouge, which is fourth gear and a small lift. The minute I turned the car in, all the weight loaded on the left rear, it was just gone. It snapped on me and I was very fortunate there was a big sand trip and I went sliding into it all the way through to the tire wall. Ligier said they built a tank in a car and they sure did because I drove back thinking everything on it must be bent or broken. We put new tires on and went. It was a little scary at the moment but everything worked out okay.

“I can’t thank everyone enough – all the drivers and crew. It has been a long road the last three or four months but I feel like we are finally starting to know what we need and are moving forward.”

Ryan Dalziel: “We wanted to make sure both cars finished and we did. This is a huge achievement for the team, the first time here to have two cars finish with really no problems. On the No. 30 we had the broken weld in the oil tank, something out of our control. The guys fixed it and we were on our way. We learned a lot. I think we’ll be back next year and have a solid shot at winning this thing. It is good to take the checkered flag. It was one of the most incredible atmospheres once you take the checkered flag here and get to go single file through all the marshals and thank everyone for being here.

“This is massive for the team. Victory for us was finishing and anything above that was a bonus. To have both cars finish in the top 10, with fast cars in the race, no mistakes from the crew and no penalties, I don’t think we could ask for more with the task we had ahead of us. I’m looking forward to Nurburgring now. I think we will surprise a few people once we get there and get some miles under our belts with these Ligiers. It was great to be at Le Mans, thanks to everyone at Tequila Patrón ESM.”

David Heinemeier Hansson: “It threatened to rain severely in Tertre Rouge and a bunch of place at the track, just never at the same time. It was sprinkle, get slick and the windscreen full of rain drops, which I’m thankful for because I was on Dunlop slicks. We had a consistent pace, it wasn’t fast enough, but was consistent. We made it to the end and that is a huge accomplishment for the team. Of course we would have liked to win, but since this was the first Le Mans for the team, finishing is good and both cars in top-10 is even better.

“We could have finished higher, maybe top-five, had we not had those issues earlier in the race. It was a good race for the team.”