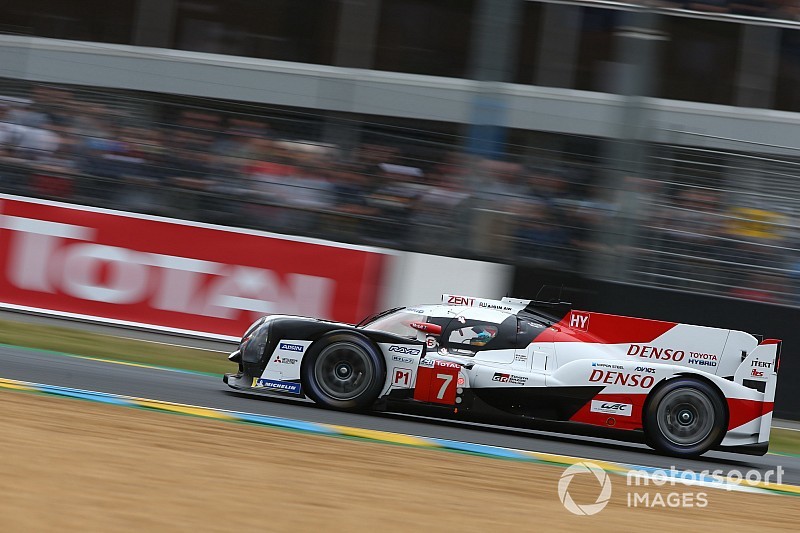 Toyota believes it “did the right thing” by not swapping its two cars around after a dramatic final hour of the Le Mans 24 Hours cost the #7 TS050 Hybrid a near-certain win.

The #7 crew virtually led all race until Lopez caught a puncture with just over an hour left to run. Due to a sensor issue the team mistakenly changed the right-front tyre when it was actually the left-rear that needed changing.

That meant Lopez had to nurse the car home for another lap of the 13.626km circuit and make another pitstop - affording Nakajima, who had been over two minutes off the lead, the chance to take the lead and bring the car home for a second Le Mans win.

“It’s very difficult,” a visibly emotional Leupen told Motorsport.com after the finish. “We wanted to make it really boring, but that didn’t happen.

"The #7 car was by far the fastest of the two, they all worked very hard.

"We got into a situation where we caught a puncture at the end, and it hurts a lot that the team didn’t respond well to that.”

"We thought about doing something [about the running order], but that wouldn’t have been correct,” he explained.

"We talked it through with the drivers and I think we did the right thing. Le Mans chooses its winner again.”

Toyota will face a tough debrief on the #7 car’s side after not electing to change all four tyres when Lopez came in with a puncture.

"The simple question was asked why we didn’t change all four tyres to be safe," said Leupen. "We didn’t do that. It’s all in the game and then you have to make a decision.

"I don’t know what happened [with the sensor]. I don’t think we’re really thinking about that right now. I think the people of the #7 car have a lot of problems with this and we first have to accept it."