Toyota led at the four-hour mark of the Le Mans 24 Hours with both of its cars running in close formation, as the Japanese marque's Hypercar class rivals, Alpine and Glickenhaus, hit trouble.

The #709 Glickenhaus 007 LMH was the first of the five cars entered in the top category at La Sarthe to take an unscheduled visit to the garage late in the second hour.

Three minutes were lost as the team fixed a faulty sensor in an apparent repeat of the issue that resulted in Franck Mailleux spinning at Mulsanne corner in the morning warm-up session.

“We detected a bad sensor," said team owner Jim Glickenhaus. "With the world [supply chain] situation today we’re getting a lot of funky electronics. And just to be on the safe side we brought the car in to change the sensor and everything is fine."

In the fourth hour, Alpine's solo A480-Gibson was hit with a drive-through penalty, the result of Nicolas Lapierre speeding in a slow zone, before the car likewise went into the garage just shy of the four-hour mark with a suspected clutch issue.

That left the #708 Glickenhaus as Toyota's only rival not to have hit trouble so far, but the car started by Olivier Pla and then taken over by Romain Dumas was powerless to offer any challenge to the Toyotas.

Late in the fourth hour, the leading #7 Toyota GR010 Hybrid of Jose Maria Lopez (who had taken over from Mike Conway) suffered an off at the second chicane along the Mulsanne straight on an out lap, squandering a lead of 18 seconds over the #8 Toyota of Brendon Hartley in the process.

Hartley and Lopez ran nose to tail, and after four hours it was Hartley - who had replaced Sebastien Buemi at the wheel of the #8 car - with a slender advantage of around half a second.

Dumas was running 1m11s down in third, with the #709 Glickenhaus of Richard Westbrook 2m38s back.

In LMP2, the #38 JOTA Oreca 07-Gibson stretched its legs at the head of the field as Will Stevens continued the good work of teammate Antonio Felix da Costa.

A lead that had stood at more than 30 seconds over the second-placed #5 Penske Oreca, started by Felipe Nasr and then taken over by Dane Cameron, swelled to over a minute thanks to a well-timed slow zone.

With Penske losing ground by changing back to Nasr at the most recent round of stops, it was a JOTA 1-2 just after the four-hour mark, with Ed Jones running a little over two minutes behind Stevens.

Team WRT's #32 entry - the only one of its three-car attack not delayed by the first-corner incident involving the #31 and #41 cars - ran third with Dries Vanthoor driving, while Charles Milesi made good progress after taking over the #1 Richard Mille Oreca from Sebastien Ogier to run fourth ahead of the Penske machine. 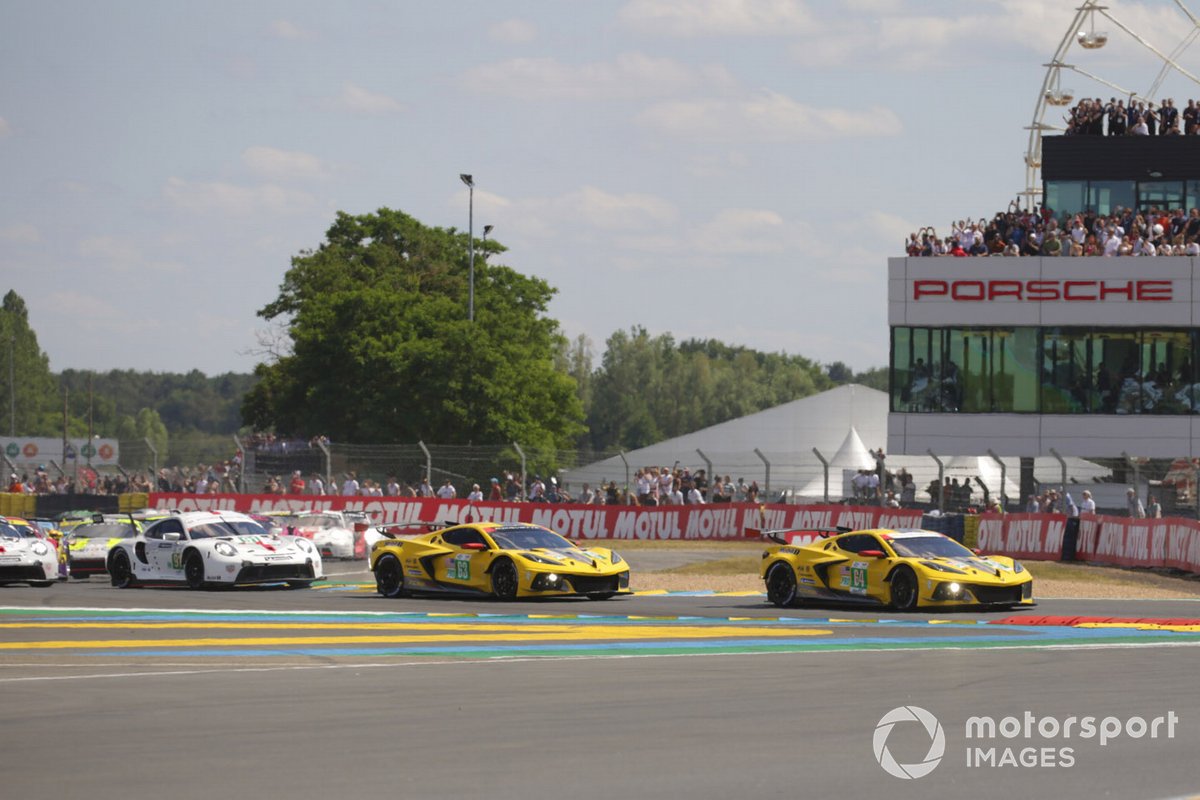 Corvette in control in GTE Pro

Corvette Racing maintained the lead in GTE Pro, with Nicky Catsburg having taken over at the wheel of the class-leading #63 C8.R late in the fourth hour and enjoying a lead of 31 seconds.

Porsche's pair of factory 911 RSR-19s ran second and third, with the #91 car of Richard Lietz and the #92 of Laurens Vanthoor having both passed the struggling #64 Corvette, which had been experiencing downshift issues but still ran fourth in the hands of Alexander Sims.

Occupying fifth and sixth in class were the two AF Corse-run works Ferrari 488 GTE Evos, with the #52 car having moved ahead of the #51 following a drive-through penalty for the latter for exceeding track limits.

Porsche maintained its stranglehold in GTE Am with the #79 WeatherTech Racing car of bronze-rated Thomas Merrill having opened up a comfortable lead of two minutes from the #77 Dempsey-Proton car of Christian Ried.

The NorthWest AMR Aston Martin Vantage of Paul Dalla Lana was best of the non-Porsches in third ahead of the #33 TF Sport machine of Henrique Chaves.