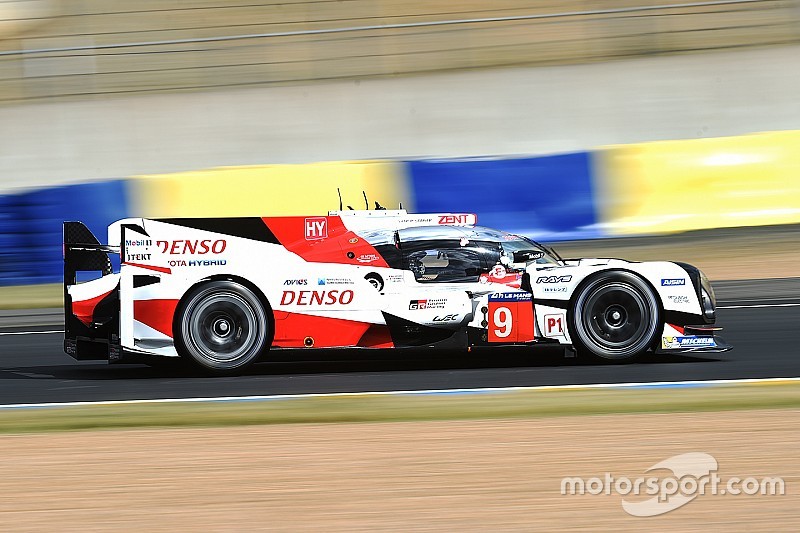 Toyota Gazoo Racing will revisit the scene of its most dramatic moment later this month for the 85th edition of the Le Mans 24 Hours, the third round of the 2017 FIA World Endurance Championship (WEC).

As World Championship leaders, the team travels to Le Mans inspired by the heartbreak of last year’s Le Mans when victory slipped away on the penultimate lap and the overwhelming reaction of fans worldwide.

Since then, Toyota Gazoo Racing has focused on intensively developing the TS050 HYBRID with the aim of winning Le Mans for the first time. Toyota made its Le Mans debut in 1985 and has entered 18 times, finishing second on five occasions.

The determined development effort in Higashi-Fuji and Cologne has resulted in a significantly revised TS050 HYBRID, which is so far undefeated following wins at Silverstone and Spa-Francorchamps.

A new 2.4litre V6 turbo-charged petrol engine, with optimised thermal efficiency, made its race debut at Silverstone, as did an upgraded hybrid system, with lighter and smaller motor generator units, which recover and deploy 8MJ per lap at Le Mans.

Le Mans will see all three TS050 HYBRIDs competing in low-downforce specification, which puts a priority on top speed which is a critical aspect of performance at the 13.629km Circuit de la Sarthe.

Leaving no stone unturned as part of its philosophy of continuous improvement, the team has also revised its driver line-up for Le Mans to optimize its competitive level.

Sébastien Buemi, Anthony Davidson and 2014 pole position-winner Kazuki Nakajima race together at Le Mans for the third time, in the #8 TS050 HYBRID. They were not classified last year following a technical problem on the penultimate lap when leading.

Nicolas Lapierre, a podium finisher for Toyota in 2014, joins Le Mans rookies Yuji Kunimoto and José María López in the #9 TS050 HYBRID. This year is the first time that three Toyotas have competed at Le Mans since 1999.

Preparations intensified earlier this month when all cars took part in the official test day, the only chance for competitors to test at La Sarthe outside of race week. The team was satisfied with productive test, which saw the three TS050 HYBRIDs lock-out the top three positions.

Le Mans truly represents the spirit of endurance racing, featuring a total of nearly 35 hours of driving, starting on Wednesday 14 June with a four-hour practice session at 16.00 before two hours of qualifying starts at 22.00.

Qualifying continues on Thursday with another pair of two-hour sessions (19.00 & 22.00). The starting grid is decided by the fastest single lap from any of the qualifying sessions, with Toyota ready to fight for its third pole position.

Friday’s drivers’ parade in the city centre gives fans a unique chance to meet the drivers before race weekend, which begins with a 45-minute warm-up at 09.00. The race starts at 15.00 on Saturday.

Toshio Sato, Team President: “Le Mans is the highlight of our season and the focus of a huge team effort in Higashi-Fuji and Cologne. I would like to thank everyone for their sacrifices and hard work over the last months to prepare for this race. We all remember what happened last year but that is in the past; now we are focused only on this year’s race and we expect to fight at the front again. After winning the first two races of the 2017 season we are hopeful, however we know Porsche will fight back strongly and we must perform at our best to be competitive. The test day went very well for us but we are not getting carried away because the only important result is at the end of 24 hours of racing. I expect a very close race, which would be fantastic for the fans; we cannot wait to be part of it.”

Mike Conway (TS050 HYBRID #7): “At the test we saw what we can do in nice conditions but as the Le Mans week evolves you experience different conditions, then of course the race is another story. Le Mans is a great event and it’s the one we look forward to for a year. When you get on track on Wednesday everything gets more tense and the atmosphere grows. Then when you drive at night you have to adapt to how the car behaves in those conditions. It’s exciting to be part of it.”

Kamui Kobayashi (TS050 HYBRID #7): “This is a big race for us and we are all fully motivated. Our preparations have gone well so I’m definitely looking forward to the race week. I think there is a big opportunity for us this year and we need to make sure everything runs smoothly and we prepare in the right way. It is an unbelievably long race which requires the best preparation. After last year, everyone in the team is pushing hard and we will be ready for the challenge.”

Stéphane Sarrazin (TS050 HYBRID #7): “Le Mans is just an amazing race on a very special circuit. For a French driver to compete at Le Mans, with all its history, is a magical experience. We have been working all year to be ready for this and I am looking forward to driving with Mike and Kamui again. We came close to winning last year, so the target is definitely to stand on the top step of the podium this time. The car looks strong so we have a chance, but we know Le Mans is a very tough race.”

Sébastien Buemi (TS050 HYBRID #8): “We go to Le Mans this year after a really positive test and two race wins, so the preparation has been great so far. I was impressed with how the cars ran at the test, but that doesn’t count for anything now. We have to get everything right which means we will be working hard during the whole week. Le Mans is always a special moment in the season and it always creates strong emotions. This year I hope they are happy emotions!”

Anthony Davidson (TS050 HYBRID #8): “I am really geared up for Le Mans this year and I have a positive feeling going into race week. The big challenge of Le Mans is that so many things can, and will, change during the race. We experienced this a few times and it’s what makes the race so special; you never know what’s going to happen. No-one can be confident because this race is so tough. But our preparations have started really well so I’m feeling good and looking forward to it.”

Kazuki Nakajima (TS050 HYBRID #8): “Le Mans is a great circuit and an impressive event; I very much enjoy it. We have won the first two WEC races of the season but Le Mans is a different story, as we know very well. It is incredibly hard to win this race because you need speed, reliability and a bit of luck. Our car is quick as you could see from the test day, we have prepared well and everyone in the team is pushing like crazy to win Le Mans.”

Nicolas Lapierre (TS050 HYBRID #9): “From the first lap of test day you realise what this race means, and why we are working all year for this. It is a very special track with a very special atmosphere. You can feel right away that the TS050 HYBRID is made for Le Mans so it is exciting. During the test, the car looked very competitive which is a great start but we have plenty of work to do. Personally I am really happy to be back in an LMP1 car at Le Mans; the hybrid system just feels amazing.”

Yuji Kunimoto (TS050 HYBRID #9): “I cannot wait to experience Le Mans race week for the first time as a driver. Actually, my older brother Keisuke already raced there in 2009 so I know how impressive this event is. When I drove the circuit for the first time at the test, I understood immediately that it is a special circuit and one which I like a lot. There is a lot to learn and work on before the race but I am looking forward to being part of it.”

José María López (TS050 HYBRID #9): “It was my dream to race at Le Mans so I think the race itself will be impressive, with the fans, the speed and the atmosphere. For me, race week is all about preparing and taking everything step by step; it’s a long week until the race itself. The challenge of Le Mans is not only about lap times; we have to be consistent, good in the traffic and get to the flag without problems. I think we have a strong car so we need to keep up the pace.”