Toyota driver Sebastien Buemi admits he feared "everything was lost" for the #8 crew that ultimately came through for a third consecutive Le Mans 24 Hours victory following the car's early troubles. 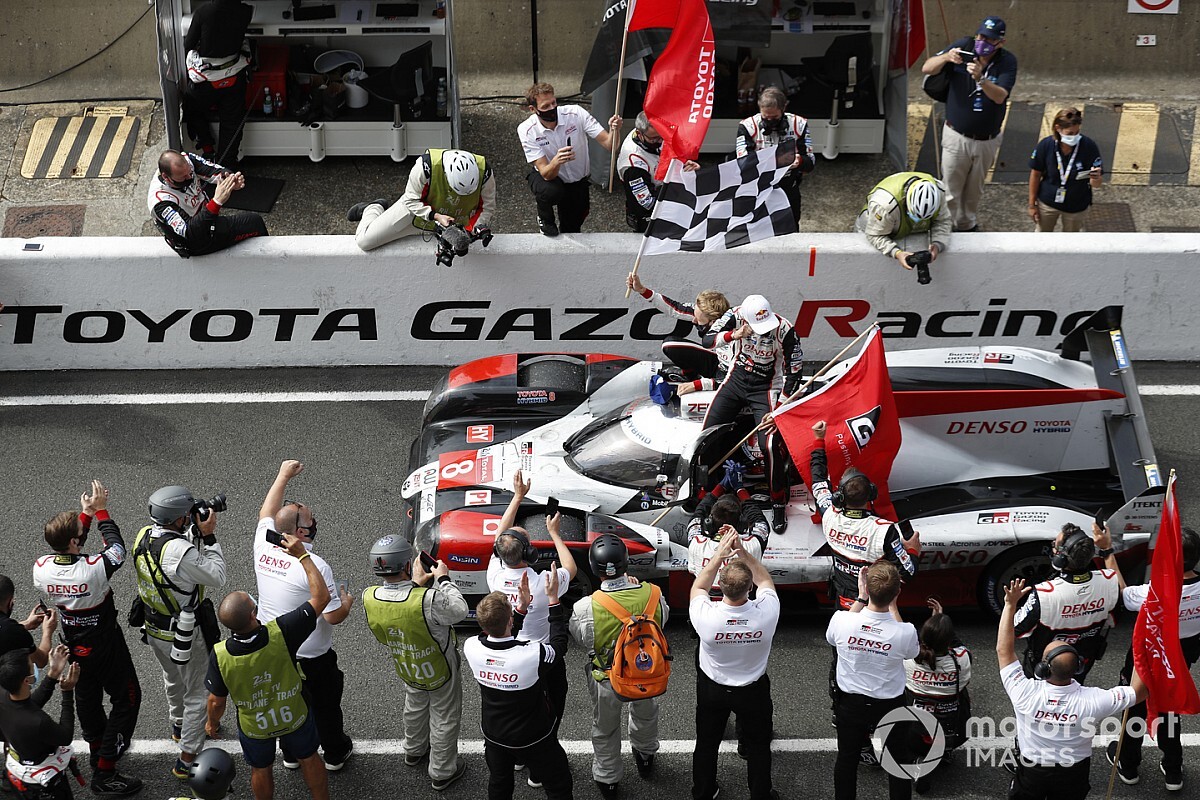 Buemi, Kazuki Nakajima and Brendon Hartley clinched victory in the TS050 Hybrid's swansong race in the 88th running of the French endurance classic, also giving the Japanese manufacturer a hat-trick of wins.

It was a victory that looked unlikely when Toyota brought the #8 car in for a front-right brake change towards the end of the sixth hour of the race, which gave the sister #7 car of Kamui Kobayashi, Mike Conway and Kamui Kobayashi an advantage of a lap.

However, the pendulum swung back in favour of the #8 crew when the #7 car was forced to come in to have its right-hand side turbo replaced, costing it half an hour.

From there, Buemi, Nakajima and Hartley enjoyed a relatively untroubled run to the flag, their margin increasing when both Rebellions hit trouble in the second half of the race.

"When you look at the race, just after the start we had the puncture, we had the slow zone not going our way, then the brake issue," Buemi told Eurosport. "All of a sudden you feel like everything is lost. But at Le Mans it’s never the case.

"With what happened to the sister car and the Rebellions, in the end we were there. It’s an incredible feeling, I’m so happy we made it."

On Toyota's third win in a row, he added: "It’s amazing. We get to keep the big trophy now, when you win three times. That was the main target."

Nakajima brought the #8 car over the line for its third win in a row, giving himself and Buemi a third successive win and team newcomer Hartley a second.

"Just incredible," said the Japanese driver. "What luck we had. First of all I’m very happy for the team that at least one of us won the race, that’s something we had to make sure of.

"We started with a lot of problems in the beginning of the race, and car 7 had a later, bigger issue than us, but what we did in the car, and also the car was very good in the race. So I think I’m quite happy with what we’ve done, happy for the team."

Hartley added: "It's still sinking in. We miss the fans, it doesn’t feel the same. But the hard work that has been put in behind the scenes here, this result, and with my two teammates, to win it with two different manufacturers feels amazing."

Toyota "back on track" with hypercar test plan