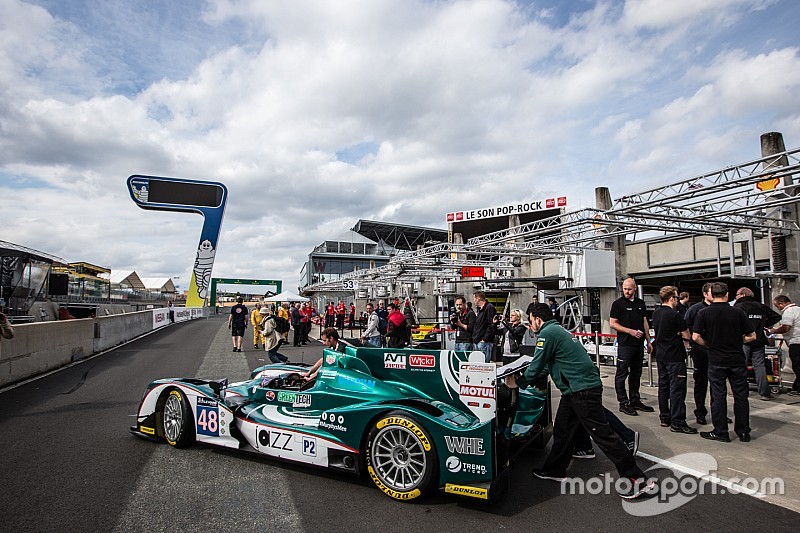 Five cars are included in the entry list for the 83rd edition of the 24 Hours of Le Mans.

Two weeks after the 1-2 finish at the 4 Hours of Imola in the European Le Mans Series, seven ORECA chassis took part in the 24 Hours of Le Mans Test Day. Five cars are included in the entry list for the 83rd edition of the race (June 13-14). While the ORECA 03R made its debut at La Sarthe 12 months ago, the new ORECA 05 LM P2 was making its first laps around the legendary Le Mans circuit on Sunday. This test session proved to be positive, both in the balance of the cars as well as pure performance.

The ORECA 05 LM P2 is still growing up. Following a first test in early March, the car’s debut race was in April and first victory in mid-May. And now the latest creation from the Signes workshops has discovered the 24 Hours of Le Mans circuit. Although the weather was variable in this tradition day of testing, the hours of track time helped the teams – Thiriet by TDS Racing and KCMG – to start working on refinements. The first impressions were positive for both teams running the Le Mans package for the first time.

The day allowed us to define a good base setup, and now we’ll just have to focus on a few points ahead of the race.

Following the morning session, KCMG had the third quickest time in LM P2. And after the second session, Thiriet by TDS Racing was second.

" We didn’t test much on a dry surface, so the weather today didn’t make things easier to work, but the handling of the car is good. " declared Nicolas Lapierre (ORECA 05/KCMG.) " The day allowed us to define a good base setup, and now we’ll just have to focus on a few points ahead of the race. The Le Mans aero kit brought what we were expecting, with a good top speed while maintaining good downforce. The balance is good. In wet conditions we had good performance, as well as on a dry/wet surface. In the dry, it’s a bit harder to be affirmative but these tests have confirmed everything we’ve seen so far from the ORECA 05. "

"These tests went quite well. I was lucky enough to be one of the drivers to run in the dry." explains Pierre Thiriet (ORECA 05/Thiriet by TDS Racing). " We did several tests on the aero package and the team will analyse it all before the race week. The weather complicated things, and we worked with the aim to avoid all mistakes. But it was good to get a little experience, including in the rain. In all weather conditions, the car’s handling is good. The track will evolve a lot from now and we’ll have to change our settings accordingly. The base level to work from is good and the feeling is nice."

Alongside the two closed prototypes, five other ORECA chassis were on track. Three willl be at the start of the 24 Hours of Le Mans in June – the Alpine 450b of Signatech-Alpine, developed and built by ORECA Technology, as well as the No. 18 ORECA 03R of Murphy Prototypes and No. 45 ORECA 03R of Ibanez Racing – while the other two have been placed on the reserve list – the No. 44 ORECA 03R of Ibanez Racing and No. 49 of KCMG. Now a veteran of the Sarthe with four podium finishes, two poles and three fastest race laps in four years, the open prototype is still in its element. This was confirmed by the second fastest time posted by Signatech-Alpine in the morning session, and the fastest LM P2 time for Murphy Prototypes in the afternoon.

" We are happy with this Test Day " underlines Greg Murphy, Team Principal Murphy Prototypes. " We ran the fastest time in the afternoon session and the third quickest on the day. We can’t say that it’s a surprise, but this confirms that the ORECA 03R is on pace. Nathanaël (Berthon) and Karun (Chandhok) are close, and Mark (Patterson) took advantage of the day to rack up the miles. We were also able to validate a few settings with the Dunlop tires. It was interesting to run in the wet and in changing conditions. Overall it’s positive. "

Designed and built by ORECA Technology, the two Rebellion R-One LM P1 entries were making their official debut with a new powerplant. Following intense work over the course of these last months to install the V6 AER bi-turbo, the performance of the cars in the Test Day were hopeful.