As the minutes ticked down on the 2020 edition of the Le Mans 24 Hours, the atmosphere in the Richard Mille Racing garage was tense.

“We were all pressing each other’s hands, we were all super-nervous!” says Floersch. “Once Tatiana crossed the finish line, we started crying. It was so emotional.”

A ninth-place finish in the LMP2 class at the 24 Hours was the high point of the all-female team’s first year in ACO-sanctioned endurance competition that also included the European Le Mans Series. With all three drivers new to Le Mans, no Test Day and a greatly condensed schedule, they faced a steep learning curve, but with Phillipe Sinault’s experienced Signatech crew on hand to guide them through, none put a foot wrong.

“The most difficult part was that at Le Mans we only got one day where we had practice in the night, practice in the day, qualifying and then you had to go straight into the race,” says Calderon. “We couldn’t have picked a more difficult year to start, but nobody did a big mistake and I think we did all a great job. We can really be proud, especially given the difficult circumstances of how we started the year.” 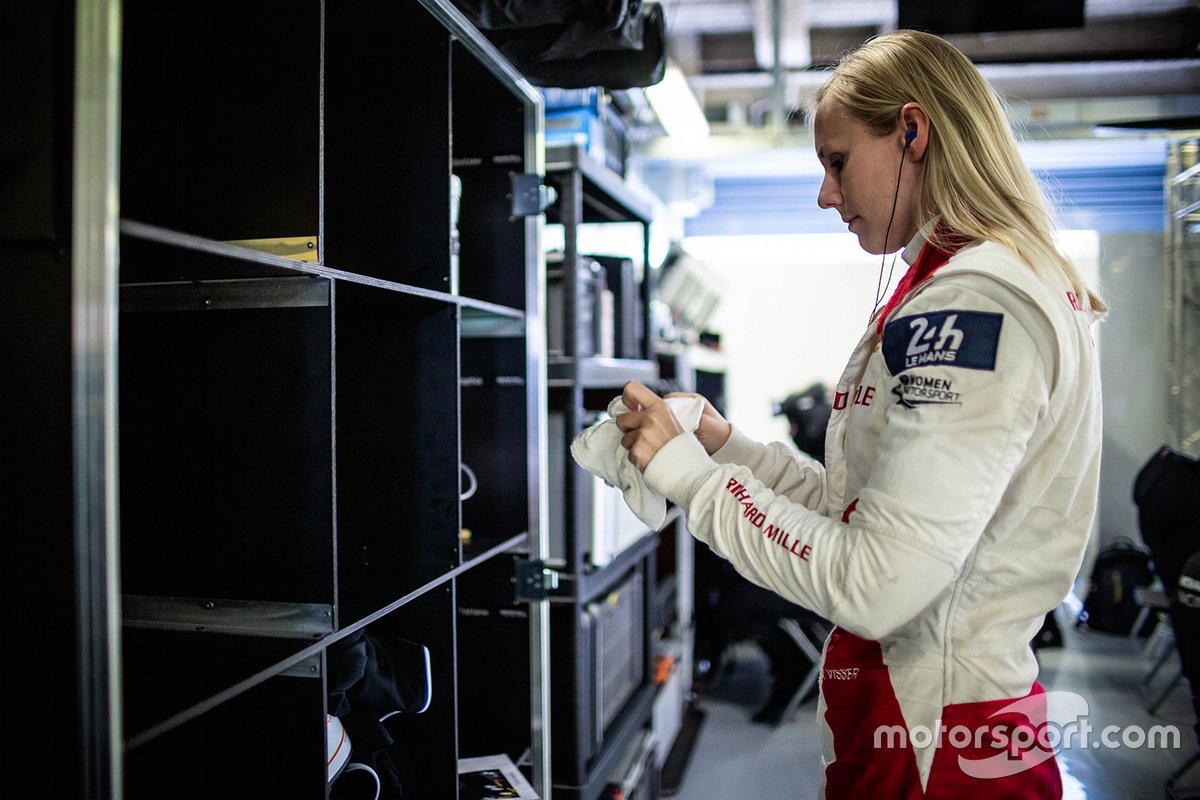 In a year of disruption caused by the pandemic, Richard Mille Racing also suffered an early setback when team ‘captain’ Katherine Legge was injured in a testing crash prior to the first ELMS race at Paul Ricard and forced to sit out the season. An experienced sportscar hand with eight starts in the Daytona 24 Hours to her name dating back to 2007, a key part of Legge’s role in the team was to steer endurance rookies Calderon and Floersch through their first tentative steps, so her injury proved “a big loss”, according to the Colombian.

Legge says she has not been “as involved as I would like” while recuperating in the US, but is now “95% there” on fitness ahead of a planned return with Richard Mille Racing next season as the team graduates from the ELMS to the World Endurance Championship.

“I’ve watched literally every single laptime and I’ve been texting with the team, but there’s not much I can do from being in a different time zone to help,” Legge explains. “The only thing I can do is to pay attention to everything that’s going on.

“I’ve got strength in everything apart from my left calf and it’s almost there. I’m missing maybe 10% just in my muscle, but it’s really close. I’m ready for 2021 to begin!”

With Legge sidelined, the Richard Mille Racing team moved quickly to secure W Series race-winner Visser from the second round of the ELMS at Spa, after Calderon had been partnered by stand-in Andre Negrao at Paul Ricard. But due to scheduling clashes with Floersch’s Formula 3 programme, the trio would only race together for the first time at the 24 Hours itself, the German having made her endurance debut in the second Paul Ricard ELMS round alongside Visser while Calderon contested a clashing Super Formula round at Motegi.

However, Floersch reckons it was “not that difficult” to adjust to working together, as they “all got on really well from the beginning” and set about working on their common goal.

“I don’t think we had any issues throughout the whole week in Le Mans,” she says. “We actually shared a little house together which was super-fun. We had some ice cream there...” 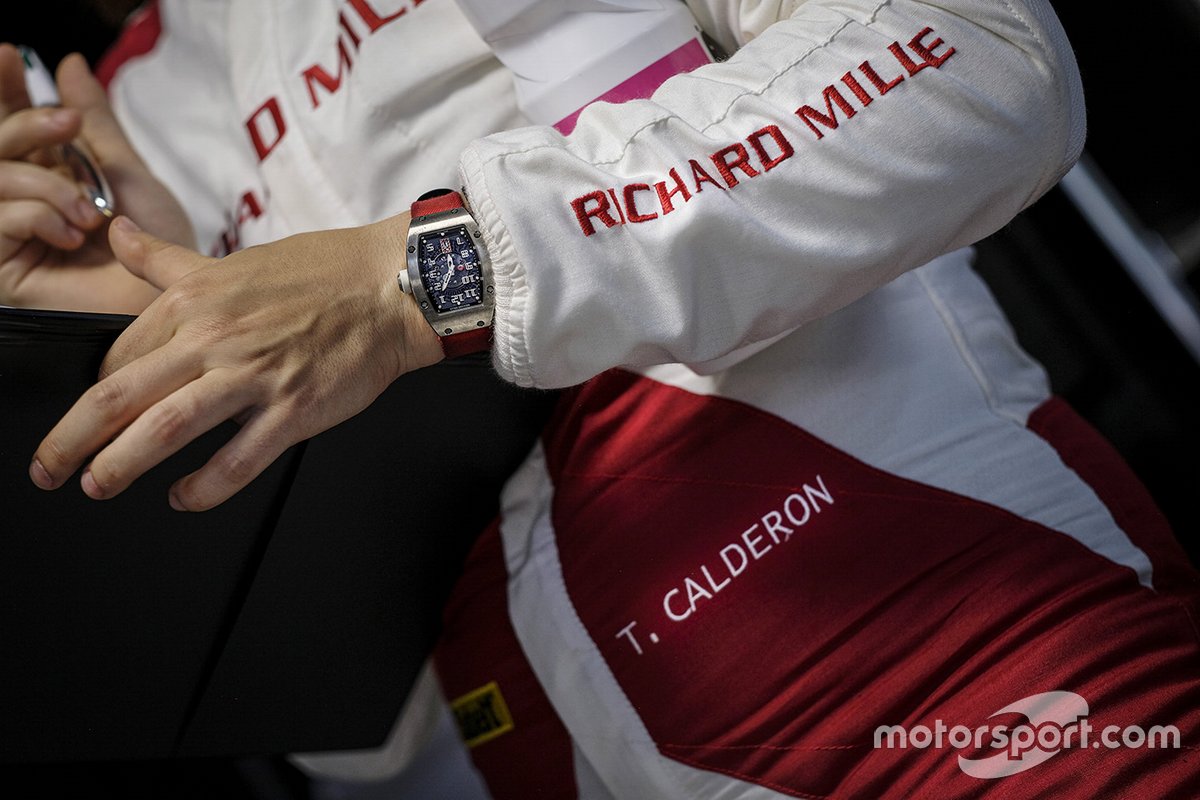 All three drivers are well-used to being in the minority as females in motorsport, so competing together as an all-female team made little difference to the pressure they are already all too familiar with, reckons Calderon.

“We know how it feels to be a female in a male-dominant sport so that made us closer together as a team,” she says. “We really want to show the world that we can do it and be as competitive as the guys.

“I didn’t feel any extra pressure because I think we’ve been used to this since the very beginning, but it was very special to be a part of a group of females trying to make the most out of this amazing opportunity from Richard Mille with support from the FIA Women in Motorsport Commission.”

In fact, far from feeling pressure, the drivers conceded that for their first experience of Le Mans, the subdued atmosphere resulting from the absence of fans amid the pandemic meant there were fewer distractions and helped them to focus on the task at hand.

“Working with the engineers was calmer because you had nothing else to do apart from working with your engineers and team-mates!” says Floersch.

“It’s a completely different Le Mans when you have all these PR commitments, the autograph session, the parade,” adds Calderon. “It’s great as a driver and you want to live those moments, but I think as three rookies it was good that we had it a bit more relaxed.”

Even so, with all the adrenaline of the race, the drivers struggled to get sleep when they weren’t in the car - as Visser recalled, “we’d been awake for more than 30 hours in the end, we constantly wanted to know what was going on”. For Calderon especially, it was difficult to switch off after enjoying a scrap with childhood hero and compatriot Juan-Pablo Montoya in the opening stint.

“I remember the engineer telling me, ‘Montoya is behind you’ and it’s like ‘okay, can you just freeze this moment please!’” she says.

After a gruelling race of intense concentration, the emotion at the finish was perhaps understandable.

“There are people dreaming just to finish Le Mans and we did it in the top 10 as the first female LMP2 line-up,” explains Calderon. “To cross the line was something I will remember forever and I hope that we can all build more memories like this.”

“We didn’t really have any expectations,” Visser adds. “We just wanted to keep improving throughout the race and make no mistakes. In the end we managed to finish top 10 with three rookies in a special 24 hours where we had a lot less preparation than normal.”

“For our first year, considering this situation I think we got the best out of it,” Calderon concludes. “We got to do testing, we got almost all the races that we planned at the beginning of the year, the work we have been doing with the team has been incredible so I feel really lucky to have been able to do this.

“I can’t wait for the story to continue and to hopefully put everything that we learned to use now that we showed the world that we can do the job.”

Under more normal circumstances than the all-round unusual experience of 2020, count on them doing just that.

This article was brought to you by richardmille.com