TF Sport boss Tom Ferrier has explained the “turning point” in the GTE Am race at the Le Mans 24 Hours which handed the initiative to the class-winning #83 Ferrari.

The #33 TF Aston Martin Vantage of Felipe Fraga, Dylan Pereira and Ben Keating eventually finished second, a lap behind Nicklas Nielsen, Alessio Rovera and Francois Perrodo’s AF Corse Ferrari after a close battle that lasted for much of the race.

TF had recovered from Fraga being turned around on the first lap of green flag running to take the lead by the end of Fraga’s opening treble stint and, after handing over to Pereira, gained a minute on the field in the fourth hour when the rest of the pack was split behind a different safety car following Marcos Gomes’s crash at Indianapolis.

The 2020 class-winning squad responded by plugging in Bronze driver Keating earlier than planned for a single stint and had cycled back to Fraga in hour seven when the Brazilian hit debris on the approach to the first Mulsanne Chicane, puncturing both rear tyres.

This came moments after Project 1 Porsche driver Egidio Perfetti also hit debris and crashed out, but Fraga managed to keep the car pointing straight – nosing gently into the tyres before returning slowly to the pits.

Making a second stop – where the team made a precautionary change of the diffuser – just four laps after Fraga had climbed aboard meant TF was offset against the #83 Ferrari and having led 46 laps before the incident, it only did so for another 16 laps across the remainder of the race.

Asked if he considered it a race that had got away from the team, Ferrier told Motorsport.com: “I don’t think you can ever say you think you should have won a 24-hour race, but we had the package to win it and we were in the right position to be able to do it.

“We were disappointed that we couldn’t fight a bit more near the end and take it to them and I think we would have done that if it hadn’t been for the puncture.

“I guess that was the big turning point for us in the race, the puncture and the loss of time trying to get it back very slowly.” 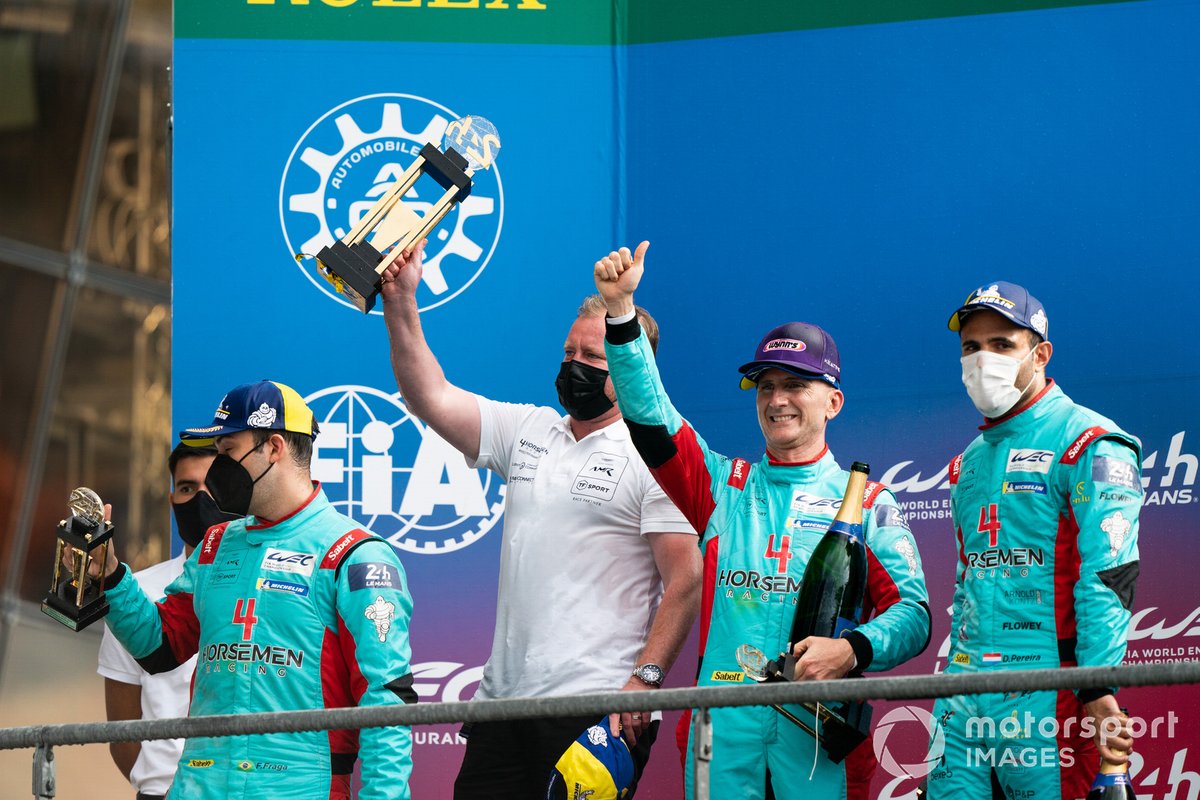 TF Sport celebrates its second place in GTE Am

Ferrier said that the Ferrari’s superior stint lengths may have resulted in the same outcome even without the puncture, as #83 could run 15-lap stints relative to the 14 of the Aston.

“Would we have maintained that safety car gap [without the puncture]? Who knows,” he said.

“Quite often when you’re in front things go your way so maybe, but the guys in the #83 had a lot of pace over the night so I think they would’ve quite easily been back with us.

“They could always do 15 laps on fuel at any pace and we could only do 14, so that made a big difference with where they could go with strategy compared to us. I think that probably played in their favour hugely.”

Ferrier added that he was “very impressed” by Le Mans rookie Pereira, who claimed the fastest lap of the class with a 3m49.707s on Sunday morning.

“He handled himself really well for a young driver that’s not got huge endurance racing experience,” said Ferrier.

“At Le Mans when you’re young and ballsy and prepared to risk quite a lot, you can turn a very fast laptime when the track is at a good temperature and it’s rubbered in and you’re low on fuel, but to be fair to him he didn’t make any mistakes at all.”