The 2013 Le Mans 24 Hours included a number of fantastic achievements for Asian Le Mans Series teams and drivers and an all-round exciting showing of Asian motorsports.

The 2013 Asian Le Mans Series is now the next stepping stone to qualification for the 2014 Le Mans 24 Hours, with invitations to the race awarded to both the series winner and runner up in the GTC class, and the series winner in LM P2.

OAK Racing who will be contesting the LM P2 class in Asian Le Mans Series, achieved an incredible one-two finish in LM P2, finishing seventh and eighth overall and dominating the race throughout.

AF Corse put up a very strong showing, with Japan’s Kamui Kobayashi and Hong Kong’s Darryl O’Young both driving for the Italian team, and the team will be hoping to build on this performance in the GTC class in Asian Le Mans Series 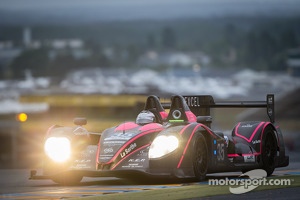 KCMG, China’s first ever team to race in Le Mans, were going very impressively in LM P2 before they were unfortunately forced to retire in hour 19 of the race after 241 laps due to technical issues. Ho-Pin Tung was amongst the team of drivers and he will join OAK Racing for the 2013 Asian Le Mans Series. KCMG will be in the hunt for automatic qualification into next year's Le Mans race through the LM P2 class in this year's Asian Le Mans Series.

Andrea Bertolini completed the race with JMW Motorsport and will be driving for AF Corse in GTC in the 2013 Asian Le Mans Series.

In addition to these successes, Nissan are congratulated on their superb Nismo engine that powered OAK Racing and teams across the LM P2 class. Nissan also unveiled their incredible new all-electric ZEOD RC that they plan on entering in the 2014 Le Mans race, which signifies a fantastic breakthrough in endurance racing. Toyota were able to put up a very strong performance finishing 2nd and 4th overall. India’s Karun Chandhok was once again present in Le Mans, and racing with Murphy Prototypes in LM P2. Congfu Cheng from China completed the race with Rebellion in their LM P1 car, whilst Japanese drivers Shinji Nakano (Delta-ADR) and Keiko Ihara (Gulf Racing Middle East) were not able to complete the race, but represented Asia brilliantly.

All the teams and drivers, and fans across Asia should be very proud of the region’s performance, and can look forward to further success in the future.

With the 2013 Le Mans now completed endurance racing now looks ahead to August 4th and the first race of the 2013 Asian Le Mans Series at Inje Speedium in South Korea.

Emotional but exciting weekend of racing behind us