Ryan Dalziel: "You come to Le Mans and you’re going against Europeans that run these tires and fuel and so you come here with a big learning curve." 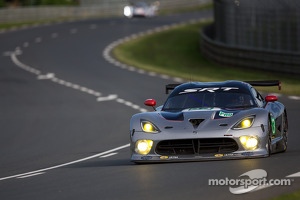 Gary Johnson – SRT Motorsports Racing Manager: “I think we definitely made inroads at the very end of the second session today, moving up quite a bit the last couple laps. I just felt if we had another hour or so we could have done even better. The team did a great job pulling it all together over the last two days. We’ll do a little more work in the warm-up session on Saturday and then we’ll have to go for it.”

IS IT FRUSTRATING WHEN YOU SEE THE CLOCK TICKING AND YOU CAN’T GET BACK ON THE TRACK? “It ends up out of your control because other people are having trouble. I saw a lot of pretty aggressive driving out there during the qualifying session which surprised me. There were probably a lot of red flags that probably shouldn’t have been there. That obviously caused us some issues but of course everyone else had the same issues too.”


HOW DIFFERENT IS THIS 24 HOURS OF LE MANS EVENT FOR YOU COMPARED WITH LAST YEAR WHEN YOU WON? “You know it’s actually totally different on a bunch of different levels. I think some of the stuff we’ve come up against here is the challenge facing the US-based teams. You come to Le Mans and you’re going against Europeans that run these tires and fuel and so you come here with a big learning curve.

The difference last year was that I was already running the European series and the team was pretty established on this tire and this fuel, so we kind of came into it I think knowing what we had whereas, obviously with the new SRT Viper GTS-R, we’ve come into this weekend waiting to see how this all turned out.

“But I think we’re happy with what race pace is going to be. We haven’t done any kind of qualifying runs and we’ve focused more on having a car for 24 hours, much like we did at Sebring and it obviously paid off in race pace. We’re looking forward to the race. It’s an honor to be here, it’s an honor to be here with a manufacturer like this and it’s great to be a part of the return to Le Mans for Viper.”

HOW DO YOU KEEP UP WITH THE CHANGING TRACK CONDITIONS DURING THE RACE? “When it comes to the race the only thing you can change is tire compound. We can vary our grip levels based on what compound: soft, medium or hard that we want to run. So you keep an eye on the ambient temperatures, track temperatures, making tire pressure adjustments and you try and stay on top of it best you can. But ultimately once you start the race, the setup of the car at the start is the car you’re going to run. There are some little changes we can make along the way.

“It was a difficult session for everybody. I think everybody was obviously quite desperate with the lack of track time and cars were moving off pretty much everywhere which hurt us when we were trying to stick to staying on the track and go through our test plan. It’s one of those things we’ve all got enough laps under our belts now and obviously myself, Marc (Goossens) and Dominik in the 53 car, we’ve done this race enough times that we know where to go left and where to go right so we’re ready for the race.”


THIS IS YOUR FIRST RACE AT LE MANS AND YOU’VE HAD TO DEAL WITH A GOOD BIT OF LOST PRACTICE TIME. HOW DIFFICULT IS THAT? “It’s definitely tough to come to Le Mans for the first time and you know not have the track time that all the drivers want allocated to them. When you have unfortunate situations with the rain going on and off today and cars on track creating red flag situations, it’s definitely a little bit more difficult.

But we’re feeling pretty good. We’re relying on our team. The Vipers are running pretty well I think for the race. It’s a very long race and while qualifying is important, I believe the overall drivability is more important and that’s what we have.”

SEVERAL CARS SPUN OUT DURING TONIGHT’S FINAL SESSION. DOES THE RACETRACK LOSE A LOT OF GRIP AT NIGHT? “Looking at the track temperature from this afternoon until now, it dropped easily 10 degrees Celsius. And what we saw in the last half-hour was some other cars changing up tire compounds and that kind of stuff. It’s something we need to adapt for the next time we come back.”