Under the SMP Racing team banner, Zlobin says support from Ferrari and a custom monocoque designed and build at the same factory that produced the successful Peugeot prototypes will be putting the hardware together.

"We intend to (compete) in the European Le Mans Series next season with an LMP2," said Zlobin in an interview with Endurance.info. "Ultimately, we want to build our own LMP2 chassis with a full Russian entity. Not only is our aim to take part in the 24 Hours of Le Mans, but to win it. We want to be the first Russian team to win at Le Mans." 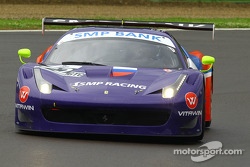 "Le Mans is as known (in Russia) as Formula One, and the Indy 500," Zlobin added. "Le Mans is magical and full of history.

SMP Racing is currently active in Formula Renault 2.0 Alps, and has returned to the Blancpain Endurance Series with support from the Russian Automobile Federation running with Ferrari.

"The Federation wants to show that motorsport has its place in Russia," he said.

Part of the mandate of SMP Racing is to give Russian pilots an opportunity to drive top quality GT and Prototype cars with the intentions of moving them on to Formula One.

"If we look at the example of go-karts, there are about about 60 Russian pilots who race at the European level," said Zlobin. "We begin to prepare pits for Le Mans with the World Series by Renault. It is a long walk to the prototype. Before taking part in Le Mans, I drove in Formula 1, and it really helped me better understand the control of the prototype.

Aleshin making the switch from IndyCar to LMP2