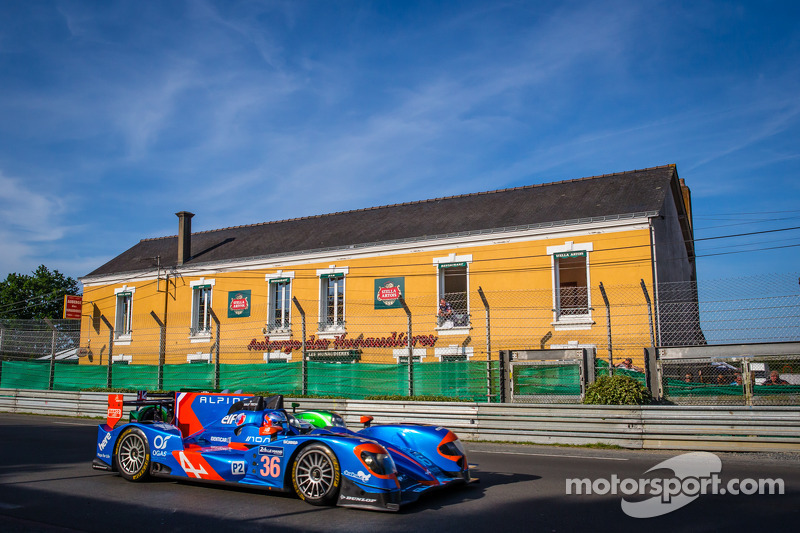 Teams running the ORECA chassis were able to pull out good results, notably with Signatech-Alpine.

The legend of Le Mans always has surprises in store and the 2014 edition was no different. Accidents, mechanical woes and unpredictable weather were all present to make this 2014 edition of the 24 Hours of Le Mans another tough race in La Sarthe. The LM P2 class, particularly competitive with 17 cars and several constructors present, delivered what it promised. With numerous ups and downs, as well as leader changes, the race was close up to the final hours.

Teams running the ORECA chassis were able to pull out good results, notably with Signatech-Alpine. With the Alpine A450b, designed and built by ORECA, Paul-Loup Chatin (winner of the Jean Rondeau Prize), Nelson Panciatici and Oliver Webb claim third place in LM P2. In its debut, Sébastien Loeb Racing finishes just off the podium in fourth place with the ORECA 03R driven by Vincent Capillaire, Jan Charouz and René Rast. Finally, after leading the race for a time, Race Performance ends the day in eighth place with drivers Franck Mailleux, Michel Frey and John Lancaster.

Alongside the ORECA 03R’s positive debut, the REBELLION R-One was making its second competitive start. Designed and built by ORECA Technology for REBELLION Racing, the prototype finished in an impressive fourth position overall, behind two Audis and one Toyota. Despite still being new, the R-One driven by Nicolas Prost, Nick Heidfeld and Mathias Beche ended the twice-around the clock classic just off the podium overall and posted promising laptimes.

“ Le Mans is ruthless and this edition showed that with numerous accidents and several mechanical breaks, in all classes “ underlines Hugues de Chaunac, president of the Group ORECA. “ Our ORECA 03R showed its competitiveness, notably at the start of the race. This proves that the technical decisions we made were the right ones, even if we would have prefered to win. Bravo to Signatech-Alpine for a good podium finish with the Alpine A450b and to Sébastien Loeb Racing, with a convincing fourth place finish for its debut at Le Mans. We are disappointed for the teams that had problems or had accidents, but I know there will be better days.

“ And finally, ORECA Technology is proud of the REBELLION R-One performance. The team had a solid race to claim an impressive fourth place overall. This confirms the car’s potential. We will work hand in hand to make sure that performance is every better in the future. “

Paul-Loup Chatin, 3rd LM P2 (Alpine A450b) and Jean Rondeau Prize: “ The race went well for us, even if we’re a little disappointed nonetheless. Were in the hunt for victory for a long time until we had to change a wheel hub. A podium, this third place, is still a good result. The car was very good during the entire race and the entire team did an excellent job, as did Nelson (Panciatici) and Oliver (Webb). I enjoyed myself and I tried to take advantage of these 24 Hours of Le Mans. When my engineer told me it was the last lap I opened my eyes wide ! “

Léo Thomas, 4th LM P2 : (ORECA 03R n°24/Sébastien Loeb Racing): “ The result for the team is positive. There were a few errors but nothing major. This is normal considering it was our first participation. We finished ahead of several teams that have more experience than us, which is satisfying. We’ve acquired a lot of experience during these two weeks at Le Mans. To finish fourth is a good result for a debut, with a reliable car and drivers who respected our orders and did a good job. There were a few tough moments, but the team stayed strong and was able to rebound every time. That’s our strenght and always has been . “

Franck Mailleux, 8th LM P2 (ORECA 03R n°34/Race Performance): “ We showed that we should be taken seriously. Our package was solid and proven, and I was certain we could fight for the top five and that a podium finish was doable. I’m disappointed because it was mechanical woes that kepts us from a strong finish. Michel (Frey) had a great race and John (Lancaster) had a very good debut at Le Mans. There are several positives to remember, and that’s not surprising. I would have preferred to have a race without issues to confirm our potential with a finish further up the running order. “

Maarten De Busser, retired (ORECA 03R n°47, KCMG): “ We are disappointed. If you look at our performance at the start of the race, we clearly had the performance to fight for a podium finish, or better. We showed that we have the capacity to race up front. Things got complicated when the rain arrived : with slicks in those conditions, Richard (Bradley) found himself a passenger in the car as it slid into a tyre barrier. We made repairs in two parts : first at the front, then at the rear. We were still in the race and had started our comeback when Alex (Imperatori) started feeling a vibration. He had an accident, and we think it has to do with the first accident. We were competitive and we gave i tour all…so we are disappointed but we’ll be back. “


After qualifying in scattered positions, the ORECA 03R entries and the Alpine A450b had a good start to the 2014 edition. The race is already intense with the top five running within less than three seconds of each other, including Signatech-Alpine and KCMG. The Chinese team is pushing hard thanks to Alex Imperatori who even takes the lead before the end of the first half hour! Race Performance is also there, as the No. 34 moves up the running order in the hands of Franck Mailleux.

After 1:20 of racing, KCMG is in the lead, ahead of the Signatech-Alpine and Race Performance, proof that the ORECA chassis is in its element. The rain makes an appearance and events unfold from there. Racing on slicks on a wet track surface, the KCMG ORECA 03R, running first, loses control and slides into the tire barrier. Race Performance inherits the lead ahead of Signatech-Alpine and another ORECA 03R of Murphy Prototypes. Unfortunately, the Irish team is also struck by bad luck, falling victim to contact with another competitor.

As the afternoon comes to a close, the track dries and Race Performance is still fighting at the top of the running order with Signatech-Alpine in the top three. While KCMG, following another accident (seventh hour) and Murphy Prototypes (ninth hour) are forced to retire, after both spent a long time at the front of the pack. As the sun rises in the morning, the trio of Chatin/Panciatici/Webb is solidly in second place while Mailleux/Frey/Lancaster is just outside of the provisional podium.

If the night was good, the morning will be more difficult for Race Performance, which is served a stop and go penalty for speeding in the pitlane (17th hour), before having to change a fuel pump (18th hour) and the starter (22nd hour). For Signatech-Alpine, the left front wheel hub has to be changed (19th hour). The Philippe Sinault-led team rejoins the action in fourth place, ahead of Sébastien Loeb Racing, who are themselves running a conservative but smart race.

The competitors enter the final hours, but the legend of Le Mans has not had its final word. Several cars have issues and the No. 36 Alpine A450b takes advantage to find third place, while the No. 24 ORECA 03R alternates between fourth and fifth positions. The pace doesn’t slow for the trio of Chatin/Panciatici/Webb : with an impressive end of race push, Signatech-Alpine claims a good podium finish with third place, a few months after claiming the ELMS championship title. Sébastien Loeb Racing also pushed at the end to finish fourth with Capillaire/Charouz/Rast. Of note is Race Performance’s eighth place finish for Mailleux/Frey/Lancaster, while SMP Racing rounds out the results with the No. 27 falling victim to numerous problem.