Over the past weeks, Level 5 Motorsports have shared their preparation for the 24 Hours of Le Mans. Today the team took to the Circuit de la Sarthe for the official test day.

LE MANS, FRANCE. — Despite challenging weather conditions, Level 5 Motorsports achieved its objective of completing a trouble-free day of testing in preparation for the 24 Hours of Le Mans. Sunday’s official test served as the first opportunity for all 56 teams in this year’s race to take to the legendary Circuit de la Sarthe, in order to gain as much data prior the endurance classic in two weeks’ time. 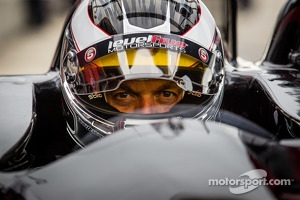 However, Mother Nature did not play into anyone’s favor, as rain hampered Level 5’s extensive testing plan for its two Siemens/Alpina Watches/Ohiya Casino Resort-sponsored Honda Performance Development ARX-03b LMP2 cars for team principal Scott Tucker and co-drivers Marino Franchitti and Ryan Briscoe. A day that was meant to see more than 1,000 miles of running was cut in half due to showers.

Instead of risking its equipment, which was air-freighted from Level 5’s Madison, Wis. headquarters for the month-long event in France, the David Stone-led organization waited for conditions to improve in the afternoon to begin its testing program in earnest. That strategy paid off, as both the No. 33 and No. 44 entries ran like clockwork during the four-hour session, proving the reliability of the HPD package, which won last year’s race.

All three drivers turned laps between the two cars, including Briscoe, who made his Le Mans debut and successfully completed his “rookie” requirements for the race. In fact, it was Briscoe’s 3:45.158 lap that held as the quickest time among the Level 5 drivers. The No. 33 car was 16th on the time sheets, while the No. 44 “test car” ended the day 19th, thanks to Tucker’s 3:48.380 time.

“We didn’t get as much track time as we would have hoped for, but we can’t control the weather,” said Tucker, a nine-time national driving champion. “It’s a little disappointing to have traveled this far to get rained on but we made some good progress once it dried out. It was great getting back on the track and picking up where we left off last year. We weren’t going for quick times, so we’re not too worried heading into the race.”

The Level 5 HPDs completed nearly 500 miles of running combined, which made it a successful test from all involved.

“We sat out the morning evaluating the risk-reward factors of going out or not. Deciding as to when and with one car or two,” Level 5 team manager David Stone explained. “As the day went on we decided to send the No. 44 car, our second, non-race entered car first. A bit later we sent the No. 33 race entry out as well. The trick is always finding what your experience tells you is the right balance and risk. On one hand you want to minimize your risk of damage in advance of a race like Le Mans and at the same time gain the knowledge you may need to draw from should we experience a wet track in the race. Luckily, it dried out later in the afternoon so we got a bit of both conditions.

“The guys seem to be pretty happy with the car itself,” Stone added. “We didn’t make a lot of changes during the day which points to some good advanced work by our engineering group. It’s a little hard to say where the other teams are and what they’re showing. Based on the times we saw today, I would be surprised if the fastest times were a lot faster. We’ll see how that goes once we get to practice and qualifying.”

Preparations for Le Mans continue on Tuesday when Level 5’s No. 33 race car will take to the 2.655-mile Bugatti Circuit for a shakedown prior to the start of official practice and qualifying next week. The 90th anniversary 24 Hours of Le Mans gets underway Saturday, June 22.