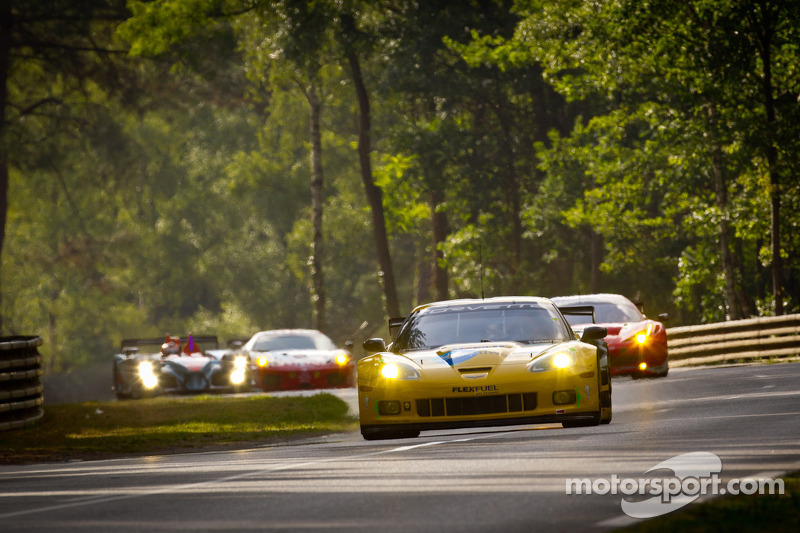 A massive accident involving the #8 LMP1 Toyota TS030 of Anthony Davidson and the #81 GTE-Am AF Corse Ferrari F458 of Piergiuseppe Perazzini has brought to a temporary halt a very entertaining and thrilling GT battle at the 6 hour mark of the 2012 Le Mans 24 hour race.

The current top 3 cars in GTE-Pro have partaken in a 6 way battle for the lead, along with the #73 Corvette C6R, currently 4th after recovering after a slow opening stint, the #59 Luxury Racing Ferrari F458 in 5th, and the #97 Aston Martin V8 Vantage, which took advantage of the late Safety Car period to change brake discs, resulting in a longer pitstop and currently in 6th place.

Westbrook currently leads, but crucially is in the first Safety Car group while Vilander and Henzler are both in the second.

The #74 Corvette, #51 AF Corse Ferrari and #97 Aston Martin Vantage V8 fought for the overall lead between stops and often running closely together ontrack, less than two minutes apart, with the #77 Felbermayr-Proton Porsche hovering in 4th position, ready to capitalize, which it has, improving to 3rd place in class.

The Pole sitting #59 Luxury Racing Ferrari F458 is currently in 5th place, as it recovers from a problem when it ran out of fuel right at the pitlane entry while making its first scheduled pitstop, which has dropped it down the order slightly, although a strong comeback has so far not resulted in any problems and the car is still in the hunt. The only car to have hit major trouble at this point is the #80 Flying Lizards Porsche; suspension trouble has lost it 9 laps but it is currently ontrack, last in class.

The Larbre Corvette has inherited the lead of the GTE-Am class after the long-time leader, the #79 Flying Lizards Porsche 997 hit trouble at 7.40pm when a suspected fluid leak caused it to hit the tyrewall at Arnage. The GTE-Am lead changed between Nicolas Armindo in the #67 Porsche and Julien Canal in the #50 Corvette, before Armindo pitted to hand the lead to Canal, Pons re-joining in 3rd overall. The #58 Ferrari is directly behind the #50 Corvette in the safety car train.

The #79 Flying Lizards Porsche which had led the class for quite some time, no doubt thanks to a very strong opening stint by Pro driver Patrick Pilet, with team owner Seth Neiman driving consistently along with Spencer Pumpelly. The #3 LMP1 Audi went off at the Forza chicane while lapping the Porsche while #79 held its line, then suddenly #79 was spotted with rear damage and a small fire at the rear as it exited Arnage, possibly due to fluid loss which may have caused the #3 Audis incident. The car is still undergoing repair at the 6 hour mark.

The #81 AF Corse Ferrari F458 had a fairly quiet race with Pro-driver Matt Griffin’s off into the gravel at Indianapolis being the only issue of note until 20.00 when AM driver Piergiuseppe Perazzini was being lapped by the #8 LMP1 Toyota TS030 of Anthony Davidson at Mulsanne Corner, television replays suggest Perazzini did not see the Toyota coming up behind him and the Toyota was literally launched into the air by the F458, somersaulting in mid-air before impacting heavily with the tyrewall, the F458 also impacting heavily with the barriers, rolling onto its roof as it went into the tyre wall. Given that both impacts into the tyrewall have damaged the barriers, a long safety car session resulted. The #81 car became the first official GTE retirement. Both drivers are reported as being uninjured.

After a strong first hour, the #99 Aston Martin Vantage V8 has slid down dramatically after a strong opening stint, firstly a persistent misfire resulted in an unscheduled pitstop, then when this problem had been resolved, Kristian Poulsen hit the tyrewall at the Porsche curves, losing the rear wing of the car and requiring yet another long pitstop.

AF Corse-Waltrip have being driving a consistent race with Brian Vickers enjoying GT racing as opposed to NASCAR, still getting used to no track lights and no spotters, the team are currently in 4th place in class, while the #88 Felbermayr-Proton Porsche and the #57 Krohn Racing Ferrari F458 stay in contention in the top 6 in class.

DeltaWing and Toyota hit at quarter-distance