RML switches to Mazda power for 2009

The face of the LM P2 category of the European-based Le Mans Series has been transforming during the off-season. While a number of top-flight teams have discontinued its programs, others have been forging ahead with plans for the coming year. RML is ...

The face of the LM P2 category of the European-based Le Mans Series has been transforming during the off-season. While a number of top-flight teams have discontinued its programs, others have been forging ahead with plans for the coming year. RML is one of those, and today, the British squad confirmed that its Lola B08/80 coupe will have Mazda power in 2009. 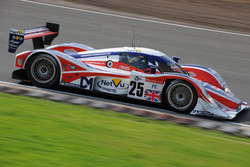 RML is the second customer team to campaign Mazda's two-liter, four-cylinder MZR-R engine, as Kruse-Schiller Motorsport used the AER-derived power plant in its Lola B05/40 this season. B-K Motorsports, which recently shut its doors, had the most success with the MZR-R in two seasons of the American Le Mans Series.

The team's switch to Mazda ends a six-year relationship with MG branding. During that time, drivers Tommy Erdos and Mike Newton scored back-to-back P2 victories in the 24 Hours of Le Mans, as well as the 2007 Le Mans Series class championship.

"The MG engine was nearing the end of its evolutionary prospects, but by contrast, the Mazda engine has the potential for considerable further development," said team manager Phil Barker. "It offers tremendous scope for enhancing performance over the coming years, while simultaneously offering us the opportunity to establish a relationship with a prestigious and forward-thinking organization like Mazda."

The two-year deal with Mazda will keep Newton and Erdos behind the wheel of RML's new Lola B08/80 coupe, which debuted at the season-ending round at Silverstone. The duo steered the car to a fourth place finish in class and hope to be regular contenders for wins in 2009.

"For a number of reasons we were well short of our full potential at Silverstone, yet we still gave a strong performance," Newton said. "We're ready to take delivery of the new Mazda engine any day now, and combined with what we learned at Silverstone, we've got plenty of data to carry us forward towards a test early next year. Now I'm just looking forward to showing what we can really do with the coupe."

In addition to competing in the five-round European championship, RML also has hopes to once again take part in the 24 Hours of Le Mans, entry permitting.

The tough economic times have indeed hit many teams in the Le Mans Series, but this announcement, along with another this week, has signaled reasons for optimism. Italian squad Racing Box confirmed that it will run two Lola B08/80 prototypes next season, joining RML and Quifel-ASM Team as definite entries in the P2 ranks.

"These are uncertain times, not just economically, but also in our sector of motorsport," said Erdos. "There are many changes coming, and we don't really know who we will be racing against next year, but the signs are that the series will remain strong. We're moving ahead with our own program, and I think we've made a very good decision."

Quifel-ASM goes with Zytek for 2009

EU3: Barwell moves back to Europe for 2009 campaign