The successful pair will form a partnership to design and build an all-new LMP1 for Le Mans and the World Endurance Championship.

Present in motor sport for the past 40 years, most notably as racing team and constructor, the ORECA Group will take on a new challenge in 2014. ORECA’s Technology department has been chosen by REBELLION to design, build and develop the new REBELLION R-One which will race in the LMP1 class, the top category in endurance. This new car, entered by the Swiss team REBELLION Racing at the 24 Hours of Le Mans and FIA World Championship, will benefit from ORECA’s know-how and expertise. The two outfits will work hand in hand to work on the exciting project. 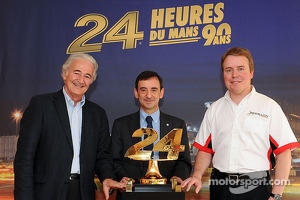 "Everyone at ORECA is very happy with this partnership with REBELLION Racing" said Hugues de Chaunac, President of the ORECA Group. "They are a team who have proven their ability in running an LM P1 program and who are ambitious. Along with our partnership with TOYOTA Motorsport Gmbh regarding their Le Mans program, this project to design the REBELLION’s car fits perfectly with our developing constructor activities and we are motivated by the idea of doing so with a professional outfit. We share in the desire for a captivating challenge."

"The new Regulations for 2014 provide a great opportunity for Privateer LMP1 entrants to challenge for overall race wins” said Bart Hayden, REBELLION Racing Team Manager. “At REBELLION Racing, we are motivated by the prospect of those victories. We want to build upon our success and reach an even higher level. We have chosen ORECA to develop and build the REBELLION R-ONE because they have a strong record of success and they have produced many successful prototype cars.”

Throughout the years, REBELLION Racing has shown itself as a top team in endurance racing: European Le Mans Series champions (2011), twice best private team at the 24 Hours of Le Mans (2011 and 2012), winner of the Private Teams Trophy in the FIA World Endurance Championship (2012) and winner at Petit Le Mans (2012).

“The ORECA Group's history is linked to that of the 24 Hours of Le Mans”, commented Pierre Fillon, president of the Automobile Club de l’Ouest. “In developing a new LM P1, the French company is moving forward in its involvement in allowing the REBELLION team to further increase their ambitions in the category. This ORECA-REBELLION partnership also shows the firm foundation that the new endurance regulations were built upon by the Automobile Club de l’Ouest in 2009 and which will take effect in 2014.”

In 2014, endurance racing will enter into a new era with the introduction of a new regulations package as well as a new technological approach. With this in mind, ORECA Technology will bring its engineering knowledge and experience in endurance to REBELLION Racing through the contruction of the new car, the REBELLION R-One.

"Endurance is taking an interesting turn with new regulations that change the playing field and opens up new perspectives. » explains Christophe Guibbal, R-One project manager at ORECA. "The cards will be shuffled and it’s a unique opportunity to start fresh. For us, engineers, it’s exciting : we can explore new horizons. Seizing the chance to innovate within the new regulations package is the key to this project and it’s with this attitude that ORECA is taking on this challenge."

The new 2014 regulations distinguish themselves clearly from the current rules. The cars will be lighter and the aerodynamics will consequently evolve. But the biggest difference will be the regulation of the engine performance, which will no longer be controlled within the air intake, but by a limitation of the energy available per lap and a limitation of fuel flow.

Final discussions are close to conclusion to extend the successful partnership between TOYOTA Motorsport GmbH (TMG) and REBELLION Racing started in 2011. Final specification of the updated TOYOTA RV8KLM engine, which will power the REBELLION R-ONE will be confirmed at a later date.

The design of the REBELLION R-One LM P1, which will be conceived new from the ground up, started a few weeks ago. More details will be unveiled at a later date.