British Racing driver Archie Hamilton will partner Johnny Mowlem and Mark Patterson in the third round of the FIA World Endurance Championship.

With the 24 Hours of Le Mans now just a month away, Ram Racing announces a change to the driver line up for its No.53 Ferrari 458 Italia LMGTE Am entry. British Racing driver Archie Hamilton will partner Johnny Mowlem and Mark Patterson in the third round of the FIA World Endurance Championship which takes place on 14/15 June.

BRDC Rising Star Archie, 23, started driving karts at the age of 11 and progressed to cars some five years later. He has competed in Formula Ford, Formula Renault, and Porsche Carrera Cup. In 2012 Archie had his first experience of LMP2 machinery, and went onto have a successful year in the International GT Open, a series he also competed in during 2013. 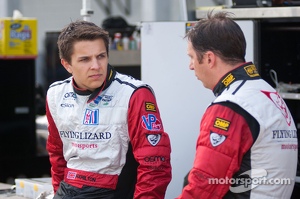 It will be the third visit to the 24 Hours of Le Mans for Archie who took a podium finish in the 2010 Porsche Carrera Cup support race. He made his official Le Mans debut last year behind the wheel of an LMP2 ORECA Nissan, but it was to be short lived as the team was forced into early retirement.

The famous endurance race is no stranger to the Hamilton name, with Archie’s grandfather Duncan having taken the honours during the 1953 event, co-driving a works C-Type Jaguar with Tony Rolt.

Ram Racing’s driver line up for the 24 Hours of Le Mans is now finalised.

Mowlem to retire “on own terms” from professional ranks