The Le Mans Series held their third round of the 2011 season this weekend at the world famous Autodromo Enzo e Dino Ferrari circuit. It was also the fourth round of the Intercontinental Le Mans Cup (ILMC) for the 2 top teams, Audi and Peugeot. At the Italian circuit in Imola, the fans the saw Peugeot Sport Total 908 Hdi-FAP number 7 entry of Sébastien Bourdais and Anthony Davidson cross the finish line first after 6 hours and 220 laps. Second place was also taken by Peugeot while Audi was third. 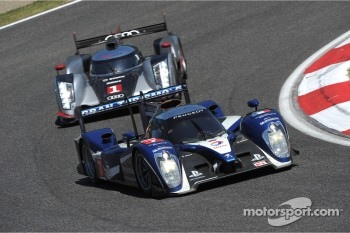 Davidson stated after Bourdais took the checkered flag, “It was a hard race to win!” He later added, "We expected the fight at the front would be closer, but we had a fantastic car. It worked out very well with Sébastien, we complemented each other.” Bourdais said, “I am very pleased to win my second race with Peugeot. I got on really well with Anthony, who was the quickest driver this weekend. Right from the word go, we found a set-up that worked for us both."

With the pole winning team of Bourdais and Davidson taking the victory, second place was also taken by Peugeot. About a minute later than their sister car, the number 8 entry driven by Franck Montagny and Stéphane Sarrazin crossed the line for a well-deserved 1-2 finish for the second time in this year’s ILMC contest. The French team’s first 1-2 was the 1000 km of Spa-Francochamps.

“What will stay with me most of all is the one-two for Peugeot, it’s fantastic for the entire team. We have to admit we had a slightly harder time that our team-mates," said Sarrazin. "I think the best team won.” Montagny added, "Once again, both our cars have completed the race, and this time in the top two places. I am proud to be part of this team. We had an excellent level of performance but were a little surprised to be so far ahead of our rivals. We know they are going to work hard to bounce back next time. There will be other great scraps to come.”

For Audi Sport, their day by judged of the result was good, but probably under the expectations of the German manufacturer. Audi was running two new R18 TDIs with an all new high aero package in mind to take the win. With a win, Audi would have taken the ILMC championship lead from their rivals, Peugeot, and continue on the path of winning after their success at the Le Mans 24 hours race.

At the first hour of the race everything was looking good when Audi´s number 1 car driven by Marcel Fassler was challenging Peugeot for the lead. After the first pit stop through, both Audi's number 1 (Fassler/Timo Bernhard) and number 3 (Allan McNish/Tom Kristensen) started to lose some ground to the Peugeots. From the start the two teams were close but pretty much after the first pitstop, the number 8 Peugeot was able to pass the number 1 Audi for 2nd place and after that the Peugeot´s started to pull away from Audis. At the end of the race, Audi cars finished 3rd and 4th with the number 1 Audi crossing the line first followed by the number 3 Audi of Tom Kristensen. Despite Kristensen being a very experienced sportscar driver, he was racing at Imola for the first time.

Dr. Wolfgang Ullrich, Head of Audi Motorsport commented: "We’re not happy with the result at Imola. We had an inconsistent performance. At the beginning of the race we were in contention, but then lost ground about halfway into the race which we weren’t able to make up in the end. It was the first time that we were running with this vehicle configuration in such high temperatures. Now we want to use the findings from Imola to fight for victory at Silverstone."

In the LMS title fight, Rebellion Racing took a one-two finish as well, finishing 5th and 6th overall. The Lola B10/60 Coupé Toyotas for the Rebellion team were settling up good speed for the petrol car division most of the race. Number 13 car of Jean Christophe Boullion and Andrea Bellichi finished as the best of the rest behind the Peugeots and Audis diesel powered cars by taking 5th. The team’s number 12 car of Nicolas Prost and Neel Jani was 6th while the Pescarolo Team was 7th. Pescarolo’s drivers Emmanuel Collard, Christophe Tinseau and Julien Jousse were challenging the Rebellion team but just 48 minutes before the finish, the brake disk exploded, forcing Pescarolo to make repairs in the pitlane, which cost them 5 laps. 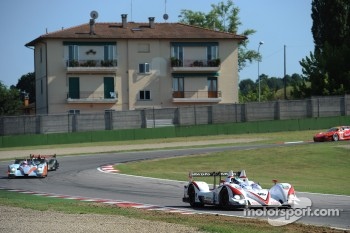 Boullion commented, "We have to be proud of the team and the work we have done. From the beginning of the season, the cars are better and better. This result is very good for us." His co-driver Bellichi said, "To be honest, from the beginning to the end, it has been a big, big fight. We had to push all the time and to keep our concentration to achieve this good result. I am very happy to have won here in Italy, close to my house in front of my familly, my friends and the fans."

In the LM P2 class, it was Greaves Motorsport with drivers Karim Ojjeh, Tom Kimber-Smith and Olivier Lombard taking a win for the Zytek Z11SN-Nissan package. For a long time it was looking like TDS Racing or Boutsen Energy Racing would win but both of the teams ended up with problems. When there was about 1h and 30 minutes to go Level 5 Motorsports was leading the class but late problems dropped the team and their drivers Christophe Bouchut, Joao Barbosa and Scott Tucker into third in class.

“This win was pretty special. The team did a fantastic job in getting the car turned round in the time available and their preparation and attention to detail are second to none, particularly after the exhausting victory at Le Mans. All three drivers drove brilliantly on a crowded, tight track. It was a real team effort with everyone giving 100%", said Team Principal, Tim Greaves.

For a long time in the race it was looking like the German pole sitters and their BMW Motorsport cohorts would take the class honors with 1-2 but the late misfortunes of the BMW Team Schnitzer M3s changed the standings. At first Dirk Werner and Pedro Lamy ended up having problems with air conditioning and spent time in the pits, and then Jörg Müller touched with the overall race winning Peugeot while leading the GTE PRO class. While Bourdais and the Peugeot collected a left rear puncture, Müller had to take their pitstop a bit earlier than planned. Even with what happened, Müller still returned to the track in the lead, looking like a strong candidate to win the race for BMW with his co-driver Augusto Farfus, who was the pole winner.

However, just 1 hour and 10 minutes before the end of the race, the leading #55 BMW was given a 1 minute stop and go penalty for a pit stop violation (fire extinguisher not in place), tossing all the hopes of winning into the trash can. That penalty moved the two AF Corse Ferraris into first and second in class, dropping BMW into third. 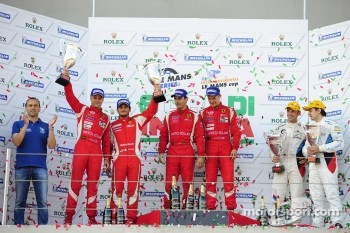 BMW´s team manager Charly Lamm commented, “There are two positive facts that we should take back home from Imola: The performance of our two BMW M3 GT cars was excellent. In addition, I want to pay a compliment to Dunlop. We had very strong tyres in what was the first real hot race of the season. The no. 55 BMW M3 GT was in the lead for long parts of the race. However, we had lost the radio connection and couldn’t communicate with the drivers. Jörg Müller came into the pits at short notice following an incident with a prototype and was unable to give us an advance warning. The team was working on the damaged air conditioning of car number 56. So the fire extinguisher wasn’t in the right place when Jörg came in. This was the reason for the penalty which threw us back to third. The other car battled it out on the front for a long while, before the problem with the air conditioning occurred.”

The positions in class did not change anymore during the last hour and AF Corse were very happy to take a one-two result to the delight of the home crowd and fans of the prancing horse. While Toni Vilander and Jaime Melo took the class honors in the #71 AF Corse Ferrari F458 Italia, the second place went to Giancarlo Fisichella and Gianmaria Bruni. Third was BMW Motorsport´s #55 squad driven by Jörg Müller and Farfus. For the teams contesting the ILMC points, the #51 of Fisichella and Bruni received the top one over the two BMWs. 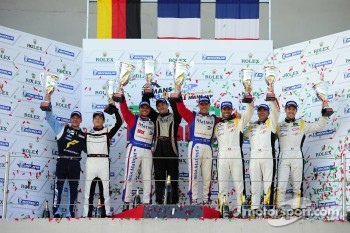 Formula Le Mans (FLM) teams had their own battle out of the four entries. The race was won by JMB Racing with drivers Manuel Rodrigues and Jean-Marc Menahem. Second place went to Pegasus Racing (Mirco Schultis/Patrick Simon/Julien Schell) and 3rd for Hope Racing (Luca Moro/Zhang Shanghi/Tor Gravis) . Last finisher of the class was Genoa Racing (Jens Petersen/Elton Julian/Christian Zugel). Genoa Racing was actually leading the class most of the time until at the last hour, the car started to have all kinds of problems and gremlins, eventually dropping the team into last finisher of the FLM entries.

Proton Competition were disqualified due to "an excessive period of steering of one the pilots". Porsche, Long, Roda and the team leave Imola with no points, and the Larbre Competition team moves up to second and receives the top ILMC points.