The proverbial adage, "quality, not quantity" might best be applied to the fleet of Porsche 911 GT3 RSRs ready to race in this year's 24 Hours of Le Mans. ...

The proverbial adage, "quality, not quantity" might best be applied to the fleet of Porsche 911 GT3 RSRs ready to race in this year's 24 Hours of Le Mans. 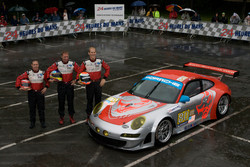 Porsche has five cars entered in LM GT2 this year, exactly half the number of Ferrari F430 GTs. Three have a legitimate chance at taking the class title, making the intra-manufacturer battle that much more interesting in the scope of the overall results.

For all its accolades in the U.S., Flying Lizard has only a best finish of third in class (2005) in four prior starts at Le Mans. The team still comes into La Sarthe riding high on the momentum of three consecutive class wins in ALMS, though one of its drivers, Patrick Long, is racing for a rival team, IMSA, this weekend.

Bergmeister discussed the importance of practice and preparation without the test day in May occurring this year.

"This year with less practice time we will have to make sure that first off Darren gets enough seat time to learn the track and then I think we have to start working on race set-up pretty much right away," Bergmeister said. "The good thing is we had a very fast car here the last two years, so we should be able to use that data also to help us this year."

Bergmeister usually races with Long in ALMS, and he said it should be a fun experience racing against him this weekend as it has been in years previous when the two have not driven the same car.

"I think it is going to be fun," he said. "Patrick is a great teammate and we have been driving together for quite some time now so we both know each other pretty well. I hope we will have a chance to drive together at some point during the race."

Long enters his sixth Le Mans driving for IMSA Performance for the third consecutive season. He talked about the intricacies of racing against his usual team, and the relative rags-to-riches story of his current team.

"I've raced here with Flying Lizard before, and raced with Petersen/White Lighting against TRG (The Racer's Group)," Long said. "I think Le Mans takes so much precedence and is so special it doesn't factor into ALMS." 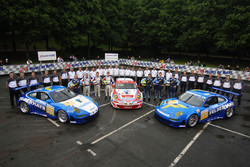 "It's an interesting story how IMSA have built themselves into one of the favorites not only at Le Mans but in LMS," he added. "It was really a few guys that worked in a car workshop preparing used cars who wanted to go to Le Mans."

The lone American factory Porsche pilot likened his leaving Flying Lizard to a stick-and-ball athlete competing for his or her home country in Olympic-type competition.

"It's like a hockey player going against their regular season teammates to play for their country," he said. "You treat each other fair, and it's a good fighting relationship."

Long also spoke of his appreciation for the brand he represents, Porsche, regardless of which team he drives for. "As an employee of the company, I truly have pride in the product, especially when racing hits that close to home. If Porsche wins this weekend, that's what it's all about."

"You have to believe with the product you endorse, otherwise it won't work out," he recalled. "There is a certain point that I realized I work for a company that I not only believe in but truly respect, and enjoy it and their branding."

"For me it is a dream, especially being French, as it is such a big event in France and all around the world," Pilet said. "We don't have a lot of practice this year. The thing here is to learn the track, go step by step, and try to go faster and faster lap after lap."

Henzler downplayed that fact and focused on both the competition and the potential pitfalls of a 24-hour race, having just competed in one three weeks ago at the Nurburgring (and co-driving with Lietz).

"We are not the only team here with three good drivers," Henzler said. "For sure we came to win the race, but you need a lot of luck, and have to run without a problem. It's touch and go, plus you could have something happen with a prototype."

The two remaining Porsches had their own dramas at scrutineering. The #75 Endurance Asia Team, entered from China, went through inspection four cars after its originally scheduled time.

The fifth and final Porsche this year was confirmed after another car's withdrawal. The #70 Team Felbermayr-Proton car that their LMS rival team IMSA will field this weekend utilizes drivers from both teams to satisfy each team's original request for an additional entry.

For the traditional scrutineering photo shoot of three drivers and team members per each car, only one of the three drivers was present for car #70. Poor Michel Lecourt was left standing as the Felbermayrs, Horst Sr. and Jr., were AWOL!

The only standing the Porsche drivers want to be doing come Sunday at 3:00 PM is on the top step of the podium, and the battle between three of Porsche's horses should be quite a scrap.

A date with destiny for Drayson Racing