The No. 20 Porsche on top early in Le Mans qualifying

Was Porsche sandbagging in practice? After posting times behind all of their main rivals at Toyota and Audi, the winningest team in Le Mans history rocketed to the top of the charts at the start of qualifying. In fact, the Porsche drivers managed to put their cars first and second on the time sheets.

It wasn't all great for Porsche though, with the No. 14 machine suffering a hydraulic leak. They placed second overall, around eight tenths off of teammate Brendon Hartley going fastest of all in the No. 20 Porsche with a lap time of three minutes and 23.157 seconds.

Toyota followed in third and fourth, over seconds behind the leading Porsche. The No. 2 Audi rounded out the top five. Like practice earlier, red flags marred this qualifying session.

In LMP2, Oliver Pla put the No. 26 G-Drive Racing Morgan-Nissan on the top spot for now. Ferrari is control of both GTE classes at the moment with AF Corse team leading the way in GTE Pro with Gianmaria Bruni behind the wheel of the No. 52 machine. In GTE Am, it's SMP Racing's Andrea Bertolini who was able to outpace all others in the No. 72 car. 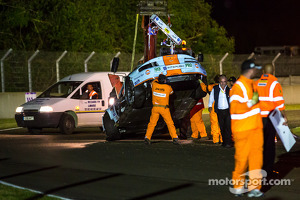 There were a plethora of incidents including, but not limited to, No. 62 AF Corse Ferrari (spin), No. 76 IMSA Performance Porsche (crash), No. 37 SMP Racing Oreca-Nissan (crash), No. 70 Taisan Ferrari (in the gravel twice), No. 95 Aston Martin (in the gravel), and most notably, the No. 7 Toyota stopped on track with issues. The team reported that the car suddenly lost all oil pressure.

Notable GTE Pro entry, the No. 74 Corvette, had transmission issues and the team was forced to change the gearbox after the car lost drive.

A crash by the Craft-Bamboo No. 99 Aston Martin also crashed and due to the damage the barriers sustained, officials opted to end the session 30 minutes early. Driver Fernando Rees escaped mostly unscathed with a bruised ankle being his only injury.