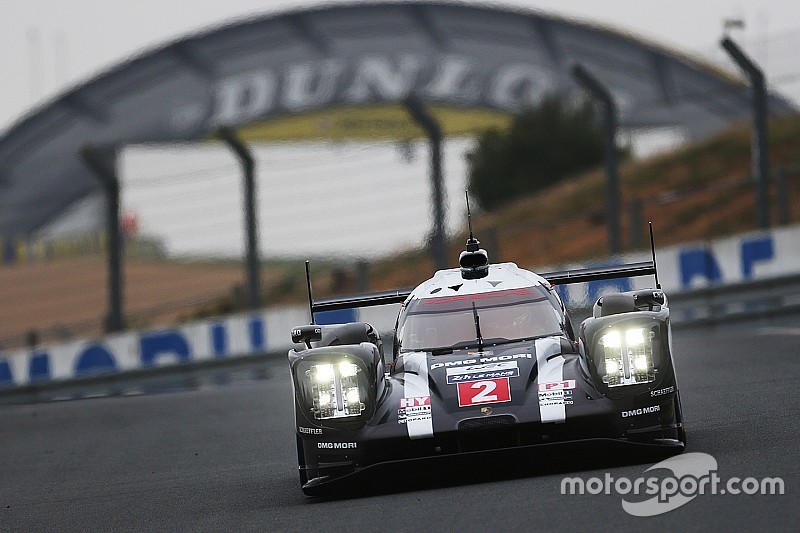 Porsche has set the fastest time in the morning session of the official test day for the Le Mans 24 Hours, as Marc Lieb posted a 3m22.334s in the third hour.

Under grey skies, the 60 entries started their on-track preparations for the 84th running of the jewel in the crown of endurance racing.

At the start of the day, the top spot on the time screens swiftly changed hands between Porsche, Audi and Toyota, with the #7 Audi R18 leading after the first hour after a 3m24.227s from Oliver Jarvis.

Porsche took command in the second hour when reigning WEC champion Mark Webber drove the #1 Porsche 919 Hybrid to a 3m22.555s, which was later bettered by Marc Lieb at the wheel of the #2 sister car.

Toyota was on the pace during the first hours of the test but ending up fifth and sixth, over eight tenths off the leading Porsche, despite running what looked like a qualifying simulation at the end of the session.

Anthony Davidson improved to a 3m23.197s with the #5 Toyota TS050 Hybrid when the chequered flag flag came out, as the sister car ended the session on a 3m23.271s at the hands of Stephane Sarrazin.

The Rebellion Racing #13 was the quickest privateer entry thanks to a 3m27.062s, beating its sister car by just one hundredth of a second on the 13.629km-long track. The ByKolles Racing Team was the last LMP1 car in ninth place, six seconds off the Rebellions.

Stephane Richelmi put Signatech Alpine on top in the LMP2 category with a 3m37.397s, but was closely followed by the #33 car of Eurasia Motorsport.

The quickest Ford GT car was the #66 of Olivier Pla, Billy Johnson and Stefan Mucke, finishing the session seventh in its class. The #55 AF Corse Ferrari driven by Duncan Cameron, Matthew Griffin and Aaron Scott, went fastest in LM GTE Am with a 3m58.869s.

Several cars had off-track excursions during the morning session.

Early in the day, Le Mans veteran Emmanuel Collard had a small off with the #83 Ferrari 458 Italia, while Sebastien Buemi had a moment with the #5 Toyota at Mulsanne corner.

Later in the session Corvette Racing driver Antonio Garcia took trip into the gravel at the end of the Mulsanne corner.

The session was shortly red flagged at 11AM when François Perrodo put his #83 Ferrari in the gravel trap at Porsche Curves.

Testing will resume at 2PM.

Webber on Le Mans chances: “We have form, pace and trust ourselves”