Porsche’s head of factory motorsport Pascal Zurlinden said he “expected to be closer” on pace to GTE Pro rivals Ferrari and Corvette in the Le Mans 24 Hours.

The Weissach marque endured a disappointing 24 hours in which it rarely matched the class leaders for the second year in a row, but finished third and fourth in GTE Pro after the second entries from Ferrari and Corvette both hit problems.

It particularly struggled for straightline speed, with both factory cars 3.4km/h down on Ferrari and 5.2 km/h down on the best figure notched by the delayed #64 Corvette.

Although the factory #92 entry of Kevin Estre, Neel Jani and Michael Christensen salvaged third, a maximum score in the double points round of the World Endurance Championship means Estre and Jani now sit 12 points behind the #51 Ferrari of Alessandro Pier Guidi and James Calado.

Porsche escaped the Balance of Performance hits handed down to Ferrari and had expected the race to be a much closer affair.

Porsche's head of WEC operations Alexander Stehlig said the marque would seek further discussion with the FIA and event organiser the Automobile Club de l'Ouest to clarify its performance deficit.

"The race wasn't only difficult, it was also disappointing for us. We had expected to fight for victory," Stehlig said.

"Despite our good and systematic preparation, we didn't have the lap-time performance and the top speed we'd hoped for compared to the competition.

"We'll now take some time to analyse everything once again with the FIA and ACO to see why we weren't quite able to match the performance of our opposition in the race."

Asked by Motorsport.com whether Porsche had anticipated its deficit, Zurlinden said: "Definitely we would have expected to be closer, we have to analyse it." 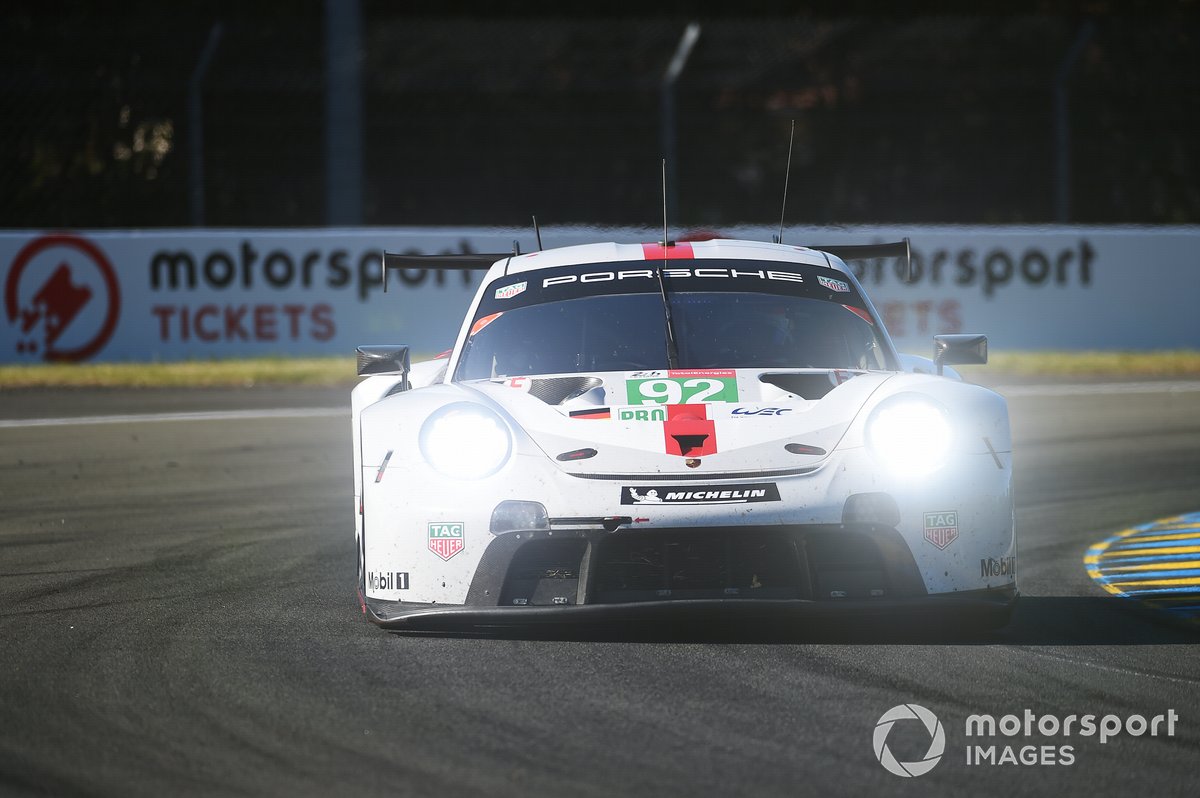 Richard Lietz, who shared the #91 entry that finished fourth with Gianmaria Bruni and Fred Makowiecki, said the "painful" performance was "not good enough".

"If you don't have any punctures at Le Mans, if the team does a flawless job, if you implement a good strategy and then only finish on third and fourth, then you have to take a good look at things," he said.

"This result is not good enough. Anyone who watched the race knows that it was a painful 24 hours for us. Now we have to look at why."

Elaborating on where the race got away from the team, Zurlinden cited Estre's lap four spin that dropped him into the GTE Am pack and the timing of a safety car just before midnight to recover Rui Andrade's crashed LMP2 Aurus at the Dunlop Curve which split both Porsches behind a different train than the leaders.

Jani had been in the lead group when a badly-timed full course yellow coincided with its seventh stop – the rules stipulating that only a five-second fill is allowed – which required the Swiss to pit again two laps later for the full complement.

"I would say there was two crucial moments," said Zurlinden. "One was the spin of Kevin, because at the end we saw probably our deficient in straight-line performance, he was struggling going through the Am cars.

"And then I think at one point we had a safety car which also splitted him. He was in the first group, then the safety car came and he found himself with #91 of the second group which means he lost 1/3 of a lap and this is always difficult to get back.

"You need to be a bit lucky with slow zones and with still other safety cars, like the last years. Sometimes it's positive for yourself, sometimes it's negative.

"I would say one was the spin at the beginning, the second moment was before midnight the safety car which split the GTE class."

Alpine has "no reason to be disappointed" with Le Mans podium