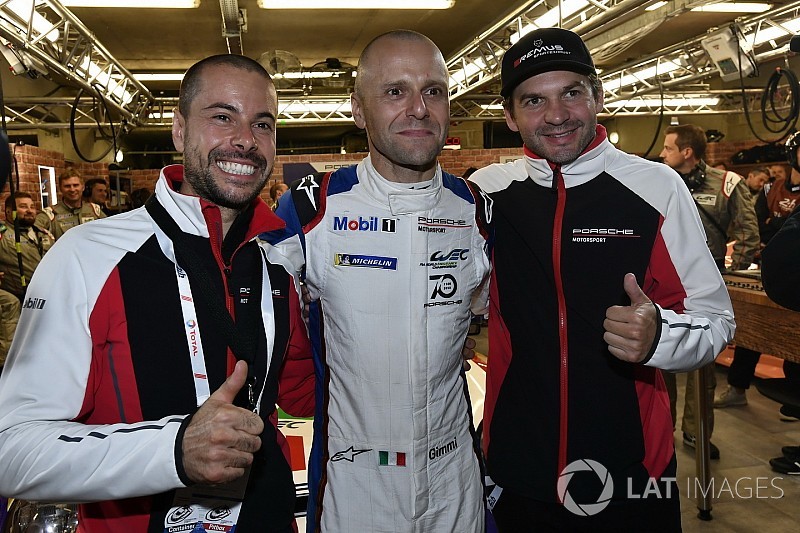 Pascal Zurlinden, Porsche's director of GT motorsport, explained that the Italian driver's 3m47.504s lap aboard the Rothmans-liveried #91 car was aided by a series of perfect tows in the slipstream of other cars.

"We went for it in qualifying and got lucky with a series of tows on the straights," he told Motorsport.com. "They were worth one to 1.5 seconds, so a 3m48.5s or a 3m49.0s is a more realistic time.

"That means the other manufacturers aren't far behind and we don't know if they really went for it like we did. We don't think qualifying is over yet."

Bruni's lap compared with Michael Christensen's 3m49.097s in #92 Manthey-run Porsche, which was less than a tenth up on best of the Ganassi Ford GTs qualified on a 3m49.181s by Olivier Pla.

Zurlinden also pointed out that that best theoretical lap by a factory AF Corse Ferrari 488 GTE was quicker than the 3m49.854s that Alessandro Pier Guidi posted to take fifth in the provisional times for the Italian marque in yesterday's opening qualifying session.

Only Aston Martin was further back with its new second-generation Vantage GTE, despite a Balance of Performance change in its favour earlier in the week.

Bruni described his lap as perfect, but admitted that his attempt to go faster next time around resulted in his spin at the Dunlop Curve that curtailed the #91 car's session.

"I tried to take it flat, but I took a little too much kerb on the inside," he said.

A flat-spotted right front tyre deflated in the spin, which explained why he did not attempt to return to the pits.

Zurlinden said that the Bruni and teammates Richard Lietz and Frederick Makowiecki would concentrate on race preparations in second qualifying tonight after missing nearly two hours of running.

But he revealed that the two factory Porsches run by the CORE autosport IMSA team would likely try to improve their times after ending up sixth and seventh.

"With 17 cars in the class, you don't want to be too far back on the grid, because a safety car or slow zone could really cost you," he said.