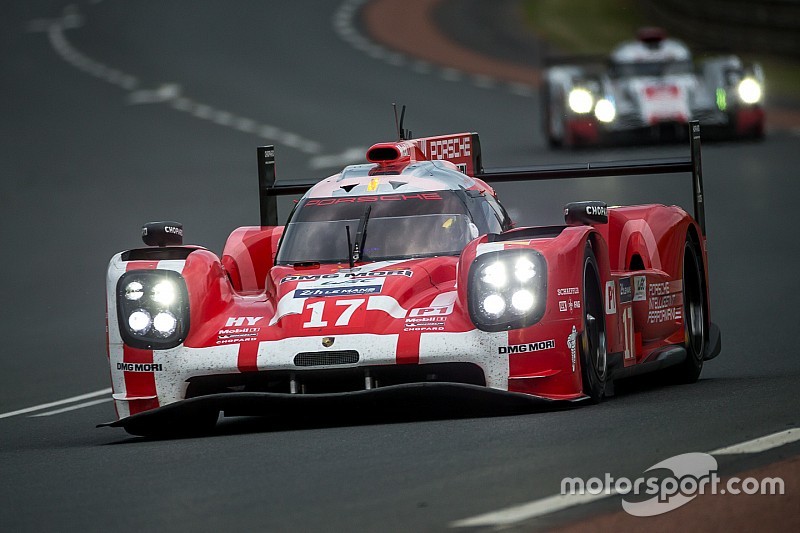 Starting drivers on Saturday will be Timo Bernhard, Neel Jani and Nico Hülkenberg.

Stuttgart - On Saturday at 3pm the Porsche Team will start the 83rd Le Mans 24-Hours from one, two and three on the grid. This is the 17th pole position for Porsche in Le Mans, and prior to this the most recent one dates back to 1997. Furthermore it is the ninth time since 1968 that three Porsche race cars have locked out the front of the grid for the Le Mans 24-Hours with a one-two-three. This happened last in 1988.

Finishing first, second and third in qualifying at what is only our second attempt in Le Mans is outstanding.

Switzerland’s Neel Jani did his fastest lap time during the first qualifying session on Wednesday night and, despite dry conditions in both qualifying sessions on Thursday, it remained unbeaten. With his lap of 3:16.887 minutes, he has set a new qualifying record for the current track length of 13.629 kilometres by beating Peugeot’s pole position time from 2008 (3:18.513 min). Timo Bernhard (GER) was second fastest on Wednesday and his time of 3:17.767 minutes was also good enough to beat the old record. In the third Porsche LMP1 Nick Tandy (GBR) improved his lap time in Q2 on Thursday to 3:18.862 minutes and claimed P3.

Starting drivers on Saturday will be Timo Bernhard, Neel Jani and Nico Hülkenberg.

The three Porsche 919 Hybrids are the most innovative in the 56 car field and carry future technology for Porsche’s road going sports cars. The revolutionary technical regulations’ focus on efficiency for class 1 Le Mans prototypes (LMP1) attracted Porsche in 2014 to return to top level motorsport. The combination of a two-litre, V4 turbo charged and petrol fuelled engine with two energy recovery systems (brake energy and exhaust energy) produces a power system of around 1000 HP.

Quotes after the third and final qualifying

Wolfgang Hatz, Board Member Research and Development Porsche AG: “Claiming first, second and third is obviously a perfect qualifying result. Nevertheless, today we have worked a lot for the race and were quite good on longer runs on used tyres. I have told everybody not to look at the competition but to focus on maximising our package. The technicians, engineers and drivers – the entire team worked directly in the same direction and did a fabulous job. The result is a real pleasure and makes me proud of the team. I’m very much looking forward to the race.”

Fritz Enzinger, Vice President LMP1: “Finishing first, second and third in qualifying at what is only our second attempt in Le Mans is outstanding. A big thank you to the team at the track and back at the factory in Weissach. We are still a very young team and every bit of success is important. This result helps us to start the race full of confidence. It will be a hard race with tough competition, but we are looking forward to it.”

Alexander Hitzinger, Technical Director LMP1: “I’m over the moon and want to express my compliments to the development team of this race car. The qualifying result is a reward for three years of very, very hard work. Now we have to prove that we have built not only a fast car, but also a reliable one. Also we would be wrong to think the difference in the lap times could be as big in the race as in qualifying. We cannot underestimate the competition.”

Andreas Seidl, Team Principal: “This great qualifying result is an important first part in our success. But looking forward to the race it is even more important that today we had a productive day of preparation. We have had consistently dry track conditions and went through our tyre programme as planned. We also had race components on the cars. The team and the drivers have done a top job.”

Audi ready for the 24 Hours of Le Mans