Ready For 24 Hours Of Intense Racing!

With just five tenths separating the top six cars, the qualifying sessions have already ensured this 79th edition of the 24 Hours of Le Mans will take its place in the annals. The battle for pole position was exciting and closely contested in all three sessions, leaving the outcome of this weekend's race hard to predict. On Saturday, the Peugeot 908 no.9 will line up in third position on the starting grid, just in front of the no.8 car, whilst the no.7 car will start from sixth position.

Le Mans is above all about reliability, good pit stops, and a question of fuel consumption and strategy. The race is going to be extremely testing.

Suspense all the way

The second day of qualifying began in similar fashion to the first day. The Peugeot drivers calmly completed their race preparations by comparing the various mechanical and aerodynamic configurations. Stéphane Sarrazin and Marc Gené then picked up the pace, whilst the driver team of car no.9 (Bourdais, Lamy and Pagenaud) remained focussed on its development programme.

The no.8 (Sarrazin) and no.7 (Gené) cars took it in turns to hold provisional pole position at the end of the second qualifying session. The much sought-after pole was snatched at the death by Marcel Fassler.


The timesheets changed again in the final qualifying session until Simon Pagenaud, credited with fastest time of the Peugeots with 3’26’’010, was stopped in his tracks by a puncture on his final attempt to grab pole. Franck Montagny, Nicolas Minassian and Stéphane Sarrazin’s no.8 car will start from fourth and the no.7 car (Davidson, Gené and Wurz) will line up in sixth place. The leading private car, Oreca Matmut team’s Peugeot 908 HDi FAP will line up in 7th position on the starting grid.

With just five tenths separating the top six cars, the 250,000 spectators expected at Le Mans and the hundreds of millions of TV viewers and web users who will be following the event should prepare for 24 hours of breathtakingly exciting and action-packed racing. 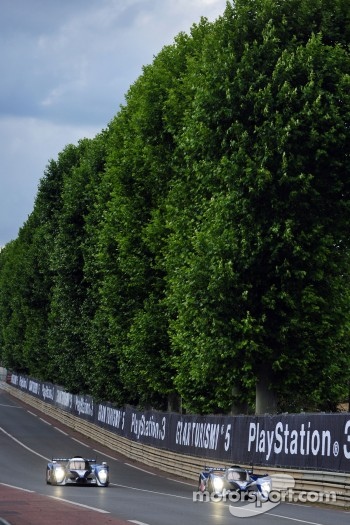 
Olivier Quesnel, Peugeot Sport Director: “The number 7 and 8 cars both spent time at the top of the timesheets and the number 9 car came close to grabbing pole at the end of the session. So, all three of our cars has their chances during these incredibly closely contested qualifying sessions. Our drivers did a great job and are happy with the set-up of their cars. It’s quite staggering that after six hours of qualifying, there are six cars separated by just five tenths on a track that is over 13 kilometres! With fifty six cars on the track, it's the traffic that has the biggest say in who claims pole position. We put on a fantastic show, whilst also completing our working programme, in terms of tyres and set-up. We had no problems at all. Everyone watching has been focussed on the performances of the cars during these exciting qualifying sessions but now we now have 24 Hours of racing to take part in! Le Mans is above all about reliability, good pit stops, and a question of fuel consumption and strategy. The race is going to be extremely testing.""