Perrinn prototype to be powered by Formula E motors 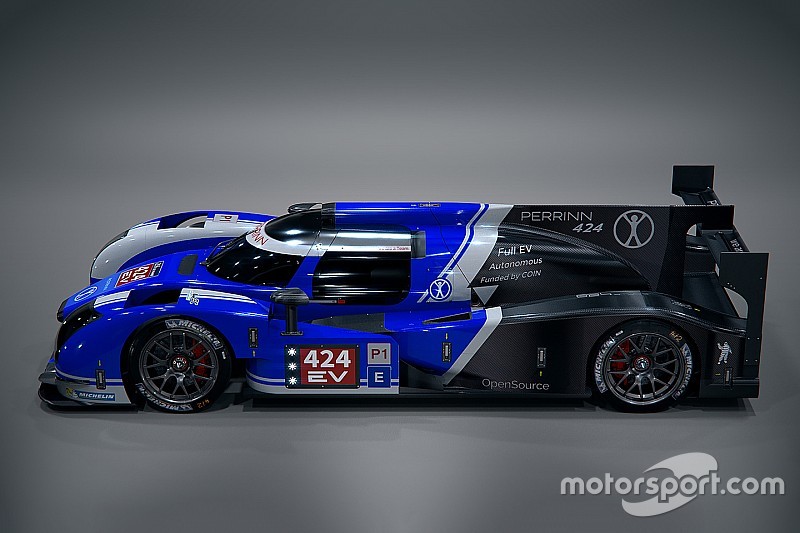 The Perrinn prototype billed as the world's fastest electric racing car will be powered by three Formula E motors.

The British constructor, which has ambitions to take an all-electric car to the Le Mans 24 Hours, has agreed a deal with an undisclosed FE powertrain supplier to provide the motors for its LMP1-based 424 prototype.

The motors, two powering the rear axle and one the front, will give the 424 a power output of 750kw, equivalent to just over 1000bhp.

Marque founder Nicolas Perrin told Motorsport.com: "We have agree a deal with one of the existing FE suppliers to use its season four [2017/18] powertrain, but we can't say which one until the business plan is in place.

"The FE motors are limited by regulation to 200kW, but they can go higher and we will be using them to their full capacity, which gives us the 750kW or 1000bhp."

The Yorkshire-based team will buy off-the-shelf battery cells to assemble its own batteries, arranged in nine modules each containing 64 cells.

Perrin, a former Williams Formula 1 design and race engineer, is now working to raise the £2 million to build the 424 and undertake initial testing.

He is confident that he can have the car up and running six months after the build process begins.

Perrin believes a car that will weigh in at 1200kg, 330kg more than a hybrid P1 contender, can achieve lap times between those of LMP1 and P2.

The aim is to use the 424 as a test bed for future developments in electric-vehicle technology, leading up to a Le Mans assault in the first half of the next decade.

The Perrinn, which was conceived as a privateer LMP1 contender, has been substantially redesigned for the all-electric application.

"The philosophy is the same, but we had re-thought the whole car around the integration of the batteries and there are a lot of detail differences," he said.

The car is 200mm longer than the maximum allowed in LMP1 to accommodate the batteries, which will have a total weight of 400kg.

These will be integrated within the monocoque, as will be the case in the second-generation Spark/Dallara FE car for season five.

"We originally thought about bolting the batteries on the back of the chassis, but what we have come up with is a much neater way of doing it," explained Perrin.

Perrin believes that technological advances could allow an all-electric prototype to race at Le Mans without the need to change batteries "within four to five years".

"Our plan is to build a new car every year to incorporate advances in battery and charging technology," he said.

Don Panoz's Green4U electric car will undergo a change of battery at each pitstop should it land the 'Garage 56' grid slot for an experiment at Le Mans in 2019.