The three ORECA 03s taking part in the 79th edition of the 24 Hours of Le Mans obtained a solid result during qualifying. For its debut at La Sarthe, the prototype designed and built in Signes came away with the pole position in LMP2 thanks to the Signatech-Nissan team with Soheil Ayari behind the wheel.

It’s a real joy to be at Le Mans with such a competitive car.

Current leaders in the Intercontinental Le Mans Cup, the Signatech-Nissan team confirmed the performance of the #26 ORECA 03 with pole. Soheil Ayari signed the fastest lap shortly before the end of the second qualifying session. The night before, Franck Mailleux, who was the fastest driver of the three, had the second quickest lap in LMP2.

With a time of 3 :41.458, the Aix native was over a second faster than his closest rival. "This is my 10th Le Mans 24 Hours and it’s a great satisfaction for me. The car is handling very well and we fine-tuned the settings for the race. The ORECA 03 is easy to drive with a perfect balance. It’s a real joy to be at Le Mans with such a competitive car."

The Philippe Sinault-led team will aim to confirm this good result for the race, facing stiff competition : "Everything has come together for us to do well. The HPD engined cars have improved, as did those with Judd engines. The competition is there." The Strakka Racing HPD ARX-01d had the second fastest time, just ahead of another ORECA 03, the Team ORECA-Matmut entry driven by Prémat/ Hallyday/Kraihamer

Race Performance completed 40 laps during the second day of qualifying, with the seventh fastest time in hand for the Meichtry/Rostan/Frey trio. Perennial participant here at Le Mans, Marc Rostan speaks of the various settings : "On the first day we didn’t encounter the slightest problem on the car. The next day, we had an engine issue that slowed our shedule. The team is planning on adopting a pace under 3 :50 a lap during the race."

Among the three men, only Michel Frey is making his debut in La Sarthe : "Michel drove well, but you have to say that the ORECA 03 is really good to drive. The chassis is incredible. We didn’t plan on risking everything for a quick time, but instead to concentrate on the race."

"I’m very happy to see the Signatech-Nissan ORECA 03 on pole," declared Hugues de Chaunac, President of Groupe ORECA. "Soheil Ayari had a very good qualifying session and all of the ORECA 03s ran well. This car has already shown its performance level. It will have to be reliable in order to shine during these 24 Hours of Le Mans." 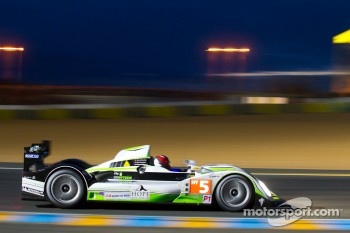 For its racing debut, the ORECA SWISS HY TECH-Hybrid from Swiss team Hope Racing, showed good potential. Until now, the car had only be tested a few times. These 24 Hours of Le Mans are therefore a baptism by fire for Benoît Morand’s team. During the sessions, Steve Zacchia, Jan Lammers and Casper Elgaard accumulated mileage as Steve Zacchia points out : "On Wednesday we covered almost 800 km without the slightest problem. The car is working well and the chassis is very good. Before coming here, we had only tested for two days, which did us well. For the race, the goal will be to finish and particularly to gather a maximum of information for the future."

"It’s very encouraging for the future," notes the Swiss driver. "We didn’t go after pure performance, but concentrated above all else on reliability for the race." The ORECA SWISS HY TECH-Hybrid qualified in 24th place with more than 100 laps under the belt.

The drivers will now take advantage of a rest day, a part of which is dedicated to the traditional Drivers’ Parade in downtown Le Mans. There will remain only one more chance for practice with the warm up on Saturday morning before the start of the 24 Hours of Le Mans 2011 at 3p.m.