Strakka has a strong record at Le Mans, winning the LMP2 category in 2010 and finished 5th overall – the highest ever finishing position for an LMP2 car. 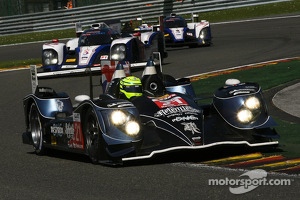 With the majority of the 8.468 mile (13.629km) Circuit de la Sarthe used by normal traffic since last year’s race, the grime from everyday lorry and car use, combined with often heavy rain, reduced grip levels significantly, contributing to a number of accidents and incidents.

A minor spin during a heavier downpour was Strakka’s only hiccup in an otherwise encouraging eight-hour test session. As conditions dried for the final 90 minutes, Strakka set a 9th fastest 3:35.631 best time.

Strakka has a strong record at Le Mans, winning the LMP2 category in 2010 and finished 5th overall – the highest ever finishing position for an LMP2 car. This year, the Silverstone-based team races in the premier LMP1 class against the might of Audi and Toyota, with its primary target of challenging for victory in the LMP1 Privateers’ category.

Despite it being a small privateer team, Strakka Racing has one of the strongest and most experienced driver line-ups at Le Mans this year – with a total of 19 starts between them. It also has team consistency, as this will be the fourth consecutive year that Nick, Danny and Jonny have raced together with Strakka Racing at Le Mans.

This constancy gives each driver a great depth of understanding and knowledge of each other’s strengths and personalities, as they share the 200mph HPD ARX-03c.

This will be Jonny’s tenth appearance at Le Mans, having made his debut driving an MG Lola EX 257 in 2001. The 40-year old former McLaren Autosport Young Driver of the Year award winner (1995) and British Formula 3 champion (1997) has only finished the Le Mans 24 Hours three times – twice with Strakka Racing in the last three years. His speed and race craft makes him the natural choice to start the Le Mans race.

Danny made his Le Mans 24 Hour debut in 2007 with Team LNT Panoz, and has contested the race five times. The 33-year old former Formula Renault champion (2002) was the first British driver to be signed to the Renault Formula 1 Driver Development Programme, and is now established as one of the fastest endurance racing drivers on the grid and especially recognised for his outstanding speed in qualifying.

Nick is the only sportsman driver in the LMP1 field, and has dedicated the last nine years to becoming as quick as the world’s top professional endurance racing drivers. The 33-year old only started racing in 2004, after a back injury forced him to abandon a promising downhill ski racing career.

In such a short space of time, Nick has contested the Le Mans 24 Hours five times. He made his Le Mans debut in 2008 in an Aston Martin DBR9 GT1 and returned the following year in a Ginetta-Zytek GZ09S-04, finishing 14th in LMP1.

A total of 168 drivers (including 10 former outright winners) in 56 cars will contest this year’s 90th anniversary running of the Le Mans 24 Hours.

The blue-riband long-distance race hosts Round 3 of the FIA World Endurance Championship, where Strakka Racing is aiming to score maximum double points in its quest to become LMP1 Privateer world champions.

Nick Leventis: “It’s great to be back at Le Mans – I love racing here and can’t wait for the event to start. It’s been a very wet and tricky test, but we’ve worked through our programme and everything’s gone really well. It was beneficial to get some dry laps done in the afternoon, as we have some good data in both conditions and have a very good feel for where the car is now and how we can improve it between now and the start of the race.

Historically, our low-drag kit has always worked well at Le Mans; on the LMP2 car it was very quick and there’s no reason why it won’t be fast on our P1 car this year. We’re confident that our car will be pretty competitive once again this year.”

Danny Watts: “It’s fantastic to be back at Le Mans, because it’s one of my favourite races of the year. It’s a massively challenging circuit in the dry, let alone in the wet like it has been for most of today. It was a case of driving to the conditions and having a little bit in reserve to get through everything we wanted to test, because nobody was going to win the Le Mans 24 Hours today.

It’s just a case of the engineers gathering data and information on the car and for us drivers to get back into it. The new low-drag aero package is good; it was difficult to judge it in the wet, because we’re coming onto the straights a lot slower because our corner speeds are reduced, but in the dry the car felt very well balanced indeed. We’ve gathered a lot of useful information today, but don’t look too much into the lap times.”

Jonny Kane: “The car felt really good and the new low-drag aero package seems to be working very well. The roads have been used by normal traffic for a whole year since the last Le Mans event, so there wasn’t an awful lot of grip to start off with. In addition to all the water, the track was dirty, so conditions were very tricky early on.

The balance of the car feels very good, it was a real benefit to get some dry running in towards the end of the test, and we’ll return to Le Mans next week with a very strong base on which to build. Today was all about getting Danny, Nick and myself back into the car again, back into Le Mans mode, comfortable with the track and things like that – you don’t get any prizes for lap times today.”

Dan Walmsley, Strakka Racing Team Manager: “This has been a very productive test session for us. Despite the tricky track conditions, we’ve achieved everything we set out to do, worked through our pre-planned test programme and now we’re all looking forward to returning for the big event itself. It’s always a privilege for the team to compete at the Le Mans 24 Hours – one of the blue-riband events of motorsport and specifically the FIA World Endurance Championship.

We love racing at La Sarthe and historically have presented a fast car. The racing is absolutely relentless for twenty-four hours and no single member of the team can lose focus – that’s what makes this such a galvanising event for all the competitors. A lot of British fans will be making the pilgrimage to Le Mans, and we hope not to disappoint them!”

Strakka Racing will return to the Le Mans track for official free practice and qualifying (19-20 June), before the start of the race at 15.00 Saturday 22 June.

Nissan next 'lounge to Le Mans' star ready to race