Of Tie fighters, light and trees: the story of an award-winning photo

Winning is not everything, but it surely is heart-warming. So here it is…

The Sarthe Endurance Photos is a highly regarded photography competition held every year, in which professional (and amateurs) photographers shooting at the 24 Hours of Le Mans as well as in different ILMC races can enter up to three of their very best shots. And this year, I took the first prize award. Now here's the whole story…

Last year I already had the honor of winning the third place prize in the same competition for a photo shot at Le Mans in 2010. This year, with even more entries, as well as spectacular shots (including the now infamous early race crash) and without the most beautiful eyes in the world to help me in my quest for the perfect shot, I thought my chances were slim. But nooooo, looks like I was wrong and things got even better this year!

Winning the "Sarthe Endurance Photos" competition is obviously a huge honor for me, for many different reasons. First: the 24 Hours of Le Mans is my favorite race of the year, and I suspect the favorite race of many top racing photographers around the world. They (well, we) all know how great Le Mans is and how incredibly photogenic this event can be, and the very best of those sharp shooters show up every year in La Sarthe. So a first place award in this level of competition certainly means a lot to me (to say the least).

This race has an amazingly rich history and being a part (even small) of documenting it in story-telling images is already a joy and honor. Shooting Le Mans is shooting history. For one thing, the track itself is simply magic, most of it being in a natural environment that has not changed that much since the early days, with the same legendary curves and landmarks that have made it legendary: Tertre Rouge, Les Hunaudières, Mulsanne, Arnage, Porsche curve, etc. All these names breathe history.

Secondly, the cars: in no other race in the world can one find such a variety of machinery. From closed and open cockpit high-tech prototypes to rear and front-engine GTs, the wide variety of cars entered at Le Mans is staggering and mouth-watering for any 'lover' of beautiful automobiles (most of us photographers are).

Finally, the race (should I say, the 'event') itself: one cannot imagine what Le Mans has become in the past 5-6 years. It is no longer a typical endurance race anymore, but a 24-hour Grand Prix (with its non-stop fast pace) or a 24-hour NASCAR race (with spectacular wheel-to-wheel racing, crashes and upsets). Just think that in 2010, the winners covered a distance equivalent of driving from Florida to Alaska in a mere 24 hours, at a speed almost on par with the fastest Grand Prix of the season. Faster than Grand Prix racing, but twice around the clock. In sort, it is a brutal race for drivers and teams… But also for photographers. There is so many things to cover and shoot that you just don't want to go to sleep, even for 30 minutes. You have to get it all.

As a photographer, one of those things you 'have to get' is the Saturday morning warmup. Already tired because you just spent a full week shooting practice, qualifying and the Friday night drivers parade, the most brutal is yet to come. And it starts early on Saturday morning.

For the Saturday morning warmup, if the light is good, I usually like to venture out in the forest, between Mulsanne and Indianapolis corners. I like the fact that when I go there in the morning, I'm by myself with no one around, except a few course marshals a few hundred meters away.

On that glorious Saturday morning of June 11, 2011, I once again decided to oblige to my tradition and drove the quick 5 minutes it takes for me to get there (another plus for me: my 'Le Mans house' is a mere 5 minutes away :-), and walked about 10 minutes in the forest to finally reach my final shooting destination.

The rest was priceless: shortly after 9AM, the horde was unleashed, several kilometers away and the silence of the forest was broken by a wall of sound irrevocably approaching from deep in the woods. They were coming, and they were coming fast: I could hear them racing on the Hunaudières straight, and by the time they downshifted at the second chicane, I was fully aware that I had to get ready to shoot this first lap out (always the most spectacular) and my right index was now sitting on the shutter button. As they exited Mulsanne, and screaming towards the first kink, it was now showtime for me and as luck (and tradition) would have it, the first car to show up was the pole winning #2 Audi, followed closely by its sister car. At this exact moment, I shot what would become the first prize award of the Sarthe Endurance Photos competition. 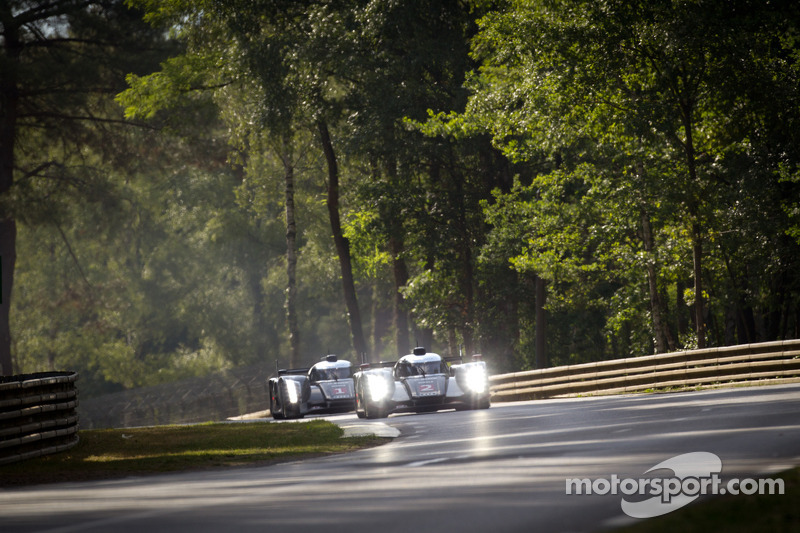 I remember that precise moment with fond memories and even wrote immediately after (on my Facebook page): "If Darth Vader was a race car driver, no doubt he would drive an Audi R18 TDI. Seeing a pair of them deep in the Le Mans forest (which itself looks like the forest moon of Endor) coming straight at me at more than 300 kph was almost a scary experience." It was that eerie.

Generally speaking, the 24 Hours of Le Mans is the best lit race of the year. On any sunny day, June in the Loire region brings to best light one can find. The days are long (close to the summer solstice) and the nights are short. The 'good' evening light starts at 6PM and seem to last forever until 10PM (and beyond). Morning light is also a 4-hour deal. As a photographer, it really is difficult to ask for more than an 18-hour day and 8 hours of 'perfect' light. 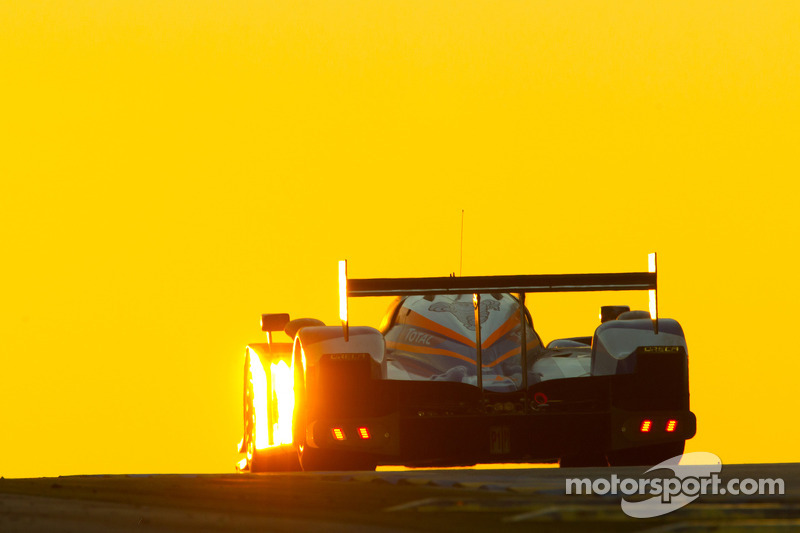 This specific shot is no exception: for years, I've heard everybody telling me that in the morning, going there was insane since it's backlit. Well, it isn't. At least those trees before the first kink are not, and those trees and their amazing texture lit by the sun is what I come here to shoot. I love this shot and it is one of the most 'authentic' and true to the traditional spirit of Le Mans.

Those trees are just majestic. The same can be said about those trees on the Hunaudières (aka Mulsanne) Straight, starting with those massive plane trees exiting Tertre Rouge. Those trees are a major part of the Le Mans 'look and feel'. Here's my small message to the ACO: please take good care of them. They make the track unique, as much as the landmarks and houses that surround it. 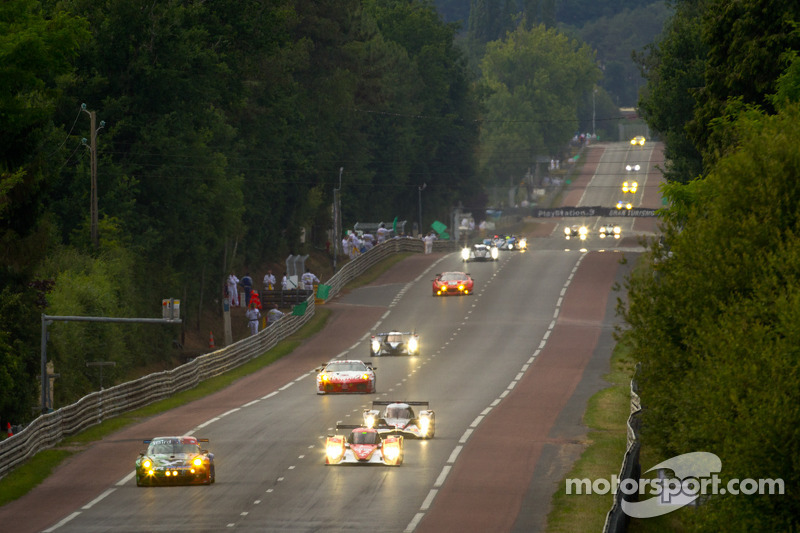 A pack of cars race down Hunaudières straight

Eric Gilbert, getting ready to shoot the Saturday morning warmup, moments away from shooting the award-winning shot, part 1

Eric Gilbert, getting ready to shoot the Saturday morning warmup, moments away from shooting the award-winning shot, part 2

It's been a blast Peugeot

Buemi to race Le Mans with Toyota in 2012 - report