Mowlem, who has raced eight times in the famous French endurance event, joins Tony Burgess and Jonathan Hirschi in HVM Status GP’s Lola-Judd B12/80 Coupe, which competes in the LMP2 class.

Mowlem is the current leader of the European Le Mans Series GTE class in his RAM Racing Ferrari after winning in the second round at Imola earlier this month.

HVM Status GP made its first endurance race start of the 2013 season in the Imola race, with Burgess and Hirschi driving as part of the team's Le Mans preparations.

Mowlem has co-driven both Burgess and Hirschi before. He linked up with Canadian Burgess in an LMP1 Lola in the 2010 American Le Mans Series, with the duo finishing third at Mosport. Mowlem also shared a factory Lotus GTE with Hirschi in the 2011 ILMC Championship. 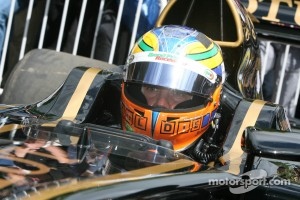 “I’m absolutely delighted to be joining HVM Status GP,” said Mowlem, “especially as it’s rare to get a top-line Le Mans drive this late in the day. But we’ve been in touch for a while and I’m very happy the deal has come off.

“We know what our strengths are and we will play to them. Le Mans is a race where it’s very important to stay out of trouble. If we can run reliably at a strong race pace then we have a good chance of a class podium.

“We have the Le Mans Test Day and of course the week of the race to prepare. I’m confident that by the time of the race we’ll be in good shape for a strong performance.”

The Le Mans Test Day takes place on June 9, with race week beginning with free practice on June 19. Qualifying is on June 20, and the big race takes place over June 22-23.

How did the drive with HVM Status GP come about? “I’ve been friends with the team’s commercial director, Tim Scott, for a long time. We came very close to getting together last year, and always kept in touch. Then I met team principal Teddy Yip Jr and managing director David Kennedy towards the end of 2012 and we got on well. I said I’d love to be a part of it.”

You’ve spent a lot of time racing against Tony Burgess in the American Le Mans Series. Did this help the process?

“We’ve always been friendly. He asked me in 2010 if I would like to race the Autocon Lola in the ALMS. I led the first hour of the race at Road America and then at Mosport we finished third overall. Tony and I get on really well outside the car and we work well together as well when it comes to competition.”

You have also raced with Jonathan Hirschi. Do you have a good relationship? “Yes, I shared a factory Lotus Evora GTE with him for two thirds of a season and we get on really well. He’s a good guy and will be a good man to have in the team.”

You’ve not raced a sports-prototype at Le Mans since you drove the Creation in 2009. Are you confident of getting up to speed quickly? “I haven’t driven the HVM Status GP Lola yet, and I haven’t driven that exact model of Lola, but I have raced the Dyson Racing LMP1 version last season and I have plenty of recent prototype experience. I’m sure I can get back into the rhythm quickly and it will help having good team-mates.”

Scott Tucker and Level 5 getting to Le Mans