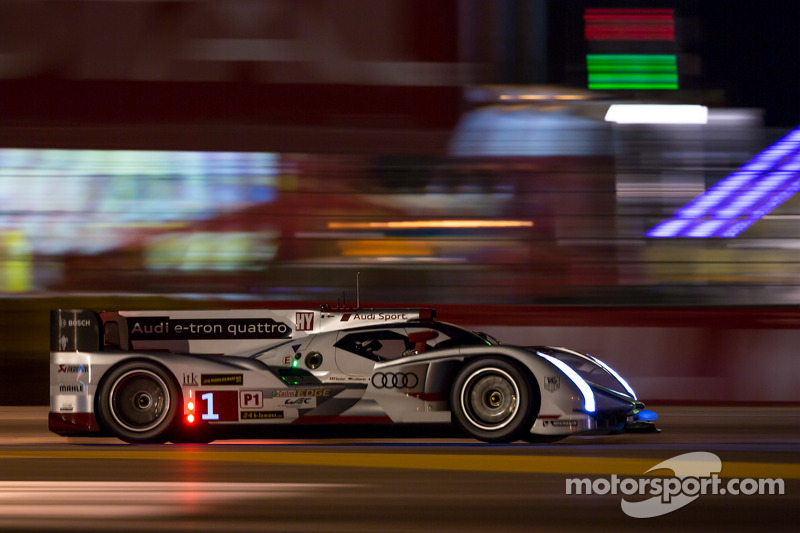 Weekend celebrations for Audi at Le Mans has been dampened by recent deaths in the racing world.

Le Mans, France – At the 90th running of the Le Mans 24 Hours, Audi was a protagonist not only on the race track. Around the ‘Circuit des 24 Heures,’ the most famous endurance race of the world was under the symbol of the four rings as well. The anniversary has been clouded by sad news on Saturday afternoon.

Two tragic deaths clouded the mood at Audi on Saturday: At Le Mans, Aston Martin driver Allan Simonsen succumbed to the injuries he sustained in a serious accident shortly after the start. At the VLN race on the Nürburgring-Nordschleife, ‘Wolf Silvester’ died at the wheel of an Opel Astra presumably due to health problems. Both drivers had also contested races in the Audi R8 LMS. Audi Sport and Audi Sport customer racing are deeply saddened by the two deaths. The Audi motorsport family extends its sympathy primarily to the family members of the two deceased.

On the occasion of the 90th anniversary of the Le Mans 24 Hours, Audi handed the 2012 FIA World Endurance Championship winning Audi R18 e-tron quattro over to the Automobile Club de l’Ouest (ACO). The car will be exhibited in the museum located alongside the Le Mans race track. During the traditional Audi press conference, Head of Audi Motorsport Dr. Wolfgang Ullrich symbolically presented ACO President Pierre Fillon with the steering wheel of the hybrid race car. 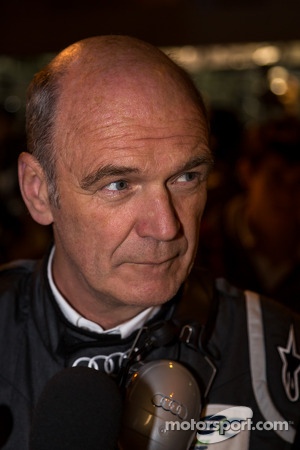 A great honor for Dr. Wolfgang Ullrich: A square has been named after the Head of Audi Motorsport in the center of Saint Saturnin. The small suburb of Le Mans has traditionally been the hub for fans traveling to the event from Great Britain. Mayor Bruno Jannin and Stéphane Auvrignon, President of the ‘Classic British Welcome,’ unveiled the ‘Place Dr Wolfgang Ullrich’ on Friday in the presence of the Head of Audi Sport, who was visibly moved.

“I’m totally surprised to receive such an honor,” said the native Austrian. “Although I’ve been to Le Mans so many times I didn’t know Saturnin and this impressive event. This is another place where you can really feel how much the region ‘lives’ the Le Mans 24 Hours.”

It has become a cherished tradition: On the Friday before the race at Le Mans, Tom Kristensen together with his team-mates visits the biggest camp with Danish fans along the track. More than 3,000 of his compatriots camp at Le Mans for the whole race week and back the record winner with resounding rounds of cheer. Whereas Allan McNish has been familiar with the spectacle for years, Kristensen’s new team-mate Loïc Duval now experienced his Danish premiere – and was visibly impressed with the enthusiasm of the Scandinavians. 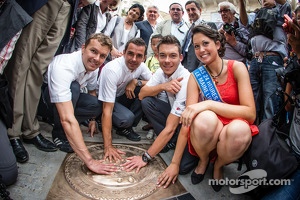 Newcomer Jamie Green is gelling more and more with the Audi family. After having scored his first DTM points at the Lausitzring, the Briton traveled to Le Mans on Thursday to keep his fingers crossed for the Audi Sport squad on location. It was the first race week at Le Mans that Green experienced. “It’s fascinating to see Audi’s presence here at Le Mans – both in a sporting sense in the pits and in terms of the offering that is available to the guests and journalists.” Green watched the crucial qualifying session for the pole position in the garage of Audi Sport Team Joest. Allan McNish showed him around the Audi R18 e-tron quattro.

Before the start of the 24-hour race at Le Mans, the multiple Le Mans winners Frank Biela and Dindo Capello did demo laps in an Audi R10 TDI and an Audi R18 e-tron quattro. The two LMP1 sports cars from Ingolstadt and Neckarsulm had been voted as being among the most legendary race cars in Le Mans history on the occasion of the classic endurance race. With the R10 TDI Audi achieved the first victory of a diesel sports car at Le Mans in 2006 and with the R18 e-tron quattro the first triumph of a hybrid race car last year.

Audi extended a particularly warm welcome to its fan community at this year’s Le Mans 24 Hours. At the Audi Fan Area alongside the first chicane after the start and finish, the brand’s followers could enjoy a view of a spectacular track section. And those who have always been eager to discover the secrets of the Audi R18 e-tron quattro could satisfy their curiosity by taking a close look at the cross-section of the Audi R18 e-tron quattro. Xbox racing simulators gave the most avid fans the opportunity to qualify for a race against an Audi Le Mans legend on Sunday morning by setting fast lap times. Other successful names in motorsport kept dropping by the Fan Area for meet-and-greet sessions. Furthermore, Audi posters and T-shirts were available at the Fan Counter. A live DJ provided musical entertainment.

Almost exactly 30 years ago, Dr. Christian John was deployed as Audi Sport’s team doctor for the first time – from June 25 to 28 at the New Zealand Rally. Back then and today Audi battles for world championship titles around the globe, back then and today the squad from Ingolstadt and Neckarsulm relies on the skills of the trained surgeon, trauma surgeon and expert for naturopathy. The race drivers are not the only ones benefiting from the physician’s wealth of experience. At the 2013 Le Mans 24 Hours, the 67-year-old doctor headed a five-member team that took care of the health of all employees and provided nutritional tips to the mechanics as well. “The main focus has always been placed on the fitness of our drivers,” emphasizes Dr. Christian John. “But now we’re offering comprehensive healthcare to our pit crews too, which includes thorough prevention with nutritional advice because at the pit stops seconds are crucial as well.” 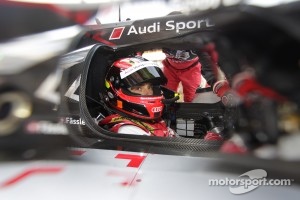 This year, Audi’s tire partner Michelin again generously rewarded the winners of the Le Mans 24 Hours from the previous year. Marcel Fässler and Benoît Tréluyer each received a fully equipped mobile tool chest. André Lotterer will be off-roading on a Polaris RZR Quad.

Just before the start of the Le Mans 24 Hours on Saturday, Dr. Wolfgang Ullrich greeted two members of the French government. At the Audi garages, the Head of Audi Motorsport welcomed Valérie Fourneyron, Minister for Sport and Youth, and Stéphane Le Foll, Minister for Agriculture and Forestry.

Dr. Wolfgang Ullrich received a gift at the traditional interview session following Technical Scrutineering at Le Mans. MC Bruno Vandestick presented a diorama with the signatures of all nine factory sports car drivers to the Head of Audi Motorsport on the occasion of his 20th anniversary of service this year.

Every year, the Le Mans winning drivers make their handprints of which a cast bronze plaque is placed in the pavement of the Le Mans pedestrian streets a year later. André Lotterer, Marcel Fässler and Benoît Tréluyer, who in 2012 won the 24-hour race for the second time, were guests at the unveiling ceremony of the plaque on Monday. In attendance as well were ACO President Pierre Fillon and Mayor Jean-Claude Boulard.

Nissan power holding strong on a sad day for racing