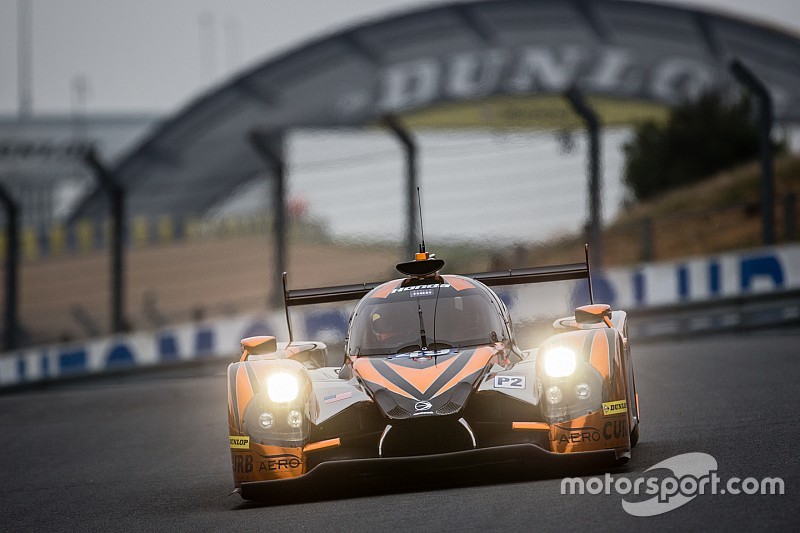 Michael Shank Racing, with drivers Ozz Negri, John Pew and Laurens Vanthoor, successfully completed its initial run at the 24 Hours of Le Mans, overcoming adversity in practice to lead the P2 class in the early laps of the famed race in the Ligier JS P2 Honda, and finish ninth.

Drivers John Pew, Ozz Negri, and Laurens Vanthoor piloted their Honda-powered Ligier through a wide range of conditions, including a sudden shower just before the scheduled green flag that resulted in the race starting behind a safety car for the first time in its 80-year history.

After overcoming a crash on the test day leading into the race week, the Shank team qualified an excellent fifth in the 23-car LMP2 field, the largest class in this year’s race. MSR was again tested when a cracked oil pan, discovered following the first qualifying session, necessitated an engine change and resulting five-minute “stop-and-hold” penalty to be applied during the race.

But the rain in the early hours of the race provided an opportunity for the Honda-powered team and starting driver Vanthoor to shine. Coupled with a courageous tire selection from the pit wall, Vanthoor’s pace in the wet saw the team lead the LMP2 class at Le Mans in its debut appearance on the 8.47-mile circuit.

MSR continued in the lead until the third hour, when a punctured tire forced the Ligier Honda to the pits.

The team elected to serve the “stop and hold” penalty at this time, dropping it deep into the field. But MSR pressed on, cycling through driver changes, pit stops for fuel and tire changes. As the hours passed, Pew, Negri, and Vanthoor moved up in the running order, featuring a long, multi-car battle for 10th that raged throughout the night.

With its Le Mans campaign completed, the Honda-powered MSR team now returns to the 2016 WeatherTech SportsCar Championship, which resumes July 3 with the Sahlen’s Six Hours of the Glen, at Watkins Glen International Raceway in upstate New York.

Ozz Negri (#49 Michael Shank Racing Ligier Honda): “It was amazing. I researched so much about this. I talked to veterans of the race a lot. You learn so much in your first time. You experiment every lap and you try different things in different conditions. It’s absolutely awesome. I still think it will take a while to sink in about what we have accomplished. I went far and beyond with my cell phone – I took pictures and videos of everything. Those memories will stay forever. I’m blessed to have done this. The crew was amazing. Everything was new for them and they were flawless. They’re always smiling, they have a great attitude and they make the adversity so much easier to go through.”

John Pew (#49 Michael Shank Racing Ligier Honda): “Our goal was to finish this race. It was our first time here and we didn’t have too many mistakes. The team did fantastic. The fans and people here have been great. The whole experience is just unbelievable and you can’t describe it until you’re here and you actually feel it for yourself. Michael Shank Racing is a ‘never give up’ team. I’ve known these guys for at least 10 years and that’s why I’ve been with them all this time, and why I was glad to bring them over here with me and do this. They are great people.”

Laurens Vanthoor (#49 Michael Shank Racing Ligier Honda): “It’s really awesome. Finishing at Le Mans is always something special. To be honest, we had zero issues with the car or the engine or the chassis in the race. We were able to put in some fast times without problems. I’m happy for the team and happy for Honda. I think we showed that we are here. We finished with a good result. If you look around at all the people that are here and just think about all of the history of Le Mans, that’s what makes it special. If you win Le Mans one day, you’re a part of history. It’s one of the biggest sporting events in the world.”

Michael Shank (team owner): “It’s really nice to finish the 24 Hours of Le Mans. We led, which is a really exciting moment in our careers. We stayed in the fight and we battled a penalty and just some little things that put us back. We had nothing major go wrong. At the end of the day we just kept plugging away, and we got a top-10 in our first time here at Le Mans. I am really, really grateful to John and Stephanie Pew for being so committed to this. We also had some of our team sponsors here with us this weekend and that was awesome.

It’s all worth it. It’s a major accomplishment in our lives. We started as just a Midwestern guy with a two-car garage and a Bugeye Sprite in Gahanna, Ohio. To think that we led at Le Mans and finished the race, that’s a big deal. That’s the American dream. I’m so proud and grateful to have the chance to do this and to be surrounded by the guys that I’ve got on this team.”

Murphy Prototypes at Le Mans 2016: the Pluck of the Irish