MacNeil is ready for 24 Hours at Le Mans

MacNeil will start from the fifth row in LMGTE-Am in the Larbre Competition No. 70 WeatherTech/Chevrolet Corvette C6.R.

LE MANS, France, (June 20, 2013) - Cooper MacNeil is ready to take on his first Le Mans 24 hours in the Larbre Competition No. 70 WeatherTech/Chevrolet Corvette C6.R. The No. 70 WeatherTech/Corvette will start from the fifth row in LMGTE-Am for Saturday's 3 p.m. local time start.

The University of Colorado at Boulder college student took to the track on Wednesday to make his first official laps in preparation for this weekend's twice around the clock race. The rain had just cleared and the track was still drying as the 20 year old Le Mans rookie took a measured approach to his first laps of the week on the 8.4-mile circuit.

"My first stint in the car Wednesday was on a drying track and I was on new Michelin slick tires," MacNeil said. "It had just rained and the dry line was just starting to form. I was getting familiar with the car again from the test on June 9. During that test most of my laps were in the pouring rain. Today I was focused on methodically getting up to speed, taking it one step at a time. As a rookie at the race and new to the team, I am being conservative with my approach and working my way up to speed."

A host of accidents caused the stoppage of practice during both of Wednesday's sessions, limited the team's track time. 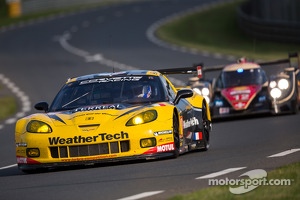 "I was supposed to do three stints on Wednesday, but really only did one," he continued. "I got in after the dinner break and was going down the Mulsanne shifting through the gears, as I went from fourth to fifth the right rear tire blew just before the first chicane. I was able to get the Corvette slowed down and limped the car back to the pits being sure not to cause any damage to the suspension or body work. The red flags really limited our running on Wednesday."

Today, the competitors were met with a rain storm just prior to practice. MacNeil took the track after the dinner break at 10 p.m. and proceeded to knock seconds off his lap times in the Corvette on Michelin intermediate tires while making the compulsory five night laps. Later in the evening he was able to return to the circuit on full slicks for his first dry laps of the weekend.

"I went out on intermediate tires, half of the track was dry the other half was wet," MacNeil explained. "The car was great on both sections of track on the intermediate Michelin's. Later in the evening I was able to go out in the dry, finally. It was good to go out on slicks for the first time this week on a dry track. The original plan was to do four laps, but I had an out lap, once by and then in because of a red flag. It was too bad because the track was finally dry. The WeatherTech Corvette is fun to drive! I am getting comfortable in the car, with the track and with my teammates Philippe Dumas and Manuel Rodrigues . I can't wait until the race."

Audi locks out the front row!

MacNeil has educational Le Mans 24 Hours in the WeatherTech Corvette